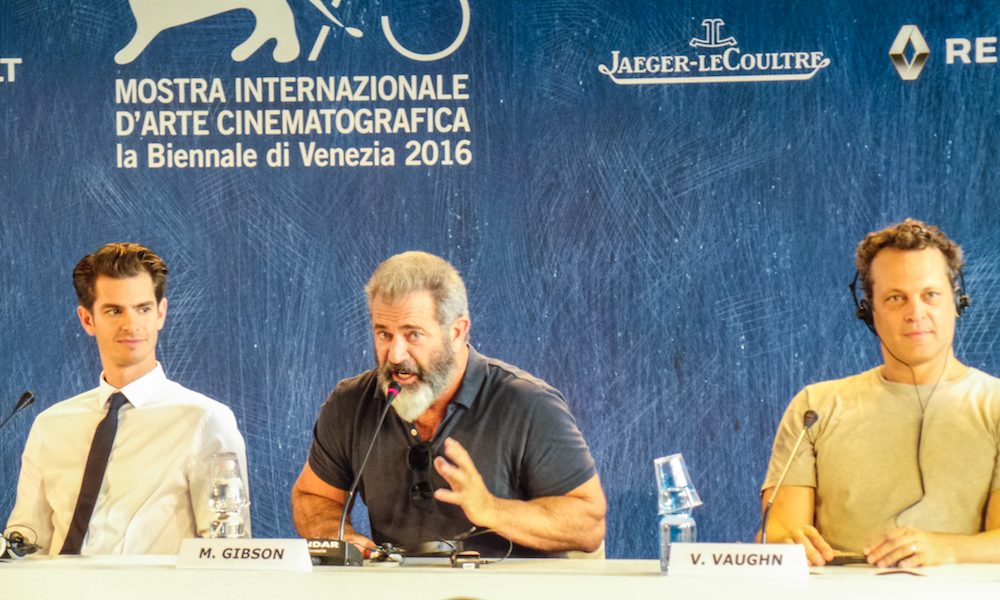 Mel Gibson directs Hacksaw Ridge, a war drama based on the life of Desmond Toss (Andrew Garfield), the first ever conscientious objector to be awarded a medal of honour. The American army medic became a hero as he saved the life of 75 comrades during the World War II battle of Okinawa.

Is this a movie about moral struggle?

Mel Gibson: It’s more about…taking an ordinary man and having an ordinary man doing extraordinary things in incredibly difficult circumstances. It’s the making of legendary storytelling. His struggle is singular, he is a man in the worst situation possible, in the midst of hell on earth, and he’s armed with nothing more than faith and conviction and he does something extraordinary and supernatural. That I think inspired me. As a storyteller…we want to tell stories of that kind of people.

What’s your relationship with Hollywood, currently?

MG: One word for my relationship? Same word everyone uses…survival!

Considering the international terrorism and present wars, what does it mean to be a conscientious objector today?

Andrew Garfield: It’s a massive question impossible to answer. I think we need to ask that question moment to moment, day by day, and I don’t think there’s a simple answer. Desmond was a simple man, he had a knowing in his heart that he wasn’t supposed to take another man’s life. So he found his personal genius path to do that. It’s a pretty wild time society speaking, there’s a lot of violent uprising and separation and war ideologies that are paining our beautiful planet right now. The idea of live and let live, no matter what your ideology or value system is. His core value is to operate from a place of love, you can’t really argue with that. We could all learn a thing or two from Desmond.

Braveheart has entertaining, ambitious battle scenes. How did you approach those in this movie to avoid clichés? And why didn’t the Japanese cut the net?

MG: I guess they wanted to catch more fish… I actually thought about it, I took some film licence and sidestepped. The important thing with battles and depicting them is to be clear. Give the impression of chaos but you need to be clear. You have to approach it like a sporting event. It sounds mercenary to talk about battles like that, but the risk is that it becomes less entertaining and people are less involved.

How did you find working with Mel Gibson and how did you develop the character?

Hugo Weaving: I absolutely loved working with Mel because he has a fantastically free-ranging mind and a wonderful kind of energy that is palpable. I found working with him was more about what he conveys with his body language rather than what he says. [That way you] keep exploring actually. There was little dialogue about the scenes.

MG: With actors of this calibre you just have to stand back and let them do it, it’s like being a traffic cop. That’s why I didn’t say much.

Teresa Palmer: Hugo and I were actually talking about it in the morning. I found it liberating as an actor. He trusted our instincts and he also has a great sense of humour, connecting with cast and crew. With the comradeliness in the set, he created a pace for us to try different things. I had such a beautiful experience.

Luke Bracey: I’m a young fella, the opportunity to work with a guy like Mel, I just wanted to be a sponge. Mixing technical with the truth, there’s a lot of moving paths…I wanted to make sure to convey emotionally and technically, something invaluable.

AG: Mel is really in the scene with you. He is always there with every single actor in every single moment, it’s just his nature. It’s like a good dad on set, or a good mum, with a natural nurturing instinct. It was a beautiful experience we all shared. In terms of Desmond, he was a very hard man to live up to, to attempt to inhabit, because of his… wet wrist – sorry my wrist went wet and I said it. Trying to live up to a man who somehow can hold on to his core, inner value, about what he is meant to be and meant to do in a culture and an environment that tells him to be the opposite, that is a rare thing we can all aspire to that living. That’s tricky in the culture where we are right now. He said he couldn’t just touch guns, a physical inability, an allergic, very difficult thing. Hopefully I tried to do that (Garfield shows his wet wrist).

Obama is trying to limit the use of weapons, is there a connection with that theme? Also, when are you actors/directors better, younger or older?

MG: When is a director or actor better? I suppose that when he is young he is better at playing someone younger. One develops ease with time, and relaxation is key. With age you just get bored, you have to relax…hopefully we get better. Not always! Sometimes you can take a big step backwards. It’s a good mix for getting better… I think the man who refuses to touch a weapon and to do something much higher and venal as killing, it’s a very high calling. I hate wars. You need to love warriors and honour them [though], the people who went to conflicts and sacrificed themselves. In Vietnam so many people were killed. A lot of attention should be paid to them when they come back, they need love and understanding. I hope this film highlights that. If it does nothing but that that’s great.

Is it about the true story of Desmond or an exploration of faith? Similarly to the Passion of the Christ in the past.

How was playing a “human” hero?

AG: Much more inspiring, [that’s] a real hero. A man who has built, has dragged men this size (Garfield drags Gibson), as skinny as I am, through mortars and shells. Not just once but 75 times. It’s like divine help. And I’m much more inspired by a story like this because of that. My brother is a doctor with the national service in London in the UK, he doesn’t get to do press conferences and doesn’t get applause. He raises three beautiful kids with his wife, serves patients, stays three hours after work. This is heroic and he is not looking to be a hero. And that’s what Desmond did, he focused on his part. He didn’t want a movie to be made about him. So how do you make one? You just try to be authentic.

MG: The difference between real superheroes and comic book ones is that real ones didn’t wear spandex.

At some point the film reminds of Schindler’s List’s “I could have gotten one more person”. Do you prefer to express yourself through directing or acting?

MG: A person doesn’t have greater love than giving his life for another person. He valued his brothers’ lives more. That’s the greatest expression of love. Acting/directing is the same process, it falls under the general heading of storytelling. Andrew was the core of this game, he is the ball carrier, I’m the guy on the side that calls the plays. I enjoy directing more I think, because maybe I’m maniacal…I love to see stories the way I see them and if anyone else can help me see them better please come aboard. That’s why we have these wonderful actors and really cool producer, and the production design, and special effects guy.

How did you work on the love story between Desmond and his wife, and her acceptance when he goes to war?

TP: I came into this process after battle sequences had been shot for three months. By that time Andrew had done a lot of research into the characters. I was really blessed. I had photos, footage…Andrew and I became really close and we fully trusted each other. What I thought was really special – and probably my favourite part – was this photo Andrew showed me, awhere Desmond’s wife  is dressed up in his clothes. That was it, that was the key. There’s lightheartedness in these two people, it’s important to inject this love, the spirit between them. We worked really well together. We believed in their love, the authentic love they shared.

How did you choose the cast?

MG: I don’t actually ever read anyone. Even if you talk with someone over Skype you get an idea of who they are. I was hoping… I knew Andrew was interested, that was a big thing for me because I saw him in other things and he is capable of a lot and [what he does] is very subtly done too, he doesn’t need much dialogue. That was the ideal casting, I couldn’t have found anyone better. Teresa, look at her, she’s so warm and real. Hugo…I had to beg Hugo! He said no. So I said, “Please Hugo,” and he said yes. Luke, look at him, he is a lady killer. It was easy to cast. I was excited to work with them. If you have the right people, no need for steering, they do it.