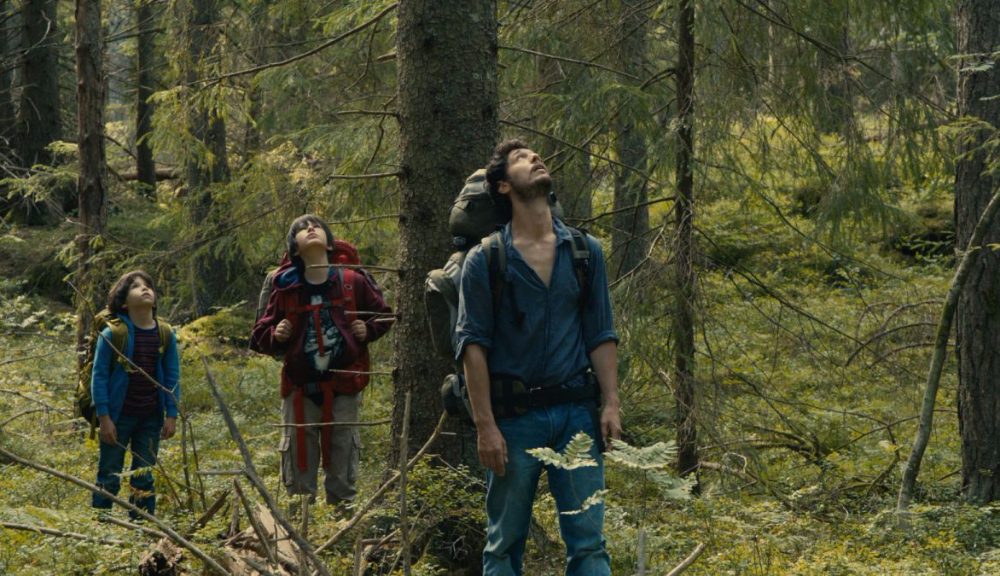 The French/Swedish film Into the Forest, directed by Gilles Marchand, is a Stephen King-inspired supernatural and psychological thriller told from the perspective of a small boy. With a slow building storyline and mounting tension, mystery is maintained until their father’s insanity becomes increasingly apparent.

In the opening scene, young Tom (Timothé Vom Dorp) tells a child psychologist he has premonitions and worries about his upcoming trip to a house in a Swedish forest with his brother Ben (Theo Van De Voorde) and father (Jeremie Elkaim). The youth’s frightening visions and his father’s claim that he never sleeps set the stage for bizarre and terrifying events to follow. Insisting he and Tom are alike in never sleeping and in their psychic abilities, he continuously tests the child’s mind-reading capacities; however, since it is obvious the boy is, in fact, sleeping, his father’s illness becomes evident. Progressively becoming more domineering, he announces he wants them to stay with him in the forest forever,  preventing them from calling their mother, and the children catch on that they’re in trouble. With the classic horror element of Tom’s visions of a monster, the true terror is that it may be their father who is the real monster.

An accomplished little actor, Vom Dorp beautifully plays the wide-eyed innocence, fear, dread and confusion of a child confronted with things he does not understand and trapped by an apparently insane parent. Van De Voorde performs well as his skeptical older brother, and Elkaim is convincing in his subtle revealing of psychosis, after initially appearing rational and sane.

Nods to Stephen King are made with Tom’s fears of the dark and the devil, spectres of monsters within, and a trusted adult losing his mind. References to The Shining are manifest in the narrative, and in such clearly borrowed scenes such as Tom walking through an eerie hallway.

With cinematography conveying the vast remoteness of the forest with sweeping shots, camera angles, editing and sound create a foreboding atmosphere. Somewhat slow in parts and with scenes that could be tighter, it might have been preferable to gradually build up to the movie’s conclusion, as the point of the story is not revealed until the end, the realization of which makes it seem like a much better film. As a whole, however, Into the Forest is intriguing suspense.

Into the Forest does not have a UK release date yet.

Watch the trailer for Into the Forest here: