Pride and Prejudice: An interview with Joannah Tincey and Nick Underwood 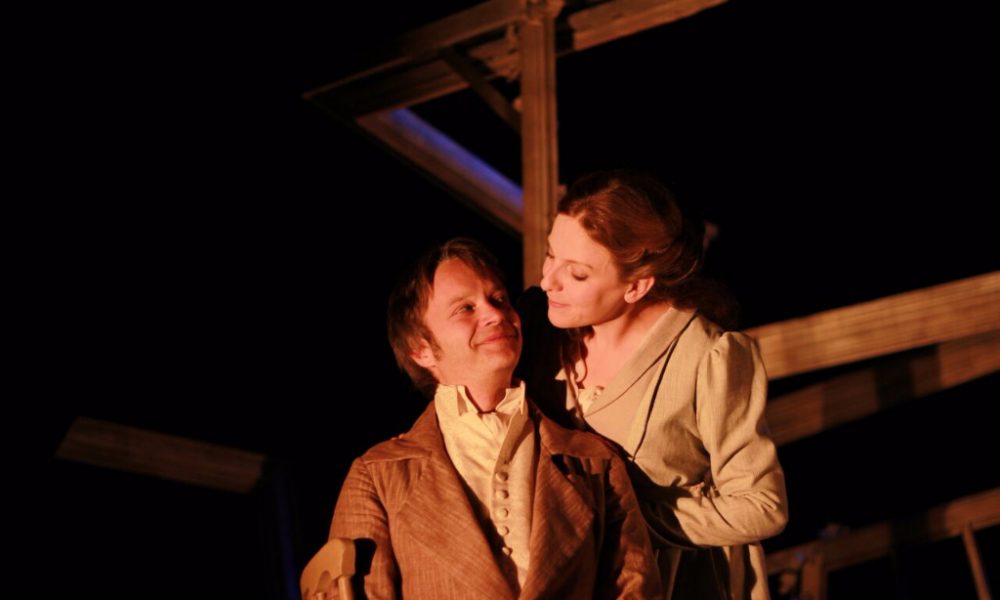 Pride and Prejudice: An interview with Joannah Tincey and Nick Underwood

Following a UK tour, Joannah Tincey’s highly praised and enchanting retelling of Pride and Prejudice will be playing at Jermyn Street Theatre in the run-up to Christmas. Over 200 years after it was first published, this adaptation brings Pride and Prejudice to life with just two actors. Using nothing but Austen’s text and their own ingenuity the actors illuminate the novelist’s words in a fresh and relevant way for the modern viewer. Fun, fast and, most importantly, romantic, this production sparkles with wit and style, offering a brand new interpretation of one of literature’s greatest love stories. Tincey stars in this Austen classic alongside her husband Nick Underwood.

When did you both first read Pride and Prejudice, and what were your first impressions?

Joannah Tincey: I think I was about 17 and I was caught up in the romance of it (no doubt fuelled by a great appreciation of Colin Firth’s iconic Mr Darcy). In re-reading the novel later in life, I was more struck by Austen’s acerbic wit. It was all much funnier than I remembered.

Nick Underwood: When I was 16. I was surprised by what a page-turner it was. I loved the story, the characters and the dryness of the humour.

How do you think audiences will react to this new interpretation of a classic?

JT: Well part of the fun of any theatre piece is playing for a different audience every night, so I wouldn’t want to predict or pre-empt a response really! We’ve loved the amazing audiences we have had for the piece so far though – they have all been very positive.

NU: It wouldn’t be live theatre if I could predict that. Every audience is different. But previous feedback suggests that for those that know the novel, this play brings it to life in an engaging and entertaining way. The story is somehow clearer and more meaningful for its sparsity of actors. It’s easier for two performers to be “on the same page” than for a cast of 21.

Would it appeal to those who aren’t familiar with the novel as well?

JT: Pride and Prejudice is a classic: the characters and the story are so vivid and immediate they’ve become iconic. Our aim is to bring that to life in a theatrical context so that we can take the audience on a journey with us, whether they have read the novel or not. We’ve had lots of audience members along who don’t know the novel or indeed any of Austen’s work at all and they’ve been with us every step of the way – thank goodness.

NU: I’ve spoken to a few people who hadn’t read the novel or seen any TV or theatre versions. They were all really stimulated, entertained and moved by it and I think that’s because [our adaptation is] a faithful and inventive rendition of a genuinely brilliant story that says universal and timeless things about human relations and social conditions. The “two actor” element and the representative style of the set also asks a lot of their imagination, which means they have a creatively fulfilling experience too.

With several famous portrayals behind them, how did you go about creating your own versions of Elizabeth Bennet and Mr Darcy?

JT: I think you have to start with the text and your response to it. For me, it was this idea of Lizzy coming to know herself that was an interesting way into playing her. That sense of trying to find a place for yourself in the world that aligns with your passion and your sense of what is just… but then realising that you might have been hasty or impulsive in your judgement of those who don’t fit your vision of what is right – I really related to that.

NU: By reading and re-reading Austen’s words. There’s so much depth to each character not just in what they say and do but crucially in the beautiful, incisive irony of Austen’s multiple narrative voices.

Has it been daunting playing two such beloved and famous characters?

JT: Well, it was more daunting creating 21 characters between us!

NU: Not really. Mostly because your work is cut out in just nailing each movement of the story and playing the characters in as truthful a way as possible, so as to make that story credible and come alive.

What was it like adapting the novel for just two actors onstage? Did you encounter any difficulties?

JT: Of course! In order to make it a realistic length for theatre some beloved scenes and even characters had to go. But I held on to the fact that I was able to retain the purity of Austen’s language. Our characters talk to the audience using her third person narration so, unlike in other adaptations, I didn’t need to invent new text. It was a bit like doing an enormous but very rewarding jigsaw puzzle. I had to keep in my head the arc of the whole story and how the characters would share the telling between them. I wanted to preserve the integrity of each character and balance all those double acts in a way that built audience involvement through the play.

NU: It brings the original work into sharper focus than other adaptations because all of the words are Austen’s and it includes lots of her narrative with characters narrating their own stories. It’s truer to the novel than any previous adaptation and has Austen’s great breadth of humour and perspective as a result. And it’s all served up in two hours of intensive entertainment. Crucially, this production requires the audience to exercise their own imaginations to an extent that no other adaptation I know of has. When an audience is that creatively engaged, the experience for everyone is heightened and more communal.

What new perspectives does this production offer on an already well-trodden work?

JT: At its heart Pride and Prejudice is an iconic love story about two people who don’t quite see each other very clearly at first. There’s a pleasing symmetry about two actors playing those lovers and all the other characters who surround their coming together. There are just so many double acts in the novel and you get this wonderful layering of perspectives as we switch between them. Then, at the core, are Darcy and Lizzy, drawing closely to the truth about one another.

What was it like working with director Abigail Anderson and creating the world of Pride and Prejudice together?

JT: Both Nick and I had worked with Abi a number of times and she was my first port of call with the crazy notion of creating this two-handed version. The clarity of her direction when it comes to language and intention and her great ability to build a show that has a responsive relationship with an audience made her the perfect choice.

NU: Even when acting alongside the adaptor, we needed that outside eye. You can’t see the effect of everything you’re doing as a duo nor gauge fully what the audience might need at any given moment. Abi has worked with us both before so she knows what helps us. She is also brilliant with classic literature and with theatrical animations of it.

How has it been rehearsing and performing as a couple?

JT: It has been rewarding, tiring, creative, sometimes stormy… and ultimately a wonderful opportunity.

NU: It saves lots of time because the chemistry is there from the word go. We understand each other quickly and are able to be extra demanding without causing offence. You have to be careful not to take liberties, though! We met on a production in 2009 so our relationship is partly founded on a mutual respect for each other’s work.

What is the next step for both of you after this? Are you planning to play any more couples onstage?

JT: We’re thinking about future projects all the time – it’s not so much a question of playing more onstage couples (although that is lovely), what’s interesting for us is finding a classic story that benefits from a two-handed telling in a theatrical context. We’ve got lots of ideas, so watch this space and our website.

NU: Pride and Prejudice amounts to I don’t know how many pairings of characters – half a dozen at least. There are other creative plans afoot that Jo has for adaptations but they are driven by story more than by specific character pairings or couples. They have to be stories that work well told by two people of course, so they are likely to involve stories full of double acts.

Pride and Prejudice is at Jermyn Street Theatre from 30th November until 21st December 2016, for further information or to book visit here.