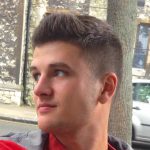 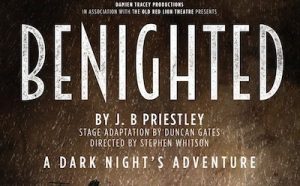 The theatre’s intimate space is here exploited through the audience’s proximity to the stage: it feels as if all 50 theatregoers are also guests, forced to take refuge in the Femm’s foreboding mansion house. This is the World Premiere of JB Priestley’s Benighted, adapted for the Old Red Lion Theatre by Duncan Gates and directed by Stephen Whitson.

Philip (Tom Machell) and Margaret Waverton (Harrie Hayes) are driving along with Roger Penderel (Matt Maltby) when the road is flooded with water. Stranded under gailing winds, they are aliens to the Welsh countryside. Sopping wet and utterly lost, the characters seek refuge in a dilapidated mansion house, where they are later joined by more weather-weary travellers, the dandy William Porterhouse (Ross Forder) and his glamorous companion Gladys (Jessica Bay). However, their hosts, the “queer” sibling double act of Horace (Michael Sadler) and Rebecca Femm (also Ross Forder) are harbouring a dark and dormant secret.

The smell of burned wax hangs on the air and an overhead glow casts precarious shadows across the gloomy furnishings. Stephen Whitson has created a sensory experience, where the audience are not only shown a storm but can also hear a rumbling, rain-splattered audio and see the flashing stage lights. The director is clearly fixated on the detail and the soggy overcoats and wet faces of the Wavertons is a satisfying nod to realism.

There is a large “Baker Street” clock nestled amid the shadows and time becomes a significant motif, highlighted through a ticking soundtrack that is played during heightened moments, such as the ending of the drama. Gate’s adaptation is ambitious, not least because Priestley was an accomplished playwright himself. Whilst Benighted does not live up to illustrious performances of shows like An Inspector Calls in the West End, it still maintains a certain pedigree.

The lighting functions effectively and scenes of darkness are juxtaposed with flickering candles, creating an eerie atmosphere in the theatre. However, the strobe lighting used during the slow motion fight scene makes the moment feel over-stylised.

Michael Sadler (who plays Morgan and Horace) delivers an assured and convincing performance as both characters; the expressions on his face make the audience laugh where some of the scripted gags fall short. There is also an unsettling moment where Harriet Hayes creates shadow puppets over candlelight and a backing track of Clair de Lune; however, the promise of a “spine-chilling” performance is never truly realised.

Benighted is at the Old Red Lion Theatre  from  6th December 2016 until 7th January 2017, for further information or to book visit here.