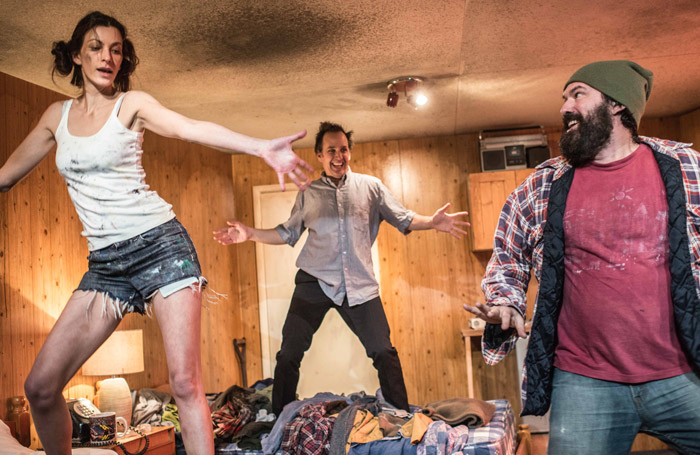 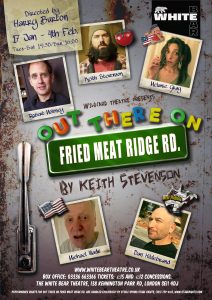 Out There on Fried Meat Ridge Rd

This play is clever, amusing and hugely watchable. The realistic motel room set and the intimate space of the theatre make the experience akin to watching a sitcom as part of a live audience. More than this, Out There on Fried Meat Ridge Rd has the magic necessary for such a show: characters inhabit the stage and in 70 minutes they become familiar to the theatre-goers, who are caught up in their lives, just as they are with those in Friends. At one point, Marlene, a meth-addicted artist, imagines David Schwimmer is in the room, demonstrating the piece’s awareness of the intrusion of popular television characters into our homes. However, this is not just a crass hillbilly farce; like comedy golds such as Father Ted the script plays off the specific location and explores morality through the quirks and customs of the characters, making it a laugh-out-loud human satire.

Set in West Virginia in a motel room, the story follows a day in the life of JD, a kind handyman who, despite his ignorance in some matters – he believed his mother’s tale that his father was Jesus – proves his innate goodness. People are constantly popping into his room to share their troubles or cause drama. Mitch enters this world after reading JD’s advert in the paper for a flatmate. Though it proves to be far from a normal day, the situation is not played as over-the-top. Instead, humour is created through the strength of characterisation and the actors’ ability to respond to each other.

The White Bear pub is an appropriate venue for the production, which is the kind of entertainment perfect after a good meal or drink, and Out There on Fried Meat Ridge Rd leaves the audience feeling both uplifted and entertained. One women said she had not laughed so much in ages, which sums up the experience.

Out There on Fried Meat Ridge Rd is at the White Bear Theatre from 17th January until 4th February 2017, for further information or to book visit here.

Out There on Fried Meat Ridge Rd