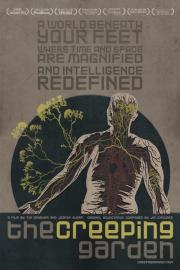 Whoever said that films about creepy crawlies weren’t educational clearly has missed out on this scientific feature-length documentary on the spectacular plasmodial “slime mould”. Tim Graham and Jasper Sharp’s The Creeping Garden immerses audiences within the fringe study of mycology, and shows us once again how humanity stands to learn so much from something so small.

The premier piece of information here is that slime mould, as it is known, is not actually a fungus, but a collection of single-celled organisms that have the freedom to move and adapt, with an almost surreal intelligence of their own. They are discovered living on decaying life forms such as trees and animals. Interspersed with beautifully shot time-lapse cinematography, we are shown how these creeping gardens almost inhale and exhale, with inner rivers much like blood vessels or the venation pattern in leaves.

Cleverly using the clandestine power of the film documentary medium to pursue a greater purpose, the latter half of this intellectual discourse divulges the benefits the study of this phenomenon has to offer humanity as a whole. Through breathtaking footage of evolving slime moulds the viewer observes them mapping out the exact paths of human roadways between major continental cities with an uncanny accuracy, the result of which was decreed by a scientific editor: “If people take these results seriously then a mass panic will start”. The spectacular wonder of these organisms has not avoided attention from the artistic community, some of whom have learnt to manipulate the vibrational output of these cultures to create an eerie and almost classical music, even reverse engineering the process to show how music can inherently impact how these organisms grow and move.

Backed by a score of an onslaught of futuristic beeps and noises similar to Blade Runner, this moving documentary entails the ethos of fringe science: that mainstream opinion and attention, or lack thereof, does not deter the progression of study and knowledge. Masterful cinematography and honest storytelling culminate in what is a plea from this scientific community; a single voice, spoken truthfully towards the end of the film delineates the mournful crux in its totality: “If the slime moulds were eliminated from our planet we might not ever notice.”

The Creeping Garden is released nationwide on 10th March 2017 and comes to Dual Format 13th March 2017.

Watch the trailer for The Creeping Garden here: