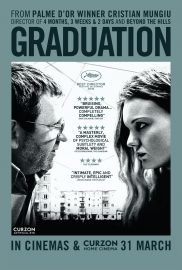 The uncertainty of parenthood is painfully wrought in Romanian director Cristian Mungiu’s latest film, a typically bleak dissection of his home country’s corrupt bureaucratic values – though one that nonetheless grips like a thriller, and leavens its tone with a resoundingly humane attitude towards its characters.

Our protagonist is Romeo (Adrian Titieni), who lives with his daughter Eliza (Maria-Victoria Dragus) and estranged wife Magda (Lia Bugnar). Romeo is a senior doctor, with powerful connections with the government and police; yet his relationship with his daughter is fraught. He wants her to excel in her upcoming exams so that she can attend university in the UK, where he believes she will have a better life and will not repeat the mistakes his generation made back in the 90s. Much as in the worlds of Michael Haneke’s sheltered middle-class subjects, though, Romeo’s world is punctured, first by a stone through his window, then by a sexual assault on his daughter at a construction site.

The viewer is not privileged to this, as Mungiu initially focuses on Romeo visiting his mistress, Sandra (Malina Manovici), then on the extent of the attack’s repercussions, which send Romeo down a slippery slope of increasingly poor decisions. Bearing a broken arm and a whole heap of trauma, Eliza understandably suffers in her exams, leading her father to use his connections to try and alter her grade. Conversations with corrupt officials are dramatised as polite affairs, with wholly understandable and even sympathetic intentions on both sides; but it wouldn’t be a Romanian drama without penance, and the negative effects snowball so quickly that hope for a happy resolution soon fades away into the distance.

The gaze of Mungiu’s camera is unflinching, and captures, in long, meticulous takes, an utterly convincing portrait of pliable human morality. Titieni and Dragus, in particular, deliver two stunning performances, investing their relationship with brittle nuances. Romeo wants the very best for his daughter, but can’t resist trying to control her life; she finds herself torn between detesting his repellent actions and being moved by his evident affection for her. Mungiu’s subject here is broader than two people, as he captures – much as he did with his previous films, 4 Months, 3 Weeks and 2 Days, and Beyond the Hills – a societal structure that is rotten from the top down. But any threats to familiarity are overshadowed by the director’s hugely impressive, precisely calibrated dramatic craft, where the central questions – namely “How should I behave?” – ring true to just about anyone.

Graduation is released in selected cinemas on 31st March 2017.

Watch the trailer for Graduation here: