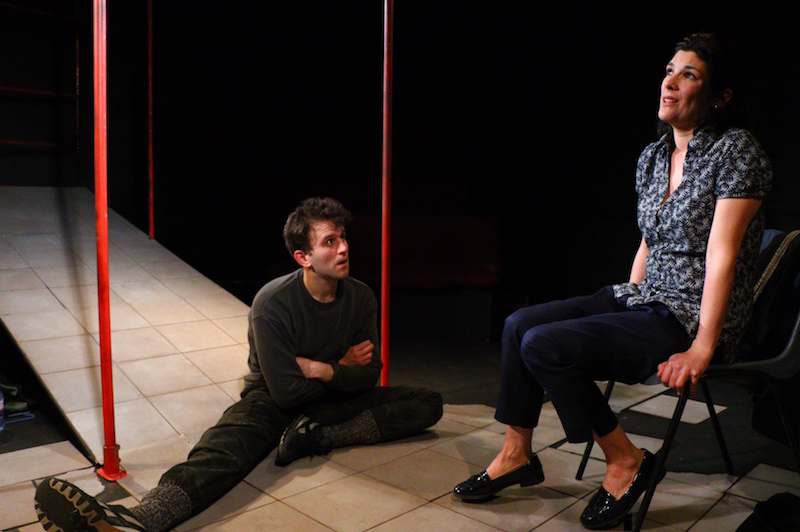 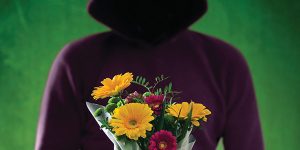 Jam is the haunting two-person play that debuts at the Finborough Theatre this May. Nestled above a quaint pub in a charming area of West London, the theatre is set in what could generously be described as a cosy lounge; this level of intimacy, however, is something that actually contributes to Matt Parvin’s tense new script.

We follow the complicated relationship connecting teacher Bella Soroush and former pupil Kane McCarthy, the story developing at a rapid pace as Kane surprises Bella at school one evening, ten years after ruining her life. Parvin skilfully navigates the line between tension and drama, gently easing the rapidly escalating anxiety he induces with a nervous humour and sly wit.

The scene is set with a postmodernist tribute to the crumbling 80s relics most schools have become, the stage design innocuously filling the space. Complete with scaffold climbing frame and disintegrating floor tiles, the minimalist styling complements the performance beautifully, with the costumes bringing a delicate touch of realism to a “less is more” approach.

The sheer power of this show rests heavily on the impressive capacity of the actors, with Harry Potter‘s Harry Melling as the horrifying Kane, and Ms Sourosh played by the stoic Jasmine Hyde. She manages to embody the calculating but impuissant archetype of senior teaching staff we all recognise, acting as the foil to Melling’s erratic and childish Kane as they delve into their unresolved history and ambiguous connection.

There’s an absence of action throughout the majority of the piece, but the emotional intensity draws our focus steadily. The gentle unravelling of both characters’ mental states is directly connected to an act of violence in their past, becoming our overarching and insidious theme. Interestingly, their recollection of the events is fogged and we find ourselves challenged to side with one or the other, powerless child or righteous adult.

Subtle use of sound and lighting tighten an already iron grip on the atmosphere, building the twist into a perfectly orchestrated stomach-dropping surprise. The creeping ideas of identity and role linger well beyond the final curtain, an impressively chilling feat that makes this production a must see.

Jam is at Finborough Theatre from 23rd of May until 17th June 2017, for further information or to book visit here.