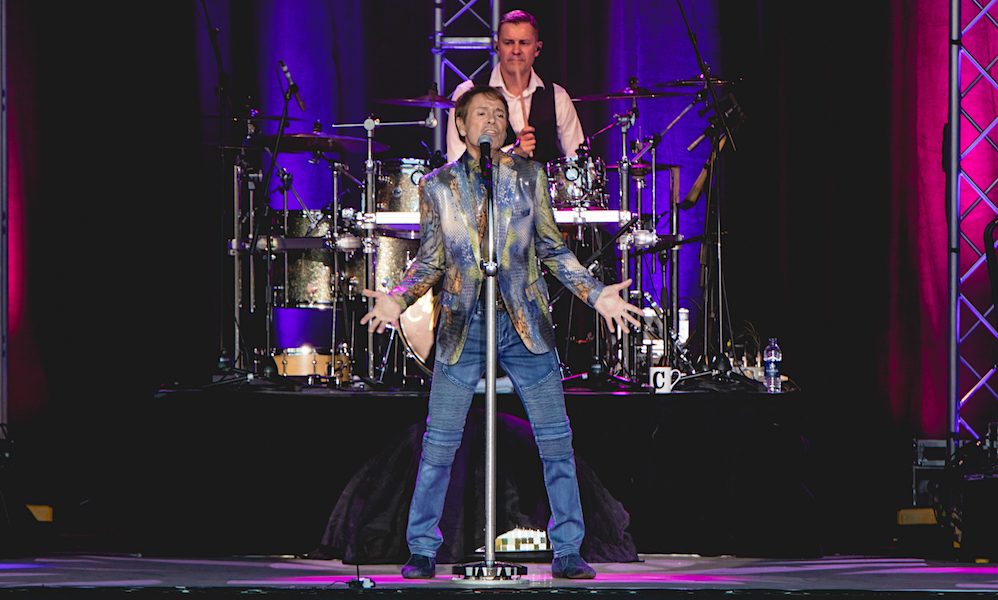 Travellin’ Light was a number one single way back in 1959 and saw the sprightly septuagenarian (he will turn 77 in October) strum an acoustic guitar while singing. Richard explained how he likes visiting America because no one there knows who he is. “They never had any taste!” he joked.

Moving around the stage to the delight of his die-hard female fans seated in the first few rows, the artist performed the title tracks of his two best-known films, The Young Ones and Summer Holiday, and both had the audience enthusiastically swaying along – especially the latter – the gorgeous guitar sound, less audible on the record, adding an extra dimension.

Miss You Nights and Ocean Deep  didn’t even make the top ten when they were first released, but now they are Richard’s two most-requested tracks. Similarly, Congratulations finished second in the 1968 Eurovision Song Contest, losing by one point to Spain’s La, La, La, but was recently voted the UK’s best ever Eurovision entry by the Radio Times. With its insanely catchy sing-a-long chorus, it’s easy to see why.

The last few years have been difficult for the popular entertainer, with false accusations of child abuse made against him. He recalled the 22-month ordeal and thanked the fans for their support, going on to sing Robin Gibb’s heartfelt Don’t Cry Alone – from the late Bee Gee’s The Titanic Requiem album – a song Richard felt was speaking to him.

There was no room for Bachelor Boy and Living Doll on the setlist, unfortunately, but timeless classics such as Devil Woman, Suddenly – a 1980 duet with Olivia Newton-John (sung here with backing vocalist Suzie Furlonger) – and We Don’t Talk Anymore did feature and provided a warm feeling of nostalgia.

Although his voice may not be quite as strong as it once was, Sir Cliff Richard’s passion, energy, and dedication to his craft puts many of his much younger contemporaries to shame. There were hits aplenty to enjoy during the evening and it was a pleasure to hear them in such an idyllic setting.