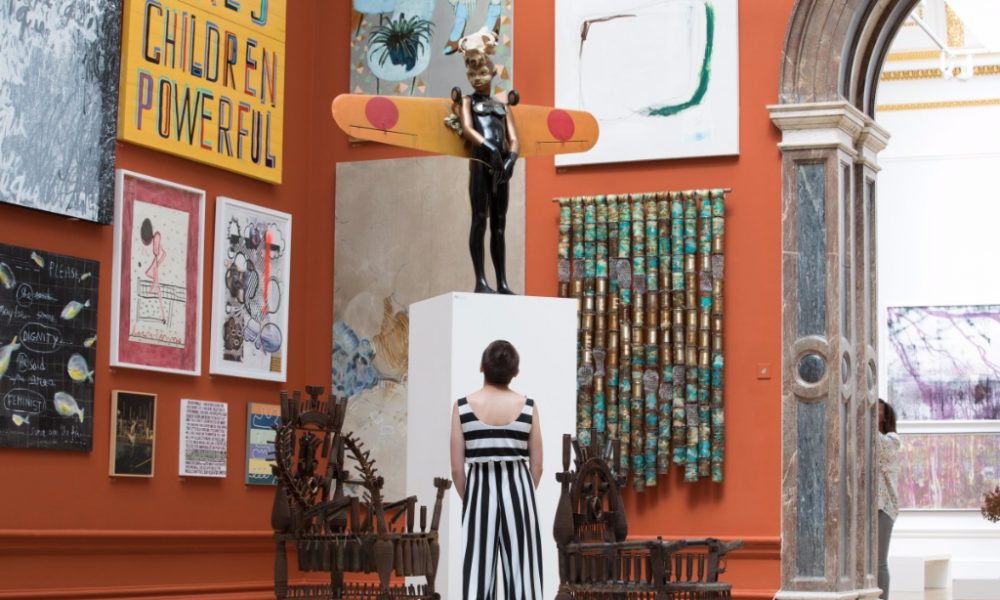 Summer Exhibition 2017 at the Royal Academy of Arts | Exhibition review

Just launched at the Royal Academy of Arts is their annual Summer Exhibition, a wonderfully diverse collection of artworks resulting from the world’s largest open submission exhibition.

The 249th edition (it has been held every year since 1769) has been coordinated by English contemporary painter and printmaker Eileen Cooper (the first female Keeper of the Academy), whose desire to embrace an international outlook and the next generation of artists is palpable in the sheer spectrum of artist nationalities – including from Congo, Peru, Spain and India as well as Turkey and Kurdistan – and artistic mediums, from figurative and observational styles of painting to drawing, prints and digital film, on display. Over 1,100 works, whittled down from 12,000 entries from up-and-coming as well as established artists, and Royal Academicians, are packed into the exhibition, starting with Yinka Shonibare RA’s striking six-metre-high sculpture of fabric Wind Sculpture VI. This is the first sight to hit visitors as they enter via the Annenberg Courtyard, an architecture gallery curated by Farshid Moussavi RA with a focus on construction coordination drawings, and Gilbert and George’s wonderfully gaudy graphics-style Beard Speak Series. There are also new films by filmmaker and installation artist Isaac Julien and those hitting the exhibition on a Friday evening will be treated to a first-time lineup of performance art.

A fantastic antidote to the perceived inaccessibility of often minimalist exhibits of contemporary art, we challenge any viewer to not find something amidst the explosion of colour and jungle of sculpture, paintings, photographs and prints they cannot connect with, with the items that stand out and stick in the mind carving out a personalised visual journey for each visitor. Some highlights are: the brilliant Henna Bikers by Moroccan-born London-based artist Hassan Hajjaj, from a collection of photos and collages centred around a fashion-forward motorcycle gang of women in Marrakesh, the Kesh Angels; Barbara Rae’s emotive semi-abstract Achill Beach; the feeling of London’s drizzle caught in Bill Jacklin’s Umbrella Crossing IV; the striking provocation of Abe Odedina’s afro-haired school girl brandishing long-bladed scissors against a Union Jack in Deep Cut; the colourful doodle-like crayon portrait by Francisco Vidal in Free No 6; the bright simplicity of the giant Aqua Button Flower by Donald Sultan; the intuition-driven scrawlings of Luciana Meazza in Blackboard (2016); and who could miss Bob and Robert Smith’s strangely poignant in these troubled times slogan, There Is Still Art There Is Still Hope.

While many art critics may turn up their noses, the hanging of amateur and professional works in one great melange brings an exciting freshness and liberation from the often narrow confines of what contemporary art can be. In a climate of increasing closed mindedness, such a colourful celebration of inclusion through the medium of art is not to be missed. Plus you can pick up an artwork of a future maestro for a bargain price and support the next generation of Royal Academicians while you’re at it.

Summer Exhibition 2017 is at the Royal Academy of Arts from 13th June to 20th August 2017. For further information, including a full programme of events, or to book visit here.