The Blues Brothers – Summer Special at the Hippodrome 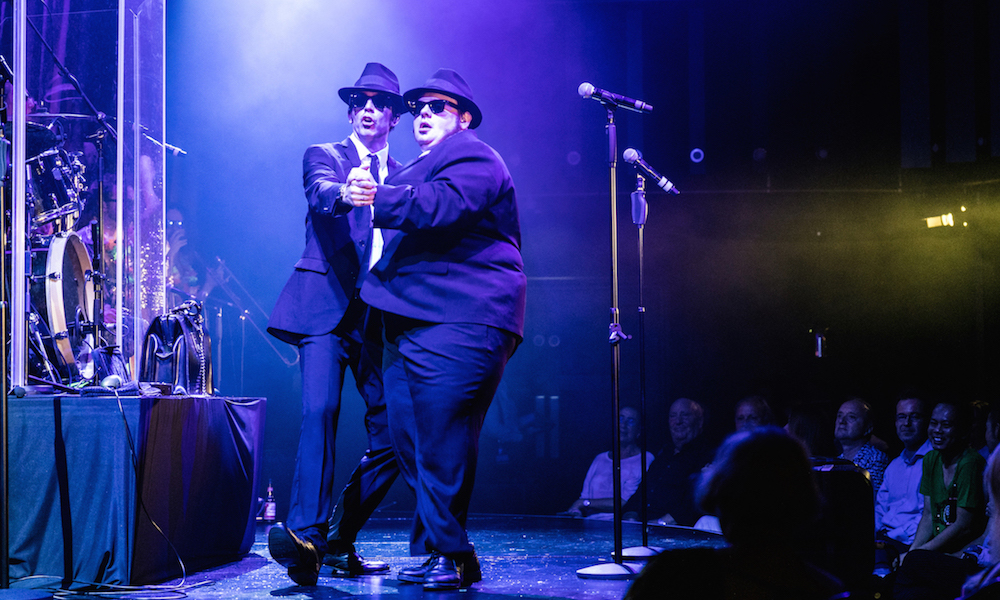 The Blues Brothers – Summer Special at the Hippodrome | Theatre review

Legendary Saturday Night Live stars Dan Aykroyd and John Belushi formed the classic Blues Brothers duo, now superbly re-created by Joshua Mumby and David Kristopher-Brown in the combo concert/musical The Blues Brothers – Summer Special at the Hippodrome. It’s an incredibly fun show, the artists catch the vibe of the original act with perfect precision and the entire ensemble is excellent. Within the relaxed, sophisticated and convivial atmosphere at the Hippodrome Casino, the theatre has a distinctive Vegas/Nashville style, an ideal venue for The Blues Brothers.

With two guitars, drums, piano, saxophone, trumpet, trombone and a couple of back-up singers, the performance is terrific – it knocks you off your seat and gets you dancing. All the vocals are top-notch, and the two female back-up artists, Helen Hart and Hannah Kee, wow you with their outstanding solos. The choreography is also excellent.

Showcasing mostly Blues Brothers classics including Rawhide, Gimme Some Lovin’, Hey Bartender, Do You Love Me, Riot in Cell Block Number Nine, Jailhouse Rock – combined with some other well-known hits – Mumby and Brown are hilarious as well as supreme singers and dancers. Selections like Under the Boardwalk, Dock of the Bay, Twist Again, Let the Sunshine In, Heat Wave, mix vintage numbers from the ‘50s to the ‘80s. The duo’s deadpan rendition of Loretta Lynn’s Stand By Your Man is priceless.

Mumby as Elwood is delightfully crazy and plays awesome harmonica – and Brown as Jake Blues hams it up beautifully: he’s Belushi and more. Arnold Mabhena is admirable as Ray, a James Brown look-alike/quasi-Ray Charles and a gospel singing preacher: “Do you see the light-ta?” Hart and Kee’s presentations of songs like Aretha Franklin’s Respect and Tina Turner’s Proud Mary are powerful. A waitress harassed by a customer belting out Franklin’s Think is a brilliant explosion of energy. The production contains clear nods to Saturday Night Live in its variety of musical sketches and elements such as Elwood and Jake wearing Bee costumes.

After concluding with the duo’s signature song Soul Man last night, all chanted “one more song!”, and we were treated to Elwood’s wonderful tongue twister Rubber Bisquit as a finale. A big rock ‘n’ roll party, The Blues Brothers – Summer Special is a seamless production with first-rate performances and musicianship – it is vivacious and outstanding fun.

The Blues Brothers – Summer Special is at the Hippodrome from 18th July until 26th August 2017. Book your tickets here.

Nina – A Story About Me and Nina Simone at the Young Vic | Theatre review
BBC Proms 2017: Celebrating John Williams at the Royal Albert Hall | Live review