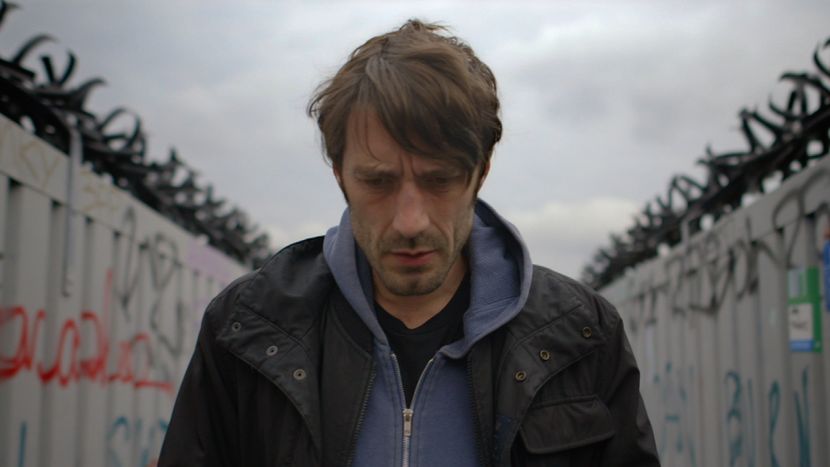 Gareth Tunley’s debut film The Ghoul is an ambitious attempt at producing somewhat of an amalgamation of a Lynchian psychodrama and a detective narrative subplot. It tells the story of a reticent detective, Chris (Tom Meeten), and his journey into psychological meltdown after going undercover in an attempt to investigate a mysterious double murder. A supposed burglar has entered the home of a sinister psychiatrist couple (fairly conventional); yet a forensics check suggests that – despite the various gunshot wounds, even to the head – the couple in fact began to approach the intruder without falling to the ground. The introductory scene, despite the mysterious “head-scratcher”, seems conventional, and one can envision the detective story unravelling naturally.

However, any preconceived ideas of typical detective stories are subverted in Tunley’s film, and quite quickly. Chris is a particularly difficult persona to decipher at the beginning, and his ominous silences create a sense of unease. As the character begins appearing at psychotherapy sessions undercover, he meets Coulson, a sufferer of bipolar who has the same psychologist for his sessions. Here, in a drug-induced relationship, Coulson suggests to Chris that the psychiatrists that are attempting to help them do in fact have more transcendental and menacing motives behind their psychiatry; there are allusions to the occult and witchcraft – Cromwell and Möbius strips, to name two examples – and towards the denouement, the film, supposedly attempting to portray the schizophrenic state of our protagonist, descends entirely into fantasy.

The thin line that separates fantasy and reality is obscured to an extreme in The Ghoul, and at times the movie delves into experimental territory through nonlinear narrative techniques and the artsy street sequences that are interspersed throughout. This is clearly an intended technique to confuse audience perception, yet Tunley’s approach to his schizophrenic protagonist falls a little short in capturing the extent of Chris’s descent into mental illness. The cinematography also attempts to enhance this feeling of altered realities, and although there are scenes to be applauded for their visuals, the film would, perhaps, have benefited more from a documentary-style approach to capturing Chris in his environment – a move towards a social commentary on schizophrenic individuals and their interaction with society, rather than artsy sequences to kill a bit of time.

The Ghoul does well in subverting cinematic tropes associated with the detective genre, but the approach to its narrative is perhaps too vague (whether that be intended to represent the protagonist’s altered mind states or not). The crescendo into the abyss that Chris suffers could perhaps be more tentatively approached, particularly regarding the movie’s fantastical denouement. Yet, Tunley’s debut is a refreshing push for more intricate and psychologically driven thrillers.

The Ghoul is released nationwide on 4th August 2017.

Watch the trailer for The Ghoul here: