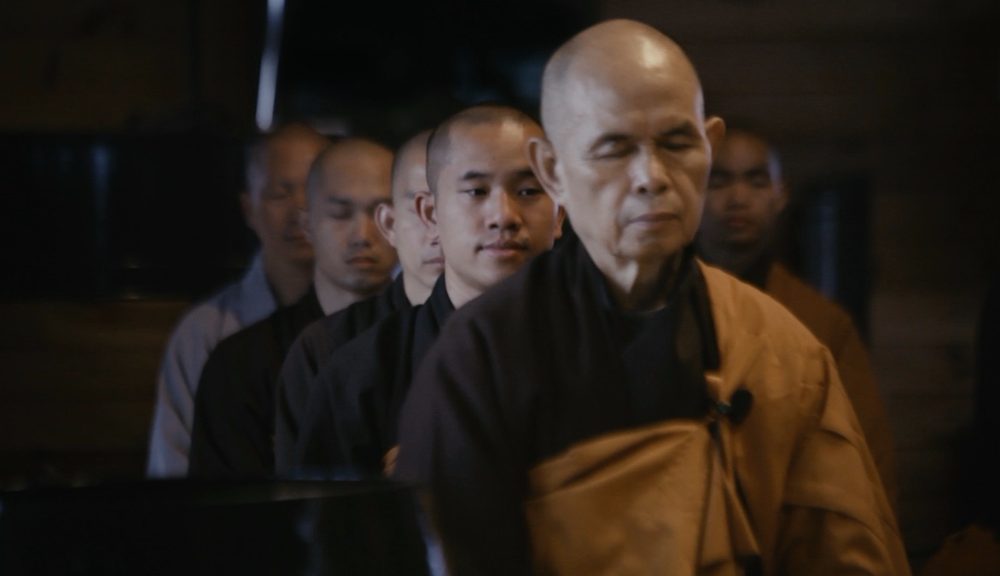 Walk with Me | Movie review

Zen Buddhist master Thich Nhat Hanh is often regarded as a pioneer in popularising Buddhism in the West and in introducing the concept of mindfulness into the mainstream. Committed to spreading the message of living in peace with oneself and others, he travelled the world to teach, lead talks and write, thus becoming a celebrity. To make a documentary about such a man is no easy feat, especially considering the fact that he does not want to be idolised. Directors Max Pugh and Marc J Francis took on the challenge of capturing the master’s teachings in a way that would emphasise the message rather than the messenger.

Walk with Me is the result of three years of shooting within the Plum Village monastery in rural France. Set up in 1982 by Thich Nhat Hanh himself, this is the place where he retreated following a forced exile from Vietnam and where he still lives today. The monks of Plum Village have given up all worldly possessions to eliminate distractions and find the true, core self that lies beneath fleeting emotions. The high level of emotional intimacy at a group of monks’ initiation ritual sets the tone for the fly-on-the-wall documentary. Tears, long silences and heartwarming exchanges act as a soft entreaty to slow down and grasp the unique beauty of the present moment.

Benedict Cumberbatch lends his voice as passages from Thich Nhat Hanh’s early journals are included to add definition to the monks’ experiences.This is not a documentary that sets out to educate or offer facts on Zen Buddhism or the life of Thich Nhat Hanh. What it does convey is the atmosphere felt within the monastic community, opening a window into a different way of life. Everyone can enjoy Walk with Me as a tribute to the spiritual leader himself and to the practice of mindfulness, and for those less familiar with the context it can act as an invitation for further study.

The beauty of the production is that it is in synergy with the principles it hints at. The directors have clearly posed themselves the same questions as the monks in regards to attachment to outcome, the power of silence and awareness. They leave behind a traditional narrative style and make the whole community, as well as nature, the protagonist. Following the pace and rhythms of the monks, the soundtrack is limited to the music played in the monastery and the bells that ring at regular intervals as a reminder to be mindful.

Graceful and touching, Walk with Me transmits its message softly and discreetly, managing to become a meditation in itself.

Walk With Me is released nationwide on 5th January 2018.

Watch the trailer for Walk With Me here: