The Birthday Party at the Harold Pinter Theatre 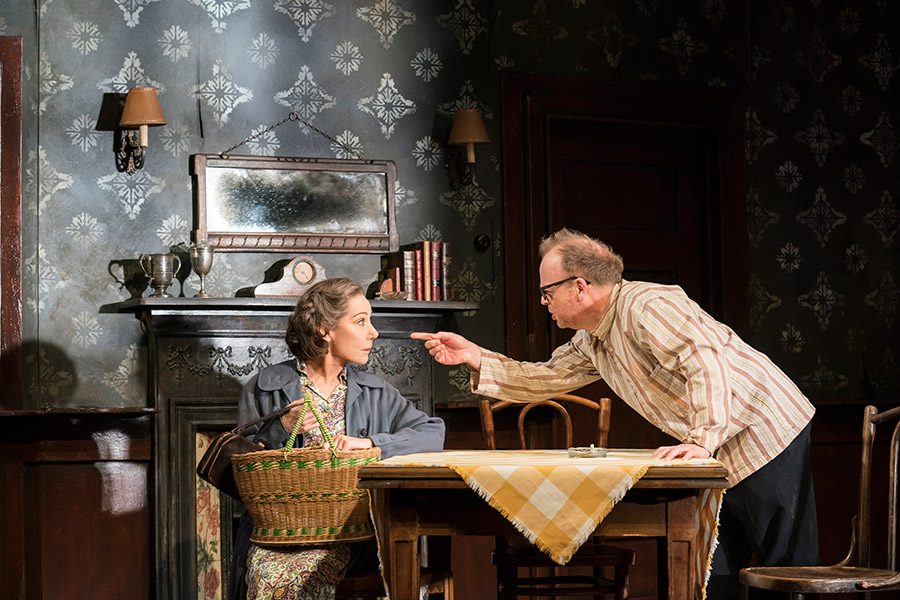 The Birthday Party at the Harold Pinter Theatre | Theatre review

An utterly unbelievable cast celebrate The Birthday Party as it turns 60 this year. The production is an unrelenting storm of haunting darkness and perfect wit.

Harold Pinter’s The Birthday Party returns to London this January, this time directed by Ian Rickson. This cryptic masterpiece is set in a small guesthouse where a man by the name of Stanley has been staying for a year. He is an odd character who is the king of his castle, doted on by the landlady, Meg. But all that changes when two men in suits inexplicably turn up to stay.

The narrative of this play is famously strange and difficult but this in no way uninteresting or unenjoyable. In fact, quite the opposite. Every moment is full of intrigue. This stormy tale explores and pokes at the mind and interpretations of memory. While Stanley struggles to remember details of where he’s come from, Goldberg, one of the suited strangers, demonstrates superiority and control over his mind by rattling off stories of his past. It is a strange clash of personalities, which digs into obscure themes. Power is another important subject; an obvious prolonged power struggle takes place between Stanley and the suited men, but Stanley appears to always be fighting for the power in any given scene.

Toby Jones, Zoë Wanamaker, Pearl Mackie and Stephen Mangan. Anywhere else on the West End, each of these individuals would be the sole leading performer. But in a rare production, all this stardom and talent can be seen in one place, alongside Tom Vaughan-Lawlor and Peter Wight, both hugely talented theatrical heavyweights.

The cast does not disappoint; it is truly a treat to see such vast amounts of talent on one stage. Toby Jones, as Stanley, is a chilling and unhinged presence. Stephen Mangan creates a powerful tension with his controlling persona as Goldberg, and Zoë Wanamaker’s innocent and dotty Meg is perfect. Together the performers lash at each other with Pinter’s sharp, prosaic wit. The show is a great spectacle of beautifully crafted dialogue that is relentlessly dark and funny.

The Birthday Party is a strange and interesting piece, well worth watching. But with this cast, it is an absolutely essential experience.

The Birthday Party is at the Harold Pinter Theatre from 9th January until 14th April 2018. Book your tickets here. 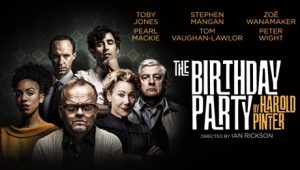