The Soul of Wittgenstein at the Omnibus Theatre 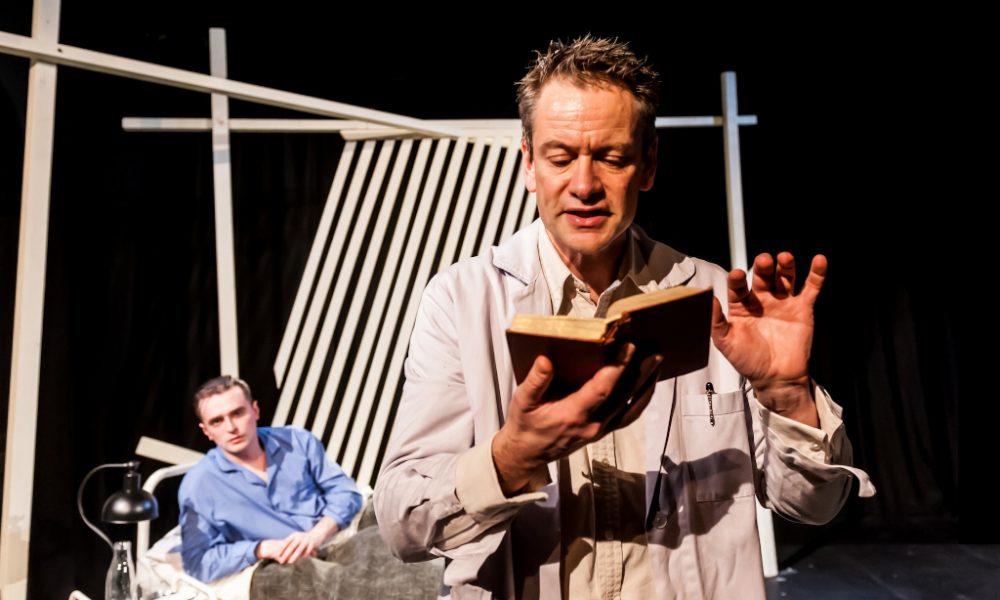 The Soul of Wittgenstein at the Omnibus Theatre | Theatre review

Curiosity killed the cat, or was it ignorance? It depends from where one looks at it. Director Dave Spencer takes us on a journey of perception with The Soul of Wittgenstein, a provocative and reflective tale where the pupil becomes wiser than the teacher.

The script was written by Australian playwright Ron Elisha, winner of four Australian Writer’s Guild Awards. The fictional piece was inspired by the life of the Austrian philosopher Ludwig Wittgenstein, who was a volunteer porter at Guy’s Hospital during World War Two. Throughout February it will be playing for the second time in London as a headliner of the 96 Festival at Omnibus Theatre.

It’s 1941 and John, an illiterate man with one leg, is lying on his deathbed. Ludwig, a meticulous professor, irons every bit of his clothes, including his socks. They are strangers, but soon become friends, confidants who share a passion for Tolstoy. Ludwig seems to have no hope of finding love, while John is eager to. The philosopher claims he doesn’t believe in love, but John questions him, just as Socrates would do. Although, Ludwig is the connoisseur and teaches John the valuable assets of reading and writing, the patient will reward him with the most important gift: the desire to live.

In this intimate setting the dialogue is certainly what matters. The acting, pulled off by Richard Stemp as Ludwig and Ben Woodhall as John, is strong and clever. Stemp’s transformation during the play from a hard-hearted man driven by reason to a tender and warm character is outstanding. So is his comical narration of Tolstoy’s War and Peace.

It is worth noting the set design by Mayou Trikerioti and Cecilia Trono, and the background music by the likes of Billie Holiday, which support the play in the most effective way, and the audience are made to feel they are in a 1940s hospital through the use of old medicine flasks. Moreover, the sensation of time passing by through light and sound effects is impressively achieved.

Both profound and philosophical, The Soul of Wittgenstein takes a man to his more primitive stage. Is theatre to think, to provoke and reflect upon the mysteries of life, of love. Because isn’t love what is worth living for?

The Soul of Wittgenstein is at the Omnibus Theatre from 6th until 25th February 2018. For further information or to book visit the theatre’s website here.