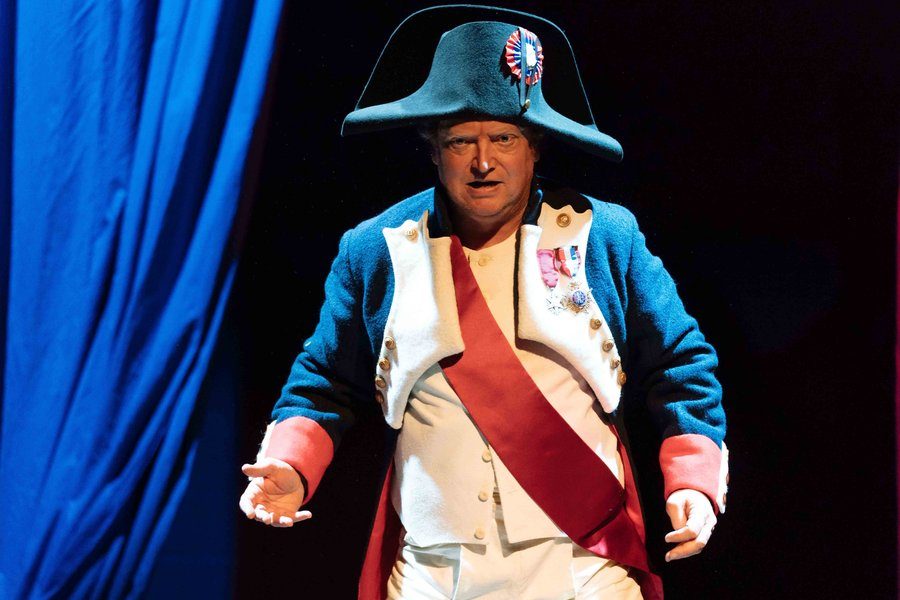 Paul Hunter is the artistic director of acclaimed theatre company Told By an Idiot, which was founded in 1993. The theatre makers have toured across the world and worked with artists including Carol Ann Duffy, Philip Pullman and Simon Armitage. The company’s latest production, Napoleon Disrobed, is currently on tour across the UK, beginning it’s run at London’s Arcola Theatre on 14th February. The play, directed by Kathryn Hunter, is a two-hander featuring Paul and Ayesha Antoine and explores what might have happened if the emperor had not died in exile. We caught up with Paul to chat about how the show came about and the importance of comedy, live performance and the imagination.

Hello Paul. What can you tell us about Napoleon Disrobed?

We describe it as a comic alternative history, in relation to Napoleon. It’s based on a novel called The Death of Napoleon by Simon Leys, which has the rather audacious premise that Napoleon did not die in exile on St Helena but managed to swap places with a double. he then attempts to get back to France to reclaim time and glory, which is obviously rather futile! It is rather odd – some people almost feel it’s some strange conspiracy theory. It’s a kind of funny, philosophical look at identity as well, and what defines us, what makes us who we are, so even though its about Napoleon it’s about all of us really. It’s quite a human story but with a lot of comedy,

I’ve heard there is quite a funny story behind your discovery of the source material?

Yes, when we first encountered the book 25 years ago – it’s been quite a long journey to bring it to stage – we were doing our first show in 1993, called On The Verge of Exploding, and I rather foolishly in that show managed to break my leg whilst dancing naked with some bananas. While I was in hospital in north London my co-founder and colleague Hayley Carmichael bought me a book to cheer me up, which happened to be this novel The Death Of Napoleon, which we all read at the time and our director John Wright suggested we do a version of it. But it just felt like the wrong time, really, we were all in our early 20s then and I don’t think it quite resonated with us until we got older. A couple of years ago I was going on tour and I took this book with me on the train and reading it again as a 50-year-old man with children I thought it struck more of a chord now about how we live and who we are. So 25 years later we are doing it!

Tell us a bit more about the company, Told By an Idiot.

So this is our 25th anniversary year actually, which feels like a kind of strange, surprising achievement to still be going! I suppose we have always set out to create work that kind of surprises – our tagline as a company is “Creating the Unexpected Since 1993”, so most of our work has come from an inspiration or an idea rather than a script. Even with this show – where we had a book – we didn’t ask somebody to adapt the book, we took the book into the room and kind of improvised around it to create the show. I suppose the place we have always been fascinated by as a company is that gap between laughter and pain, which exists in real life a lot of the time. So I think comedy has always been very important to us, and I don’t think we have ever had any interest in putting reality on stage – we have always believed that TV and Film will do that infinitely better than theatre will – so we kind of try and revel in the artifice and make-believe of theatre.

On the subject of artifice and make-believe, how important do you think “liveness” is to live art? Do you think it’s important to retain a sense of risk or improvisation?

I think it’s completely crucial, a sense of what makes something live and it’s interesting the trend towards immersive theatre with companies like Punchdrunk doing extraordinary things in warehouses, people really enjoying it because they are part of it. I think that’s all so wrapped up in the “liveness” of it, people love the whole “Secret Cinema” thing; people love being part of something – however you do it – and I think it’s also what makes theatre unique, that sense of a live event. We have always been fascinated by the idea of spontaneity and I think more and more in a digital age – as well as celebrating all the wonderful things digital can do – I think people remain fascinated by going into a room and engaging with another group of people.

So would you say that the restrictions you face – only having two actors, limited props and size of the space etc – force you to be more inventive and find new solutions to create something that would be better than if all options were open?

I completely agree, I think the restriction of what we have is a wonderful thing. We have done 15 performances so far and the main reaction from the audiences is that they love employing their imagination. So on a simple wooden platform if I really commit to being on a boat you will imagine us on that boat. You don’t need to see a boat at all but you will absolutely believe it if we commit to it. So I think that the restriction is a brilliant thing but I also think that theatre is about the imagination; it deals in metaphor the way that TV and film doesn’t on the whole, so when you employ metaphor and imagination then the audience brings something to it and has to work a little bit, and I think extraordinary things can happen. You can be transported into something in the way that maybe you can’t with other mediums.

How does your writing process work? Is it a collaborative effort or helmed by one person?

It kind of varies with each process we do, nothing is ever completely the same. For Napoleon Disrobed it was very collaborative, we had a whole room of people – everyone from the lighting director to the sound director – and were practising on the set from day one, so the set was almost like another character. We were writing on set the whole time. What was slightly different this time was we had an assistant director and a dramaturg with us who were kind of shaping the script as we improvised and challenging the structure of the script at times. We are very rigorous about how it evolves, we try to be quite bold about the choices we make. Even towards the end of the process we were focusing on not being to clingy about anything, being prepared to throw bits away if they didn’t work.

As a company, what influences did you have, both in general and specifically for Napoleon Disrobed?

I think even though this might sound contradictory to what I have been saying, I would say our biggest single influence is film, but that’s more to do with how films tell stories visually. We always try and carry our narratives through actions rather than words. That’s not to say we aren’t passionate about language, but mostly we try to convey a story through what you see. Also, a certain strand of European cinema has kind of influenced our work: directors like Fellini and Bunuel. We did a version of Casanova in collaboration with Carol Ann Duffy where we changed the role of Casanova into a woman and that was largely based on the Fellini film of Casanova with Donald Sutherland. I think the direct influence on the current piece was a Swedish director called Roy Andersson – particularly a film of his with the brilliant title A Pigeon Sat on a Branch Reflecting on Existence. We all adored that film and it kind of affected Napoleon Disrobed in terms of how we play with the contemporary and the period. For example, the poster involves me as Napoleon stood next to a huge motorbike, and I think Andersson plays very wittily with the contemporary and the period too.

So in terms of what you are talking about, the physicality and the humour, do you think it’s important to preserve the idea of silliness within performance? Do you think that’s something we are under threat of losing?

I think it’s a thing that should be seen as a kind of skill that performers have developed, and going way back– I’m reading a book about Buster Keaston at the moment and you look at some of his physicality and its so sublime, and a lot of it wasn’t his invention, but I think that tradition of physical humour is important to pass on. Also, a lot of that doesn’t exist in books or a written literary form, its more of an intangible thing, and I think if we celebrate anything it should be the skill and the role of a performer, and how the performer is always at the heart of anything we do. So yes, I do think it’s important that we keep those things alive

What’s happening with Napoleon Disrobed at the moment, and what are your plans for the future?

So we are playing in Plymouth at the moment, but next week we move to London for four weeks at the Arcola Theatre, from the 14th February to the 10th March, then off to Birmingham and Scarborough, so we’re very excited!

In terms of what’s next, we are always planning ahead and trying to spring out of a different box, so we have a show in the autumn, which is actually based on a script. We haven’t done anything from an outside script in a long time but we were approached by Birmingham Rep and a wonderful writer called Leo Butler who did a play at the Almeida called Boy, which was amazing, and he’s written a play called All We Need is LSD. It’s a really funny, unpredictable, quasi-autobiographical scientific exploration of that drug really. I’ll be directing that but it’ll be very different to this!

Well we can’t wait to see Napoleon Disrobed and your future projects, thanks for your time!

Napoleon Disrobed is at Arcola Theatre from 14th February until 10th March 2018. For further information or to book visit the theatre’s website here.

For further information about Told By an Idiot visit the company’s website here.