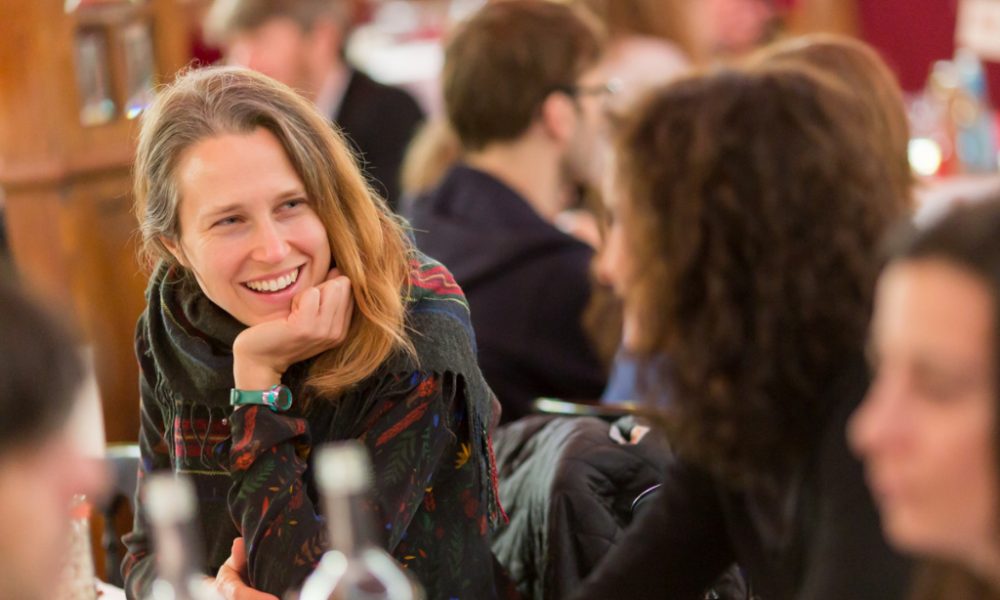 Madeline’s Madeline tells the story of a teenage girl (Helena Hawkins) who finds solace acting with a theatre troupe that helps her escape her debilitating psychosis. The story takes a dark turn when her director, Evangeline (Molly Parker), begins to take advantage of Madeline’s mental illness for the sake of art. We spoke to director Josephine Decker about the inspiration behind the film and her love of complicated endings.

I really loved the film, how did the project begin and where did the story come from?

It’s funny, I was almost about to say that I didn’t come up with the story. I worked with actors through improvisation for a year with Helena [Hawkins] and the troupe in the film. We had an incredible group of people. We would get together, once a month for a whole weekend, and workshop and go away and I would write and then we’d do it again.

After about seven months, I was like, “Oh my God, I don’t know what I’m doing”, and then I went away and wrote for about a year and then started sharing the script and getting feedback from them and others. You know it’s interesting, I originally thought we would make the film about making the film itself because I could tell that was alive and interesting and I could tell there was something going on in the room. Reflecting on what were making, being a group of adults but working with one teenager. The ethics and dynamics of that process was always a thing I was interested in looking at in this film.

The story was fascinating on its own, the visual style you chose was so dynamic. Tell me a little bit about how you reached this visual style.

Ashley Connor shot the film and she’s worked with me on all my films. She was actually part of our rehearsal process, I asked her to be with us with the actors for all those improv weekends even though we weren’t shooting. I wanted the camera to be inside of a first person experience and to do that you have to know acting.

The film deals with the ethics of working with children in an artistic environment and the risks involved. What was your dynamic as a director with the young actress? Did you deal with that on set as well as in the film?

I feel like Helena is one of my very close friends, we’ve developed a strong bond over the course of shooting this film. I think that happens through sharing a lot of experiences that are positive and negative, which we did. I would say that both of us did things along the way that were like, “Oh God, what have I done?”. There were times where we would catch each other out, going too far and I really feel grateful to the ways that she was patient with me as I was trying to figure out what the fuck we were making.

That took a long time. Also, she was sensitive and aware. There was a moment in writing the script where I felt like things were getting a little too close to reality and then we made a concerted effort to take it back and fictionalise it considerably. The character of Madeline is very much a fictional character but I think I wrote it as this idea of this director getting too close to real life because I thought I had done that. It violates both trust and the sanctity of privacy.

How about working with Molly Parker and Miranda July? How did they join the project?

They came in at the end. It was funny, we only had one day of rehearsal before shooting. I used it to do these weird, physical theatre exercises that you see in the film. We didn’t rehearse any texts, we just rehearsed weird movement. Ironically, we didn’t get a lot of time to rehearse the scenes, which I think in my next film I will change.

With Molly, I was actually looking at another choice for that character. I loved her in House of Cards. I was watching the third season and ended up binge watching it and I had spent seven hours with Molly Parker. I think having had that experience, I don’t know, you trust someone having spent so much time with their face. We met up with her and she said yes.

Miranda was different. She didn’t think of herself at the time as an actress. She’s an artist who makes her own work and focuses on that. She puts herself in her work but she doesn’t “act” in other people’s stuff. It took a little bit of begging and funnily enough she asked to be auditioned.

It all felt very fluid, would you say you gave them space to improvise?

Yes, I would say so. I like to give all the collaborators space and freedom but also guidance so that hopefully we’re on the same page. I always like it when things get a little out of control. Things start happening that I didn’t predict or set up. That’s when I feel like things really come alive. But you have to work with collaborators who are excited by that because sometimes I think that can be very frustrating and overwhelming to work in that environment.

I loved the ending. How did you end up with that twist conclusion?

I don’t like to end anything on a happy ending. I’m not just going to end it with this happy ending. I really like complicated endings that can be read multiple ways. We actually had a totally different ending initially. We edited for about a year and two months. The final ending was only decided in the last six weeks. There were initially five scenes after this one, I had a similar band-aid-ripping-off at the end though. There was more of a conclusion with the mum but it would be superfluous.

Thanks for your time!

Madeline’s Madeline does not have a UK release date yet. Read our review here.