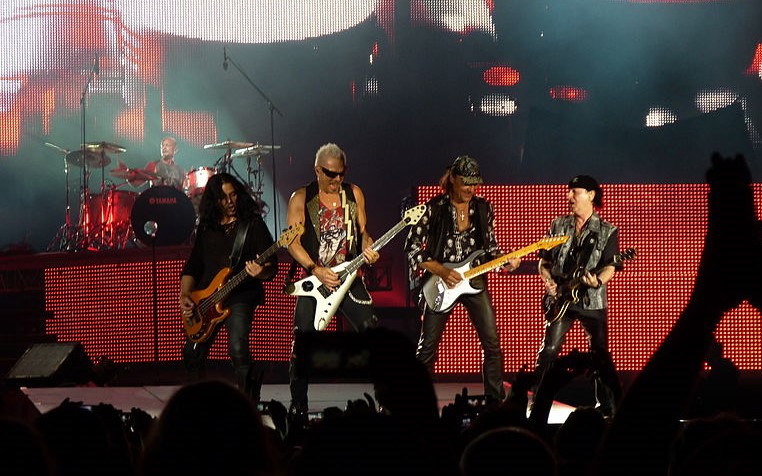 Beginning at midday, and with two stages to choose from throughout the afternoon – the outdoor Orange Amps Stage and indoor venue The Indigo – there were certainly plenty of different sounds, of varying degrees of heaviness, to suit all tastes – in theory anyway. The action then moved over to the main O2 Arena, where sets from Buckcherry, Megadeth and Scorpions closed out the day.

In 2017, there were a number of bands more familiar to long-time rock fans – Blue Öyster Cult, The Answer, Gun, etc. – in the afternoon, whereas, this year, this writer hadn’t heard of a single one.

Still, that’s not to say there weren’t some entertaining acts between 12pm and 6.25pm, which was when Buckcherry kicked things off in the arena. Dirty Thrills, for example, on the Orange Amps Stage, with their high-energy blues rock groove, were quite enjoyable to watch.

Belgian trio Triggerfinger were another group that stood out, with singer/guitarist Ruben Block and drummer Mario Goossens providing the theatrics, while hulking bassist Paul Van Bruystegem was rather more sedate in comparison.

Stone Broken may be one of the finds of this festival for some. With their infectious tunes and likeable demeanour, the quartet from Walsall, notable for having a sole female member –  drummer Robyn Haycock – in their otherwise all-male lineup, went down very well indeed.

The poor organisation meant that many people would have missed the start of Buckcherry’s set, despite getting there 40 minutes or so before it was due to start. It is understandable that the venue employs strict, airport-style security, but surely there must be a way of warning people ahead of time.

Buckcherry were pretty good, their swaggering style as welcome as ever – though singer Josh Todd’s voice didn’t seem quite as strong as usual. Great tunes, such as Lit Up, Say F**k It and, of course, Crazy Bitch helped make up for it.

Up next were Megadeth, one of the famed “big four” of thrash metal (the others being Metallica, Slayer and Anthrax) and always an exciting prospect live. Tonight Dave Mustaine and co were brilliant, stealing the show and performing the most thrilling set of the day.

Though mostly silent, Mustaine addressed the crowd later on, stating that tonight they had included songs they hadn’t played in about 18 years, including The Conjuring from their 1986 album Peace Sells… but Who’s Buying?. “This is a really old one,” he said ahead of Mechanix, a track off their 1985 debut album Killing Is My Business… and Business Is Good!. “I hope you like it. If you don’t, f**k it.” It’s safe to say most people – especially those in the well-attended mosh pit – did.

Following such a great performance was always going to be tricky, but Scorpions just about managed it, rock classics like The Zoo, Wind of Change – referred to as “a song that’s still a song of hope” by singer Klaus Meine – and Big City Nights doing a solid job of keeping the energy level up.

“It’s a good thing we’re still here,” said 70-year-old Meine at one point, perhaps addressing the retirement rumours that surfaced a few years ago, “and it’s because of you!” he added, pointing to the cheering and clearly very happy fans.