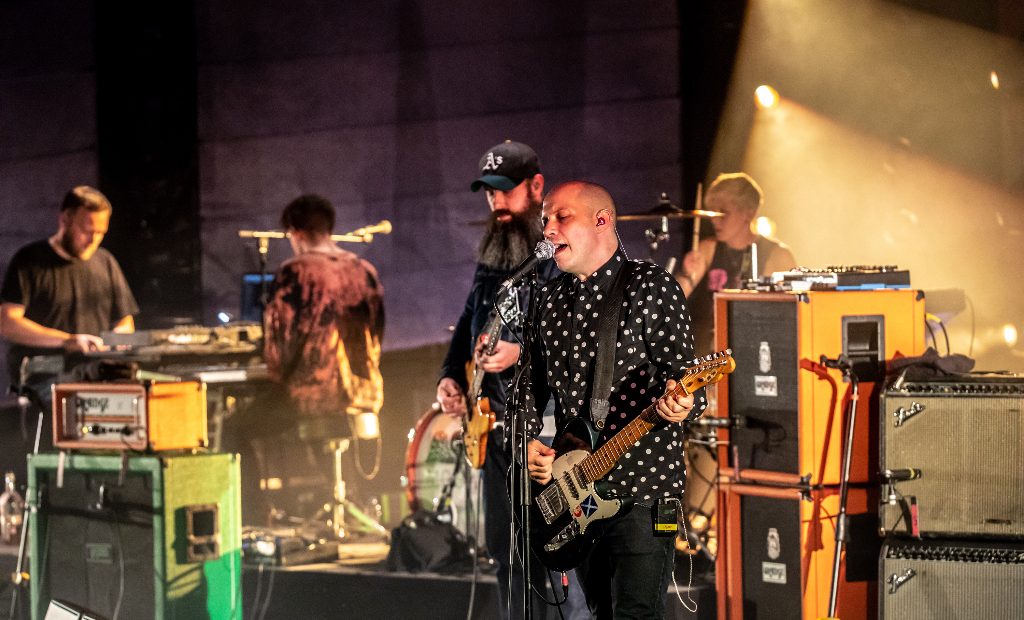 Expansive and experimental, the soundscapes of Glaswegian four-piece Mogwai have carved a pioneering trajectory through the band’s 22-year existence. During this one-off concert for Meltdown Festival, the Royal Festival Hall’s famous acoustics perfectly marry with their instrumentation, so that every layer is intricately showcased.

Opener Every Country’s Sun is a beautiful swelling number, tracing a line from the pensive to the hopeful. As the last song on the 2017 album of the same name, it offers an optimistic round-off to a protest against the turbulence of the current social climate; here it builds a patiently flowering sense of anticipation for the concert ahead.

Cut from the same LP, Party in the Dark introduces itself with Stuart Braithwaite’s breathy vocals, soon joined by Dominic Aitchison’s pacey bass.

Despite some technical issues with Braithwaite’s guitar on Coolverine (a roadie quickly rescues the situation), the track proves itself a highlight of the show, layering masterful guitar over trademark syncopated percussion.

While they’ve graced festivals and stadiums the world over, it’s unusual for Mogwai to perform at an all-seated venue as they do here. Perhaps the energy feels a little lacking because of it, though this format does also give a reverent feel to proceedings. Besides, there is plenty of seat-dancing going on.

A track from the debut 1997 Mogwai Young Team, Mogwai Fear Satan leaves a glow hanging in the air as it rounds off the main set. Its warm bass, heart-gladdening running rhythm and gentle flute melody alongside Martin Bulloch’s tribal drumming serve as a reminder that this ensemble have been getting it right from the start of their career.

Braithwaite takes a moment to praise Robert Smith of The Cure, curator of this year’s Meltdown, for his work and for his band’s support of Mogwai over the years. A four-song encore ends with My Father, My King from their 2001 EP which eerily riffs from a whisper to a shout and back again like a wave. As the final splintering, stuttering notes abruptly die, so culminates a set that is as stunningly undulating as it is meditative. Smith must share in that success too; 2018’s Meltdown is hitting all the right notes.

Watch the video for Coolverine here: