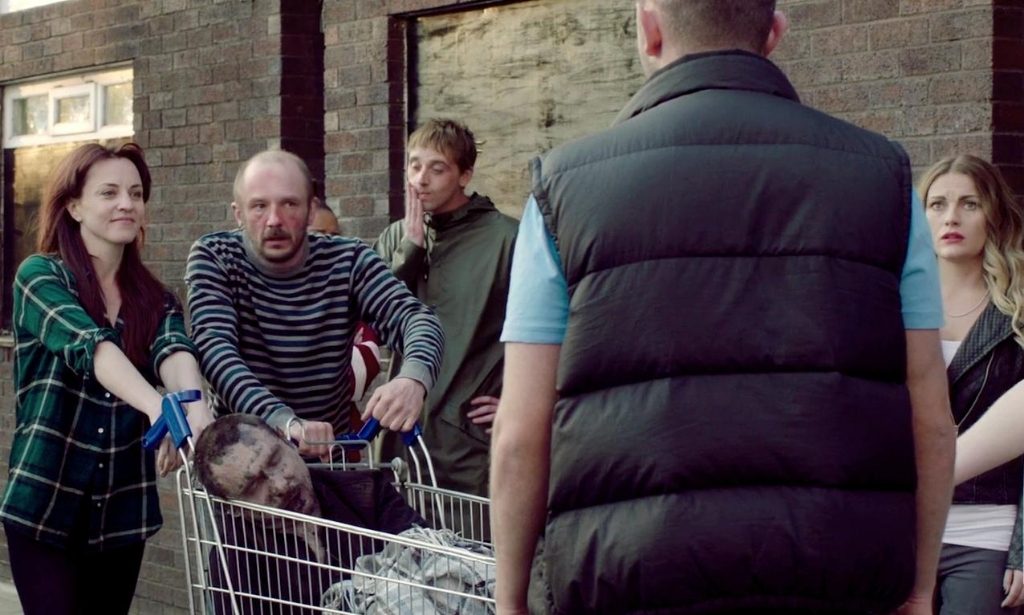 Salford-born director and writer Chris Green takes an apparently lighthearted approach to the task of chronicling a small chapter of the town’s story with Strangeways Here We Come; the film has just enough irreverent humour woven into its script to prevent the audience from looking too closely into the circumstances of its characters’ lives.

Strangeways Here We Come was filmed on-site, and visuals are wonderfully fit for purpose: aerial shots of washed-out concrete over white skies, sickly cloud cover and smoky urban landscapes are interwoven with the action just enough to fix the movie firmly in place, adding an external specificity upon which the fairly trope-dependent characters will come to rely.

The story follows residents of the Pendleton estate as they identify a common enemy in a local loan shark and start to think about eliminating the threat he poses. Opening with a succession of short, sharp scenes, letting the viewer drop in and out of people’s lives at just the right time to catch a punch line, the film nevertheless captures a moment or two of a recognisably authentic relationship – though this may well be attributed to the talent of the well-acclaimed cast members, who all do well to find space to impress within character roles that can strike as reductive.

At times, the approaching jokes are transparent in their set-up, which does not dull their impact but detaches the onscreen action somewhat from the plot that is doing its best to run alongside it. Added to regular moments of almost self-conscious performance from the actors, this can give the impression of parody, steering the feature away from any possibility of real insight into the lives of its heroes and heroines. Nonetheless, Strangeways Here We Come does manage, at times, to represent the less charming aspects of life at Pendleton – some of the punch lines inspire as much alarm as they do laughter, and the gratuitously violent, exploitative behaviour of self-appointed debt-collector Mr Nolan can ring a little too true.

Similarly, although the movie relies heavily on well-honed stereotypes in its characterisation to keep the plot moving, these characters are at their best when sharing the focus of the camera, and the patience, respect and reservation of judgement displayed by the Pendleton residents at painful moments contribute to a convincing sense of community of which Salford – or any town – could be proud.

Strangeways Here We Come is released nationwide on 5th October 2018.

Watch the trailer for Strangeways Here We Come here: