Othellomacbeth at the Lyric Hammersmith 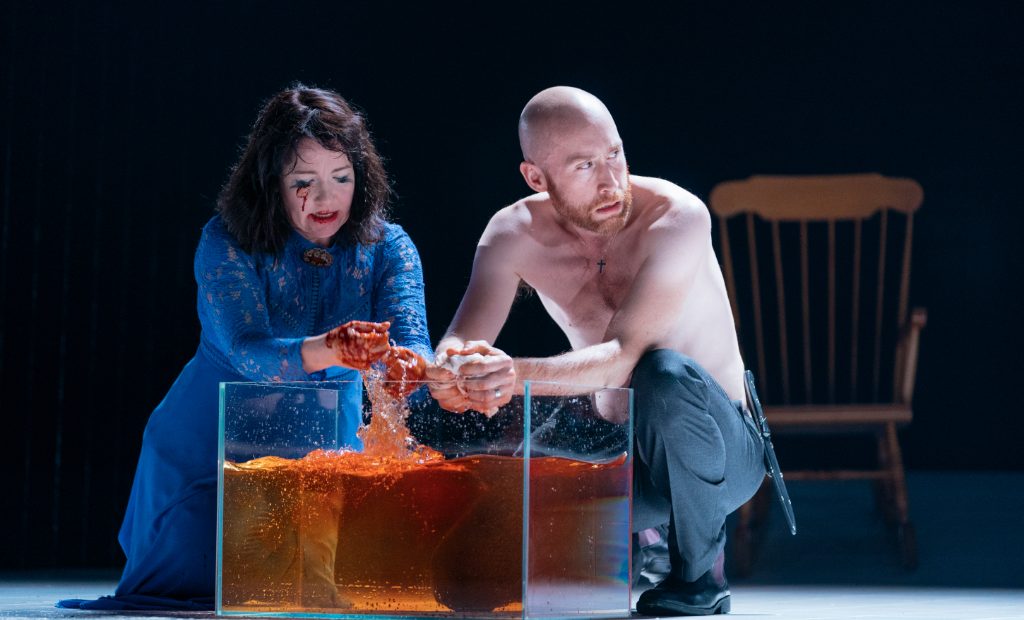 Beginning with Othello – a very condensed version of the tragedy – the piece is a feminist study of the oppression and abuse of women. Rather than focusing on Othello himself, the spotlight is on the female characters. That the latter become the vengeful witches in Macbeth in the second half provides an innovative twist to this remake. An eye for an eye is the nature of their war on men, and their aggression and spite are equal in vehemence to what they endured. It thus might become questionable to the viewer whether brutality is ever acceptable.

Christian’s attempt to portray the important topic of domestic violence is worthy of respect, as is her admirably unique and innovative effort to merge this duo of very intense male-centred, much lauded iconic works and create something new. However, the result is slightly confusing. Regardless, it is such a brilliant idea and clearly quite a feat, that any choppiness can be forgiven in light of the play’s ingenuity, intensity and its significance in terms of subject matter. Perhaps it is more like a visual artwork – quirky, indefinable, but interesting and thought-provoking.

Despite occasional incongruity, the writing is stunning, with excellent transitions between scenes, especially considering the extensive editing and reworking involved. Performances are outstanding, particularly Samuel Collings’s portrayals of both Iago and Macduff. Sandy Grierson is impressive as Cassio and Macbeth; Ery Nzaramba plays Othello with subtlety and subdued vigour; Kirsten Foster’s Desdemona is superb and powerful; Melissa Johns is a mesmerising Emilia; and Caroline Faber is flawless as Lady Macbeth.

With minimalist steel and metal, the set (Basia Bińkowska) is inventive and evocative. Except for one scene in full armour, costumes are contemporary throughout, no doubt to emphasise the present-day relevance of gender issues. Lighting is stark, accentuating a sense of oppression.

Othellomacbeth is a brave, compelling rendition of Shakespeare and another example of theatre’s part in bringing vital issues to the fore. Fascinating for fans of the Bard, the piece is also powerful, intriguing, enlightening viewing for all who appreciate cutting-edge drama.

Othellomacbeth is at the Lyric Hammersmith from 5th October until 3rd November 2018. For further information or to book visit the theatre’s website here.