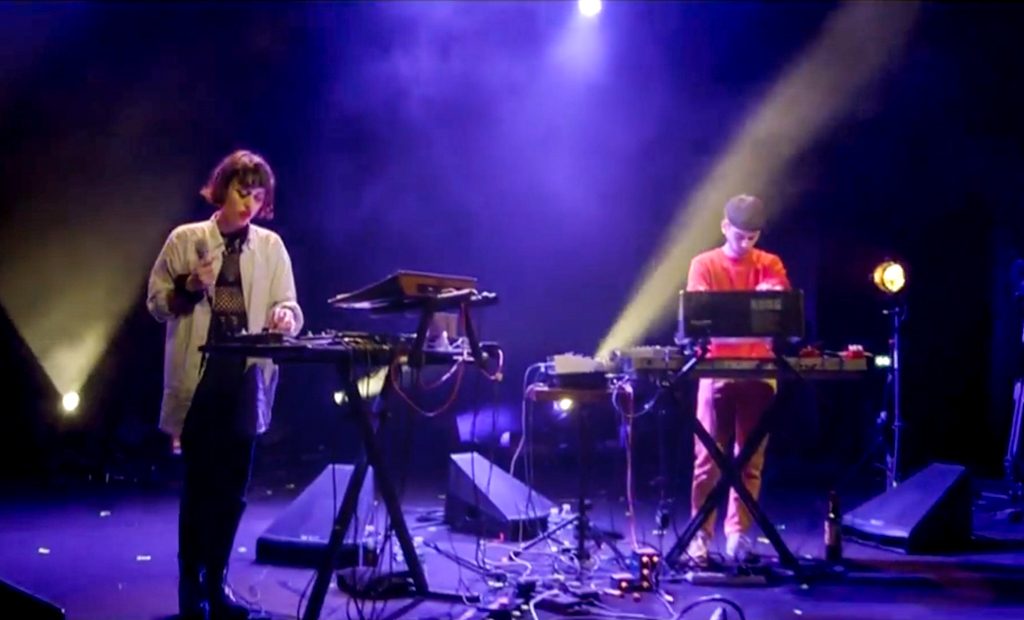 Pretiest Virgin, Sorry About the Carpet, Fangs Out

Electronic-pop duo Agar Agar have already been making waves in the French music scene for some years now, ever since their first EP Cardan hit shelves in 2016.

Now the pair, who met at Beaux Arts school of Cergy-Pontoise, have just launched debut album The Dog and the Future (28th September) – and with last night’s sold-out gig at London’s Village Underground, have demonstrated their ability to foster a following beyond their native France.

Having seen them play at Berlin’s Pop-Kultur festival this summer in a setting with a similar vibe but on a much smaller scale, this bigger stage seemed to have the effect of fully unleashing their live performance, strobe lighting casting silhouettes of the duo, and Cappagli’s tongue-in-cheek onstage antics – complete with a convincing wolf impression – given their proper platform. Their “Securité” officer also reprised his role as an unexpected shirtless backing dancer.

Playing highlights from Cardan such as Prettiest Virgin with its addictive refrain – “Come on dance with me, come on dance with me/Give me a wink if you want me to faint” – plus new album tracks such as the brilliantly surreal Sorry About the Carpet and deliciously dark Fangs Out, Agar Agar gave London the full display of their experimental sound which draws influences from across punk and instrumental electronica, from pop to techno.

Building up to a crescendo from their more poppy songs to heavier club-worthy tracks, they had the Tuesday night crowd firmly in a weekend, let-loose mood with their infectiously witty, irreverent brand of electro-pop. There’s no doubt that London will be calling them back soon.

Watch the video for Sorry About the Carpet here:

Pretiest Virgin, Sorry About the Carpet, Fangs Out