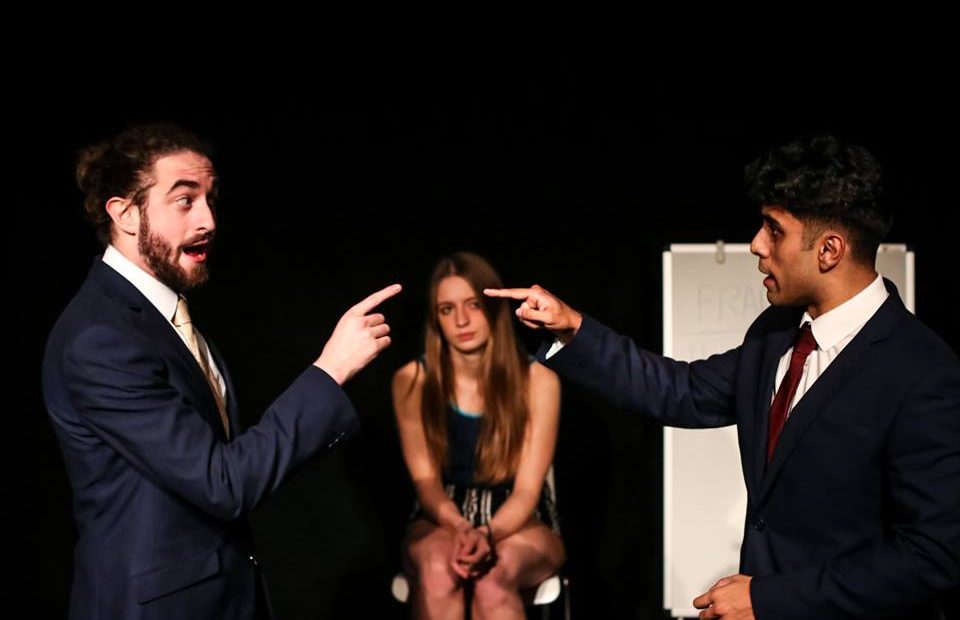 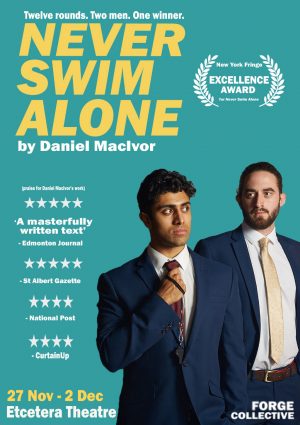 Never Swim Alone, directed by Alexander Hicks, is, at heart, a satirical exploration of the meaning of masculinity presented through the framing of a boxing match. Each round has a specific topic that works to pit the two men, Bill (Azan Ahmed) and Frank (Jack Dillion), against each other, covering the frivolous to the serious. The two performers work wonderfully off each other; their attempt at defining themselves as unique failing due to their similar dress and demeanour. The moments of talking over one another and together are executed with precision, wrapping up this idea of them being co-dependent on each other for the competition. The audience is kept engaged as the monologues are mainly focused towards them, utilising the intimate nature of the performance setting.

We are invited to judge the battle playing out in front of us, witnessing the tension flow back and forth between the characters on stage. It would be criminal to only focus on those talking to the audience as one would miss key moments of the breakdown in bravado that represents masculinity. Each round gives spectators a peek into each man’s life and whether they have “achieved” happiness through the perfect wife, house or financial stability. The ending is thought-provoking, each character building the tension to a faultless level; this means that the laughs that fill the theatre at the beginning of the piece have been replaced with feelings of unease and worry.

While talking about the men of the show one must not forget the performance of Tabatha Gregg-Allured who balances the dichotomy as the referee and as Lisa with precision, showing the sweet innocent girl who has become hardened. While she might be viewed as the prize for the two men to fight over it becomes apparent throughout Never Swim Alone that she is the one calling the shots, playing with both Bill and Frank’s desire to outwit, outsmart and outperform each other. The title “referee” emphasises this even more: she is the one in control, the other two are simply players.

The props are defined while the set is not, this working to emphasise the surrealist nature of the dialogue. The show relies on engagement from the audience to work, which is ensured due to the incredible performances. The question asked in this piece is “what does it mean to be a man” and is only answered in a childish and alarming competition that emphasises the redundancy of this very idea, undermining the traditional expectations of masculinity.

Never Swim Alone is at Etcetera Theatre from 27th November until 2nd December 2018. For further information or to book visit the theatre’s website here.