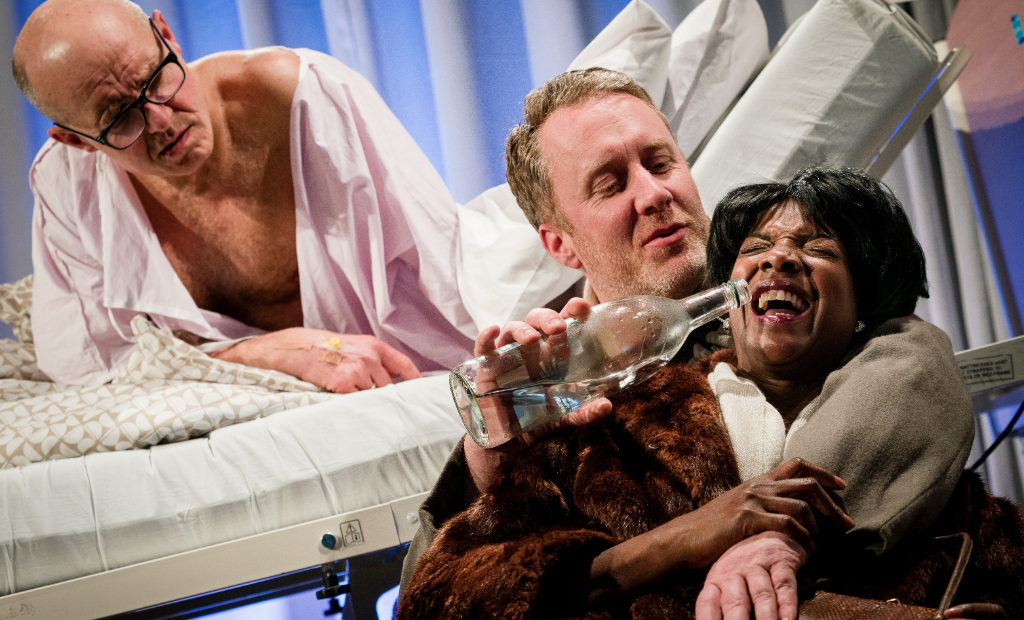 “Gaining access to the big issues through the back-window of “unremarkable” lives.”

Pipeline Theatre have six plays to their name, and each one is exquisite. Humanity and fragility are explored by way of deeply personal, specific relationships, and always delivered with high production values. Right now they’re touring their new show across the UK; Drip Drip Drip is about “love, death, racism and hobnobs, in the NHS”. I spoke with director and writer Jon Welch and designers Jude Munden and Alan Munden about the trials and triumphs of making theatre. 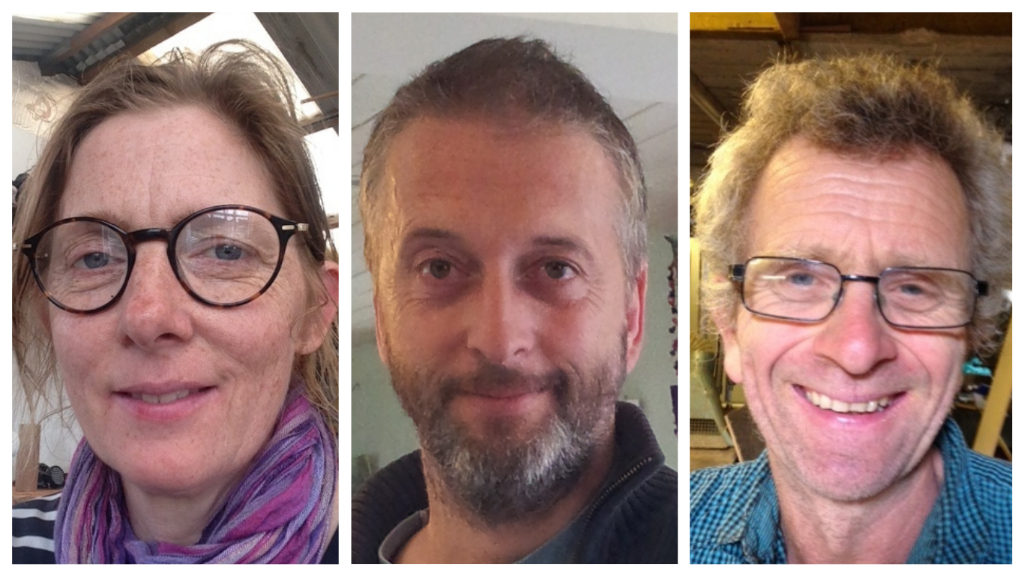 What ethos and interests exist at the heart of Pipeline Theatre’s work?

Sorry if this sounds pretentious, but for me (Jon), the plays are sort of like a laboratory for examining the possibilities of empathy within fairly straight storytelling (usually! – Drip Drip Drip is actually our least “straight” play). Kindness in unlikely circumstances or revealed in unlikely ways is for me the most moving of human tendencies.

And we’re interested in looking at what’s informing the various “national conversations” at the time of writing, because we want to be relevant. The risk is that addressing those kinds of issues head on can seem po-faced, and “weighty”, and we’re really into making audiences laugh and jump, and be entertained, as well as care and think. And, personally, I’m big on subtext and nuance, and gaining access to the big issues through the back-window of “unremarkable” lives. Which then of course turn out to be remarkable. Again, Drip Drip Drip slightly breaks this mould, but not entirely.

I’ve often left a Pipeline Theatre play moved to tears. Do you remember any extreme responses you’ve had from audiences?

We’ve had quite a lot of tears, and quite often people talk about not being able to shake off their concern for the characters, days after having seen the shows. Which is really gratifying, and what we’re all about. Often people register their surprise at how much they laughed. We’ve made a few people angry with our latest show, but I think that’s the nature of the main character.

Set design is an integral part of your work. When conceiving a new play, how soon is the design element brought in?

Very soon! Generally, after a big “what’s it going to be about?” and “who can be in it?” brainstorm, I’ll either write a rough treatment, or a few early scenes as they occur to me (or both), and then we’ll share that to see how the design can make sense of where it appears to be going narratively. And then the design conversation will affect all sorts of things about the further development of the piece. Often my favourite bits of the plays are nothing to do with the writing, but just visual moments where it all seems to coalesce.

Sound plays a large part in your shows. Could you sum up each one of your plays just with one sound or tune?

For Transports (about fostering and the Kindertransport) it’s the song Together by Sandie Shaw; for Streaming (about webcam sex), a reggae version of Somewhere over the Rainbow by Melvin “Mellow” Lawla; for Swivelhead (about an RAF drone pilot) it’s the Lohengrin prelude; for Spillikin (about a robot companion for someone with Alzheimer’s) it would have to be My Funny Valentine (and all of Parallel Lines); and for Drip Drip Drip (about racism in the NHS), the sound of big hospital corridor doors, banging open and shut. And Mural by Lupe Fiasco.

How much does a script typically change from first reading to final performance?

It always gets a bit shorter. There’s generally one major structural rearrangement – the realisation of which totally freaks me out, and solving of which generally keeps me awake for about three nights running. I can never really let the plays go. Which means they’re never finished. I never have that sense that a true artist has, of something being “right”, or “done”. But as time’s gone on I’ve made my peace with that. The play is as a good as it can be, at that time, at that point in its – and my – life, at that stage during a run, on that night, with that audience.

And I quite like the idea that a play, even if it’s over, the noise and chaos of it forgotten, the script tucked away in a cupboard, is still “alive”, as if it’s hibernating.

What is your experience of the Edinburgh Fringe Festival?

Oh. My. God. Well firstly – It’s kind of annoying having to write a one-hour show, and that a longer show won’t sell. And so the world is full of post-fringe small-cast plays that last an hour. Is that contributing to the sense of theatre audiences being short-changed? Who knows. Don’t get me wrong, I’m all for efficiency and brevity, but I think a play has to be as long (or as short) as it has to be. Making all fringe plays a unified length is kind of bonkers. It means that at 55 minutes in you know it’s going to end. Sort of a built-in spoiler.

Beyond that, it’s just hard. And kind of sapping. Selling, marketing, getting audiences, flyering, being lucky with reviews, feeling that it’s a much younger person’s game. And yet, it is of course, amazing. The last two years I’ve gone as a punter, and some of the work I’ve seen has been mind-bogglingly inspiring.

The Angels of Fore Street comprised a cast of non-professionals from Camborne and Redruth. Tell us a bit about that community work.

That was a massive learning curve for us. Massively rewarding, and uplifting, but a proper journey, through managing people’s needs and vulnerabilities, coping with such diversity, and really understanding the severity of circumstances that some of the more marginalised among us live with. We rehearsed through winter, suffered lots of cast illness, required all sorts of ingenuity to help with confidence, and line-learning and coaxing people into being performance ready. And then we took them all on a breakneck five-gig local tour, culminating in a sell-out at a 500-seater in Redruth, where they got a (deserved) standing ovation. And were transformed by the experience.

What are the difficulties faced by taking a production on tour?

It’s the never-ending admin. Because we’re a small outfit, and funding is not easy, we all multi-task. Often it’s unpaid multi-tasking – like posting 10,000 flyers, arranging the accommodation, taking up any marketing slack. One of the hardest things, having secured a single night at a venue that’s not had us before, is trying to market ourselves, an unknown quantity in that area, and get an audience.

In terms of venue feel, the differences are huge. Just in practical terms we’re having to re-work sections of Drip Drip Drip as we go, because of differing stage dimensions in each venue. But everything plays a part. The atmosphere, the love the managers put into their building, the overall audience demographic, the local area. And you can’t predict it. Sometimes the least likely places provoke the most magical performances.

Are there a lot of ideas that didn’t make the cut and that you might revisit in the future?

Actually not so many. I tend to write to people; I like to know (if possible) the cast that we’d like to work with, as thoughts are starting to emerge, which means an idea and the people inhabiting it will sort of coalesce at the same time. I rarely have an idea in isolation; we do our conceiving together! Alan and Jude have as many ideas as me, more actually. Al’s mum was a Kindertransport refugee and then developed Alzheimer’s, so was the muse (in a way) for both Transports and Spillikin.

One thought was to make a play about Donald Crowhurst, the round-the-world yachtsman who cheated, and then drowned himself (a film was made about him, quite recently, unfortunately – plus it’s not a very cheery story). Another was about a young man who ended up hanging onto a rope from a Zeppelin for an improbably long time. I’ve definitely got a school-based play in me. But there are lots of bear traps in there and it’s a well-trodden field. But you never know…

You’ve created so many distinctive characters. Is there one you look back on more fondly than any of the others?

That’s a tough one. It’s easy to be nostalgic, but Transports was our first play as a company, and there’s a character called Lotte who’s a middle-aged ex-Kindertransport refugee, a childless widow, marooned in East Anglia, who suddenly decides to take up fostering. She’s a combination of confusion, miscued good intentions, eccentricity and kindness (all covering over a gigantic and unresolved loss). She’s very easy to be fond of.

Could you tell us about the research that went into creating Drip Drip Drip?

At the very start of the process we held a forum with many local NHS practitioner acquaintances, and three hours later we had to ask them to stop, so much did they have to unpack. They were all clearly suffering – from cuts, from the management culture, from the crazy hours they have to work and the admin slog. And this is tricky, because we didn’t want to write a tub-thumper or takedown of the NHS, but we also felt a need to honour their input.

We spoke to other academic partners, particularly those with a specialised interest in race issues within the NHS, and, unusually for us, we held an R&D week before writing even began, with (along with medical staff/colleagues) a diverse company of actors, all of whom are now, gratifyingly, in the play. The conversations we had about race, the NHS, bigotry, “othering”, and the improvisations that emanated during the R&D were, for middle-aged white people like us, frankly mind-blowing, and – without being melodramatic – life-changing.

If money was absolutely no object, what would your next show be like?

We keep wanting to produce a musical. Full-on, bells and whistles. Of one of our shows we’ve already done: Transports the Musical. Dancing Nazis, there’s skating over a frozen lake, train tracks, actual trains, a chorus of Kindertransport children, a gang of dodgy youths, mostly set in the 70s – what more do you want? Someone? Anyone?

Or Spillikin the Musical, featuring an ensemble of dancing robots (Spillikin had an actual humanoid robot in it), constructed as a Jukebox musical from all the songs on Blondie’s Parallel Lines (some of which we used in the show). We’ve been through it, and they all work. We just need to find Debbie Harry’s phone number. And a million quid.