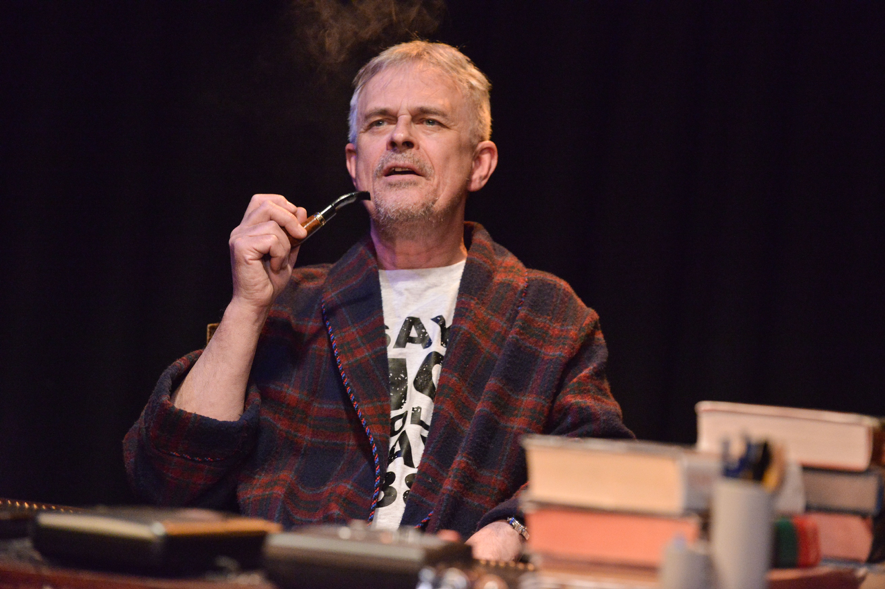 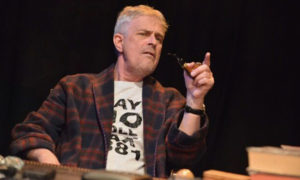 Clapham’s intimate Omnibus Theatre was near to full last night in honour of the late political legend Tony Benn (Philip Bretherton), who passed away in 2014. This diverse venue has a repertoire that ranges from mental health drama to drag, and in many ways Tony’s Last Tape was a return to dramatic safety and tradition in this local, townie theatre.

The audience reflected this – mostly over 60, mostly white – but nonetheless enjoying conversation and shared political memory over a glass of wine, revelling in the inviting atmosphere Omnibus immediately creates. Just the kind of “champagne socialism” Benn might have despised, or occasionally indulged in. Who knows?

Bearing a title more than referential to Samuel Beckett’s one-man monologue, Krapp’s Last Tape, the production’s minimalistic set gave the audience a glimpse into Benn’s study. Like Beckett’s play, the show was similarly filled with recording equipment and lit by a single ceiling lamp from above, with the door at the back of the stage leading out to a “kitchen”, which was used well by director Giles Croft to break up ramblings, musings and subtle jokes. Bretherton complemented this with a solid and sustained performance that only faltered once or twice, and that shone during a particularly funny scene with a children’s voice-altering megaphone.

The underlying theme was predictable, but poignant: an 87-year-old man looking back on a life of hard work and idealism that had not left the impact he had hoped. Inspired by Benn’s own diaries and speeches and threaded together by playwright Andy Barrett’s generally well-balanced script, the play at times strayed into a realm of introspection and in-jokes, which quite literally garnered “you had to be there” laughter from the auditorium. The overarching motifs of ageing, retiring and letting go were, however, nicely interlaced with Benn’s attempt to find the perfect anecdote for a friend’s funeral, solemnly foreshadowing his own just one year hence.

Tony’s Last Tape is best seen with some prior research to its context, and does veer into niche references that prevent a more universal depiction of old age, nostalgia and regret. This wasn’t really the point, though – what the audience gets is a rounded picture of one influential man. Now in South London until 20th April after two sold-out runs at the Nottingham Playhouse, Tony’s Last Tape is definitely worth a watch for those interested in politics or who want to learn more about the man – widowed, human, often wrong – behind the divisive then treasured myth of Tony Benn.

Tony’s Last Tape is at Omnibus Theatre from 2nd until 20th April 2019. For further information or to book visit the theatre’s website here.