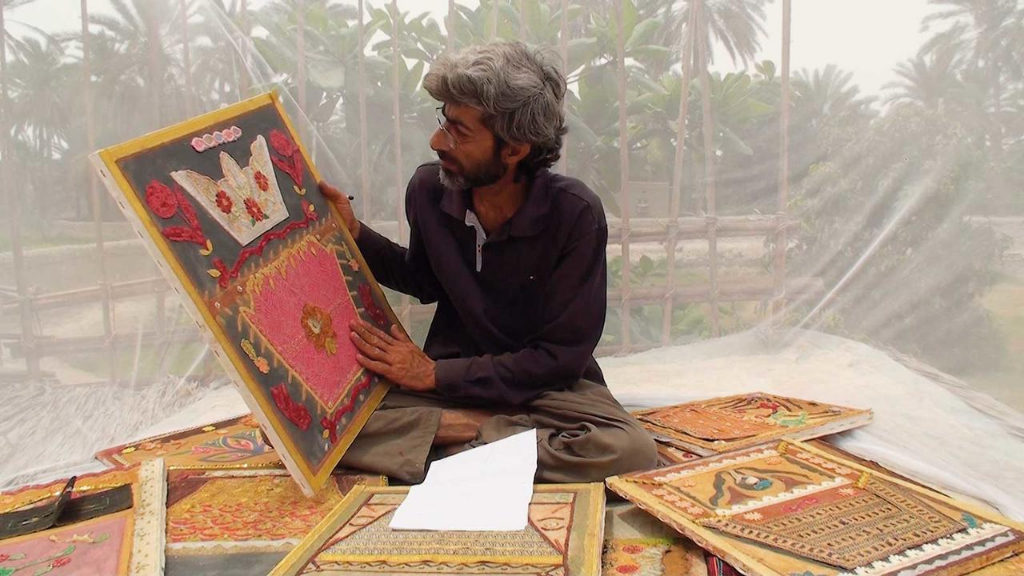 Set around the sandy deserts of Hormuz, Southern Iran, Janbal combines rich storytelling, video art, performance and ethnography to present a bold and experimental exploration of Persian folk and mythological tales. Written and directed by Mina Bozorgmehr and Hadi Kamali Moghadam, the documentary fiction is arresting in its visuals and mystifying with its observations. As the filmmakers commented in the supplementary zine from the season, “the making of Janbal was an attempt to enact this process of trying to make sense of the island through storytelling, mythology and fiction”.

According to Hormuz’s history, islanders have sent the clothes of their deceased to the Sea Mother, in the belief that the recently passed would have their souls cleansed and in an effort to keep their memories alive. The scene in which a blue and gold piece of clothing floats in the shallow waters of the beach brings to mind mermaids, a suitable choice for the Poetry in Motion season, the following capturing the feature’s lyrical essence: “The sound of sequins is repeated in the sea waves, it comes out of the white bubbles little by little.” The locals strongly believe in fairies and supernatural beings, processions showing them singing and dancing in celebration, Bozorgmehr and Moghadam capturing the legendary intrigue with a perceptive eye.

Musa Kamali Chahoui is an artist, poet and musician, and the central figure in the film, playing a clay baked pot known as a jahleh, and writing beautiful Persian poetry. The instrumentalist takes fragments of clothes from the sea, and turns them into vibrant tableaux. The latter half of the documentary is sectioned into three parts: ع (Ain), ش (Shin) and ق (Ghaf), the three letters together making up the Farsi word for love, عشق. As the mythical “sea-daughter” desires her pachak – leg-covers worn by native women – so begins Musa’s mystical journey into magical realism.

The jettisoned clothes float and sway with the waves, producing original and striking symbolic imagery. Audiences get a glimpse of a rarely seen side of Iran, cracked desert landscapes and blue teal seas, surrounded by golden caves. As a piece of cinema, it is confident and refreshing, while the ritualistic nature of the film’s metaphorical content exploring the islanders’ beliefs, makes for an esoteric piece of visual art.

Janbal is screening as part of Poetry in Motion at the Barbican on 17th April 2019. For further information or to book tickets visit the event’s website here.

Watch the trailer for Janbal here:

Dragged Across Concrete | Movie review
“There are wonderful pockets of compassion and resilience in this country coming from ordinary people”: Playwright Grace Chapman on Don’t Look Away and the importance of helping those seeking asylum