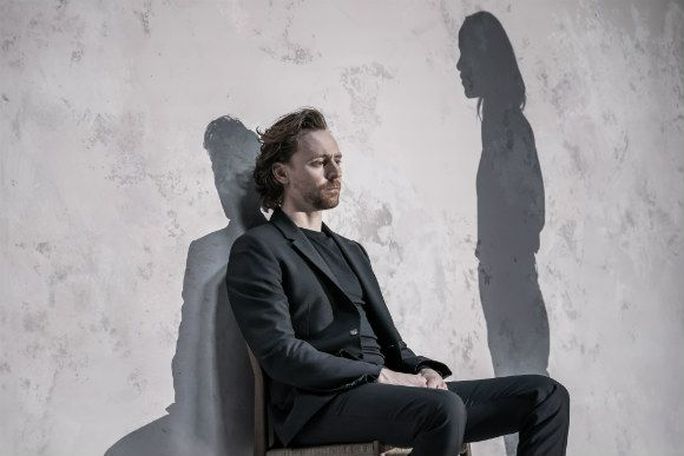 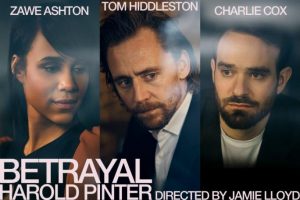 The eyes and silence speak louder than words. And the latest production of Betrayal, directed by Jamie Lloyd, majestically embodies this. The clean set design and the occasional music – an evocative rendition of Enjoy the Silence – boost the remarkable performances of the trio on stage. Pinter’s tense play, at times tinted with absurdity as well as comedy, closes the Harold Pinter Theatre’s year-long season dedicated to the playwright with an exquisite act.

Emma (Zawe Ashton) is married to Robert (Tom Hiddleston), but she has a long-standing affair with her husband’s best friend, Jerry (Charlie Cox). Going in reverse order, the story begins when Emma and Robert are ready to file for separation, moving through the highs and lows of the woman’s extramarital relationship, and backwards again, until the very beginning of Jerry’s infatuation with Emma.

The apparently simple plot opens the world of suppressed emotions and unsuspected unlimited nuances of betrayal that a triangle such as this can cause. Next to the thin dialogues, the solid silence and the unsaid, accompanied by very calibrated movements, make the conspicuous substance of the play. That is why high praise is due to the cast members who tuned in with this feeble body of the script, apt to crack at any given moment, instead fully embracing all the heaviness and the emotional strain it entails.

Touching the humorous chords of the situation, the unexpectedly frequent laughs and ridiculous repetitions refresh the drama.

It is hard to imagine the subtle web of lies and games between the parts couldn’t spark any burst of anger. Tom Hiddleston is a superb personification of controlled temper, while the blood in the veins is pumping fiercely: Robert is really concerned – at least at the beginning – about the shambles of his marriage life. Everything crumbles, but smoothly. First the wife’s confession, then the confrontation with the friend: apparently without friction, if not for the slight change of tone and small ticks Hiddleston assumes. It is a boiling fury, hidden, masked by his disregard, and finally appeased in a civil way. It’s a first-rate performance: powerful and wonderfully measured, with its spins of needed humour.

Charlie Cox is the other pivotal player. From tender lover to frightened friend, his Jerry is a polyhedral character, seemingly the weakest, though maybe the only victim of all the plots.

The rotating stage is the only simple device added to the empty and grey design. In their slow turns, the two circles which make the base align the different time parallels the story is set on. There is always one of the three characters who doesn’t interact with the others. And while at the beginning they each stand as ghostly presences in the background, thanks to the platform they later gradually converge through the various episodes.

Besides a good laugh, Betrayal leaves with a strange feeling of sadness, if not for the unhappy lives of the protagonist, then for the perception of impending destiny and mistrust that dominates everything. It is outstanding how this sheer production renders it all. The drama is the real protagonist.

Betrayal is at Harold Pinter Theatre from 4th March until 8th June 2019. Book your tickets here.

“There are wonderful pockets of compassion and resilience in this country coming from ordinary people”: Playwright Grace Chapman on Don’t Look Away and the importance of helping those seeking asylum
How Am I looking Now? at Theatro Technis | Theatre review