“If Shakespeare were alive today he’d be writing Game of Thrones or Friends”: An interview with Twelfth Night director Adam Nichols 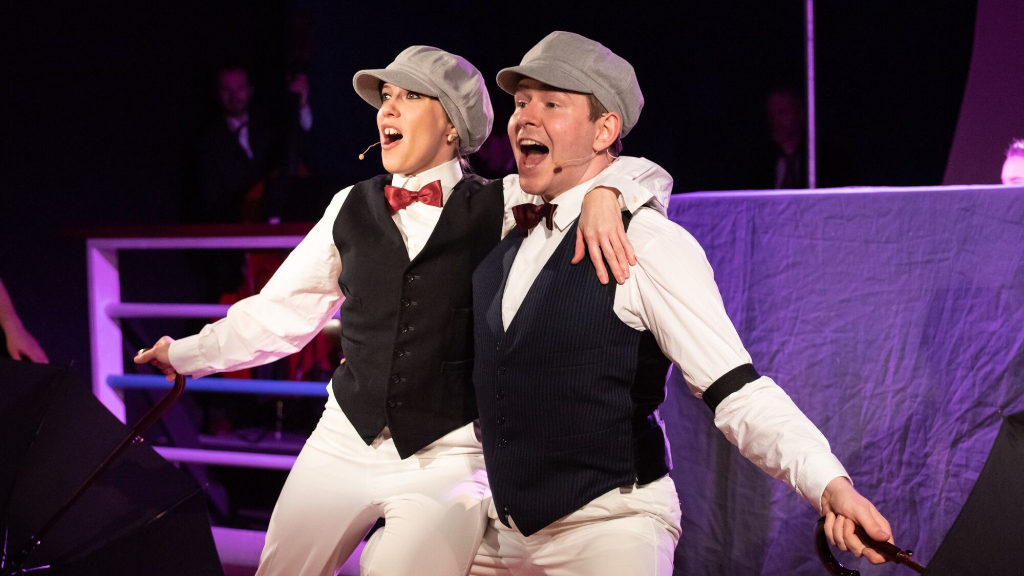 “If Shakespeare were alive today he’d be writing Game of Thrones or Friends”: An interview with Twelfth Night director Adam Nichols

Ahead of his 18th turn as a director for the theatre company he co-founded, actor and director Adam Nichols spoke to The Upcoming on his newest play: a unique, musical take on Shakespeare’s Twelfth Night. The audience can expect a night of innovative theatre, inspired creativity, and above all else, an evening of supreme entertainment, courtesy of the OVO team.

Hey Adam! Firstly, what made you opt for a musical version of Twelfth Night?

Twelfth Night is possibly the most musical of all Shakespeare’s plays. Although As You Like It contains one more song (7 in total), Twelfth Night feels more musical in its bones, beginning (of course) with one of the most famous lines in stage history – “If music be the food of love, play on!”. So however you choose to stage the play, music will always be an essential part of bringing it to an audience. OVO is a company of actor musicians and our reputation has been built on using music to make Shakespeare accessible.

What about this project appealed most to you?

First and foremost, a great love of the play. Given that it’s classed as a comedy – and it is genuinely funny – it has an amazingly dark underbelly, which I think gives it incredible pathos. Secondly, an opportunity to revisit a piece that I’ve directed before (11 years ago), which I haven’t done too many times. There’s always more to discover in any Shakespeare play, and I love the moments of surprise in the rehearsal process when you suddenly hear a reference or connection that hasn’t revealed itself before.

What can the audience expect from your Twelfth Night? What sets it apart from other Shakespeare productions?

In addition to the distinctive music, we’ve set the play on a cruise liner, rather than an island. We’ve also played with the gender of several characters – Sir Toby Belch becomes Lady Toby, Malvolio is Malvolia and Feste is a girl rather than a boy. Our talented troupe of actor-musicians have the ability to belt out a tune just as well as delivering a soliloquy with poise and beauty.

This will be your 18th directorial role for OVO, which one stands out to you as a favourite/especially memorable one?

I think I would have to pick As You Like It in 2016, which was our first visit to the amazing Minack Open Air Theatre in Cornwall, where we also picked up the award for best production of the season. A magical experience, and a beautiful show to be part of.

Going back to Twelfth Night, why have you set this particular production in the roaring 20s?

For OVO it’s never enough to impose a theme on a Shakespeare play for purely aesthetic reasons. Setting has to emerge from the characters, their situations and the words they speak. In the case of Twelfth Night, a number of the play’s main themes suggested the 1920s. In the Elizabethan period, “Twelfth Night” was the climax of the festive season. It was celebrated with music, elaborate fancy-dress masked balls, misrule and general revelry. The roaring twenties were also a time of jubilation and hedonism. For the “Bright Young Things” from the aristocracy and wealthier classes, life had never been better. Our use of jazz music in this production reflects the hedonism and wild abandon of many of the characters in the play. Another key theme of the piece is gender and sexuality. It’s incredibly radical for its time, suggesting that gender is something you can influence, based on how you act, rather than something that you are. The 1920s arguably saw as much of a sexual revolution as the 60s with flappers, a thriving and prominent gay culture and androgynous women’s fashion. So the play and the period seem to complement one another very well.

In spite of the 20s setting, a jazz band will be performing 21st-century hits from Rihanna and Britney Spears among others; what was the thinking behind this?

Our mission is to make Shakespeare accessible without dumbing it down, and we think that Britney, Rihanna and Radiohead can bring Twelfth Night to life in much the same way that Shakespeare borrowed 16th-century pop songs to appeal to the groundlings. I love the way that Postmodern Jukebox have fused traditional jazz genres with modern songs, and that style feels wholly appropriate for this play.

Well Shakespeare definitely comes first! People tend to forget that Shakespeare was one of the great populists of his day. If he were alive today he’d be writing Game of Thrones or Friends. He did what all great artists do – gave people entertainment and pleasure whilst, at the same time, making a serious point – whether about gender or class in Twelfth Night, or myriad other themes in the rest of his work – love, family, power, you name it. OVO definitely has a mission to entertain, but we also want people to leave our performances having been provoked in some way. Shakespeare’s writing is a gift for any director to work with. But hopefully, he’d approve of what we’re doing to make his plays accessible and entertaining.

Are there other Shakespeare plays you’d like to try your hand at directing?

I’ve never directed a history play. I’ve nearly given Richard III a go on several occasions, but it’s one of Shakespeare’s more unwieldy works and I think it’s really hard to realise successfully on stage. Probably every director (and actor) thinks they have a King Lear in them. But even after directing a dozen Shakespeares, I still don’t feel ready to take that one on quite yet.

As founder of the company, how would you sum up the experience of working with OVO?

It’s been an incredible 16-year journey from kitchen table to historic Elizabethan playhouse. I think what I love most is the spirit of collaboration that infuses our work both on and off stage. We’ve created an organic, freewheeling kind of process which requires enormous bravery on behalf of the actors – to start with a blank sheet of paper, to take ownership of the play for themselves and to put up with endless tweaking and changing, even after previews are over and the run has begun. It’s a tireless culture, but I think a happy and contented one.

17 years after establishing yourselves as “insurgents” of theatre, what’s on the horizon for OVO?

We’re in the process of establishing a year-round repertory model at the Maltings Arts Theatre, our home in St Albans. And we want to start transferring more of our work into London. On a personal level, I’m keen to prove that there’s a sustainable model for excellent contemporary theatre that doesn’t rely on public subsidy.

And after Twelfth Night, what comes next for Adam Nichols?

I’ve just realised that I’ve directed three Shakespeare plays in less than a year. So, as much as I love the man and his plays, probably something devised and contemporary. In fact, I have an idea for a new piece which will make use of our much loved Twelfth Night piano, but in a very different context. Watch this space!

Many thanks for your time, Adam.

Twelfth Night is at the Rose Playhouse from 23rd April until 5th May 2019. For further information or to book visit the theatre’s website here.

Stranger Things 3: What can we expect from the new Netflix and Nintendo releases?
“That act of pausing for a moment to simply breathe, it can be really powerful and moving”: Mother-daughter duo Caroline and Laura Wright discuss the benefits of The Breath Control Project