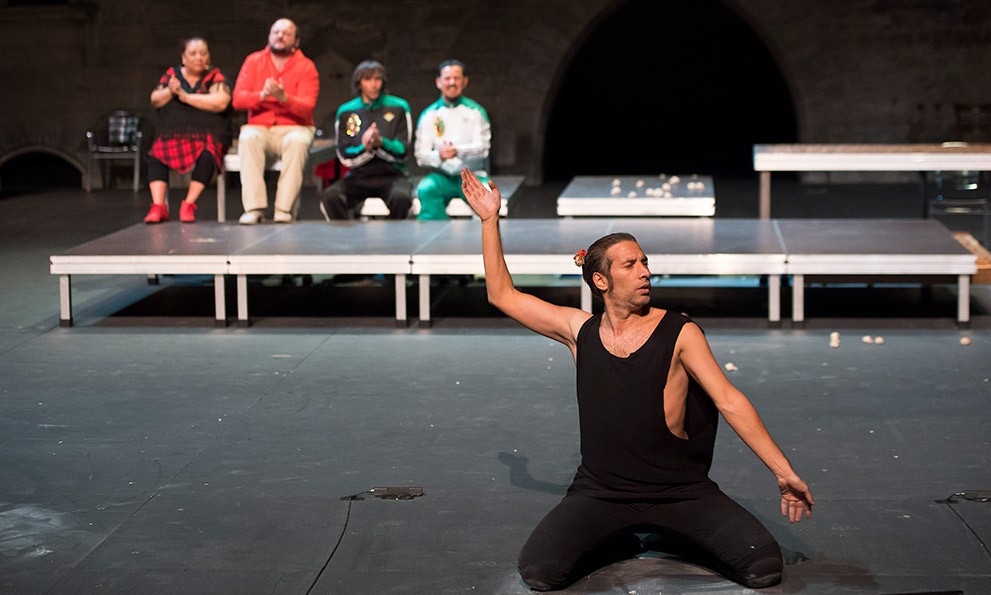 Israel Galván’s La Fiesta invites audience members to the absurd party at the fin de fiesta that is a reminiscence of Galván’s own childhood, the cast playing with their roles and skills in an improvisational style. The show is also a fête of the spontaneous village flamenco tradition, a circus display of boisterous talent in which each artist bounces off the other and elevates and challenges one another, as adults immerse themselves in child-like play.

By letting go of notions of order and convention, the piece produces an organic feeling that has resonances of cíngaro rituals where the dancers laugh at the open doors, inviting life itself to play.

Galván explains that “I wouldn’t be exaggerating if I said that I spent my childhood at fiestas,” which is suggestive of how we view the show, watching through the eyes of a child as the adults climb on tables (which are mounted on springs) that – in a visually spectacular scene – rain coins on the floor. It is the child’s gaze that views adults at the after-party performing in an overexaggerated effort to be sexy, the better dancer, the main singer pushing others off the mic, the one dancing on the tables or across the stage with his trousers around his ankles. Thus, La Fiesta challenges conventions of performativity as well as the gendered nature of the art of flamenco.

It is fitting, then, that the dance of the absurd at its London premiere should witness conflicting sentiments from audience members who do not get it or absolutely love it: a group of three people leave the show midway, while the rest – a full house – offer an extended standing ovation and an overwhelming echo of applause. The nine-member cast joining Israel Galván includes Alia Sellami, Niño de Elche and Uchi, who combine moans, laughter, opera, speech and Arabic singing in an unparalleled vocal performance, one that can only be perfected through the spirit of improvisation that will keep the show feeling new and fresh with each performance.

La Fiesta is at Sadler’s Wells from 27th April until 28th April 2019. For further information or to book visit the theatre’s website here.