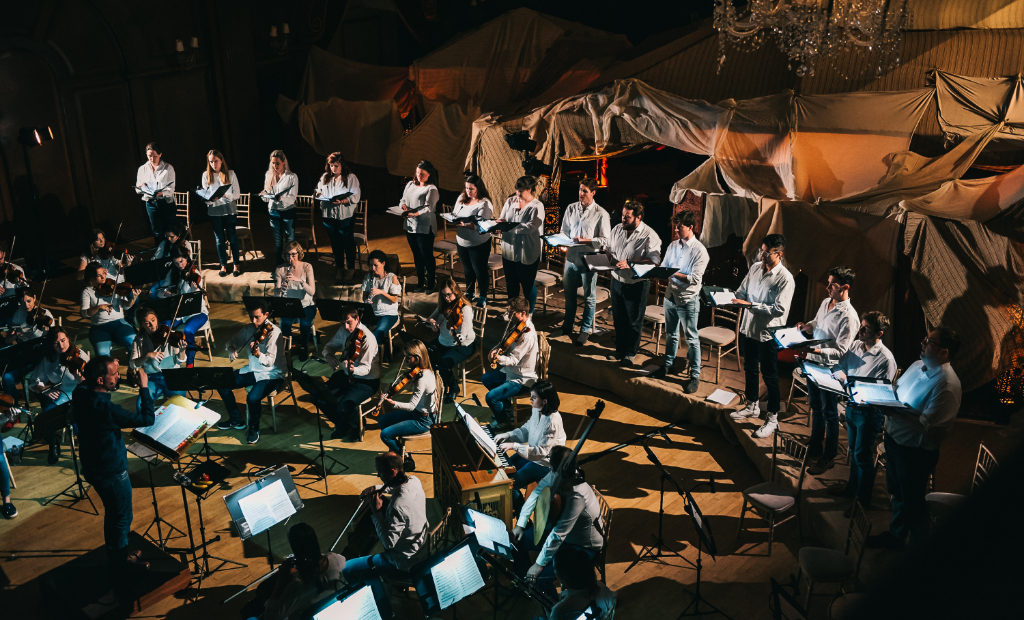 The grand Porchester Hall hosts its final performance of George Frederic Handel’s Messiah Parts II & III by The Little Orchestra. Relaying the stories of Jesus, it’s a scriptural and lengthy performance that requires patience for even the most passionate of enthusiasts.

Elegant traditional Japanese music plays while guests choose from a selection of healthy and palatable culinary options, alongside unique cocktails which add to the luxury of the night – one befittingly titled Nectar of the Gods, complete with blue candyfloss cloud. A large white sheet hovers over the orchestra like a magnificent mountaintop, creating divine imagery, while distinct artefacts allude to biblical motifs; the magnificent spectacle is a feast for the eyes.

Conductor-compère Nicholas Little provides introductions within each act of Messiah, doing a good job in delivering simplified overviews, but there still exists a distance with Handel’s work for newcomers. The oratorio is a 40-strong ensemble of incredible talent, with 19 choir members and a group that includes double bass, cellos, harpsichord, organ and several violins. Part II explores Jesus’s final years, persecution, death and ascension to Heaven, while Part III studies mankind’s future and the Day of Resurrection, with an accompanying timpani and trumpet played from upstairs, producing a celestial feeling.

Little offers context to the life of Jesus, as well as Handel’s formative years in the first half of the 18th Century and the threats posed by the Age of Enlightenment. Religious landowner Charles Jennens creates scriptural text for the composer, with words directly taken from the Bible; Britain is predominantly Protestant during this period, and the words are well-known. Though tonight’s performance is in English, the meanings are lost in their delivery and better received by modern audiences with an accompanying transcript – although they are aided a little by the conductor’s outlines. Despite this, it’s nevertheless a unique experience, but the attempt at creating an event that is relaxed and open to a wider audience misses the mark, as most of tonight’s crowd are classical music aficionados. Little’s passion and joy are clear as he smiles happily while talking us through Jesus’s life, yet there is a sense of being in a university lecture or sermon that combines history and theology, both heavy subjects in any space.

What can be yielded from tonight’s performance is an opportunity to reflect and learn about Handel’s work and Jesus’s life from a Christian perspective. The parts amalgamate and novices can feel a lack of engagement with the music – although the recognisable and timeless Hallelujah Chorus stands out along with Scene I, Christ’s Passion by the solo alto. Overall, the evening can reignite a person’s religious faith while some may find the harmonies an aural delight.

Messiah Parts II & III was at Porchester Hall from 7th until 8th June 2019.