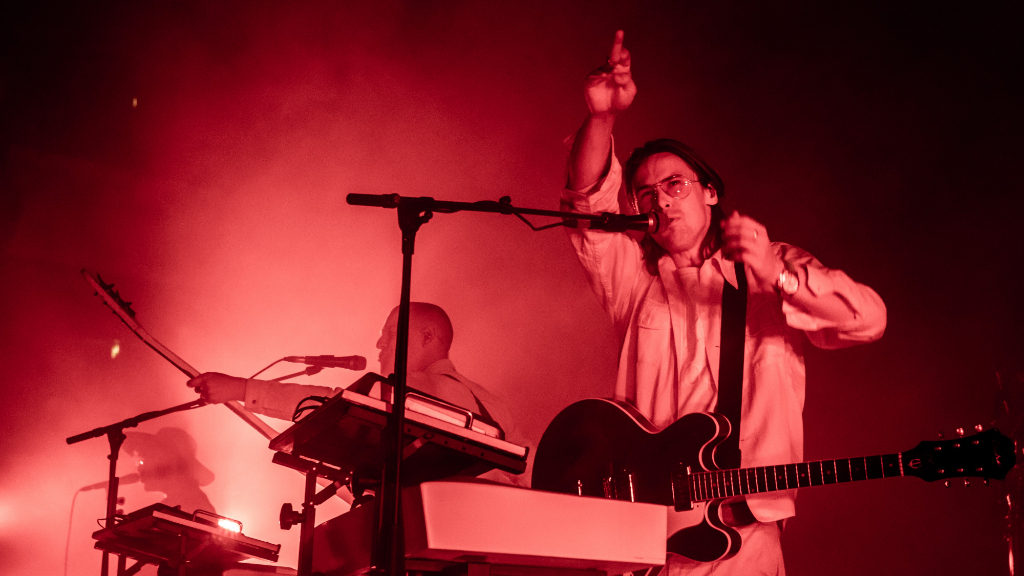 Nile Rogers’ Meltdown at the Southbank Centre started the week with neo-funk, modern soul band Jungle. The London duo Tom McFarland and Josh Lloyd-Watson were joined on the Royal Festival Hall stage by their seven-piece band for a night of boogie, flashing lights and high energy that was maintained from the very beginning. The first song, Smile, from the new album Forever (2018), had everyone on their feet, clapping and singing along. The excitement did not falter as the band went from hit to hit with the much-loved tracks that had many fans grinning ear to ear, including Heavy California which was received with an uproar, The Heat and Julia from their eponymous 2014 debut album.

Moving from keyboard to guitar, the duo ensured a swift, consistent and fluid performance throughout while also engaging with the crowd. McFarland, not holding back on the cheese, shouted out to audience members on the balcony, asking if the queen must be in their midst.

Scissor Sisters’ I Don’t Feel Like Dancin’ meets The Mamas & The Papas’ California Dreamin’ with Jungle’s Happy Man, Platoon and House in LA. The final numbers Busy Earnin’ and Time from the first album made sure that the night ended on the same high with which it had begun and everyone left on light feet, having transported themselves to imaginary places inspired by the band’s own dreams of escapism.

Supporting artists included the beautiful voice of singer-songwriter Rosie Lowe, whose signature blend of soul, R&B and electronic music added to the dream-like atmosphere that set the theme for the night. Swedish producer and multi-instrumentalist Sir Was, who opened the night with tracks from his album Digging a Tunnel (2017), brought an Alternative/Indie sound that complimented the expectations, feelings and rhythms of the night.