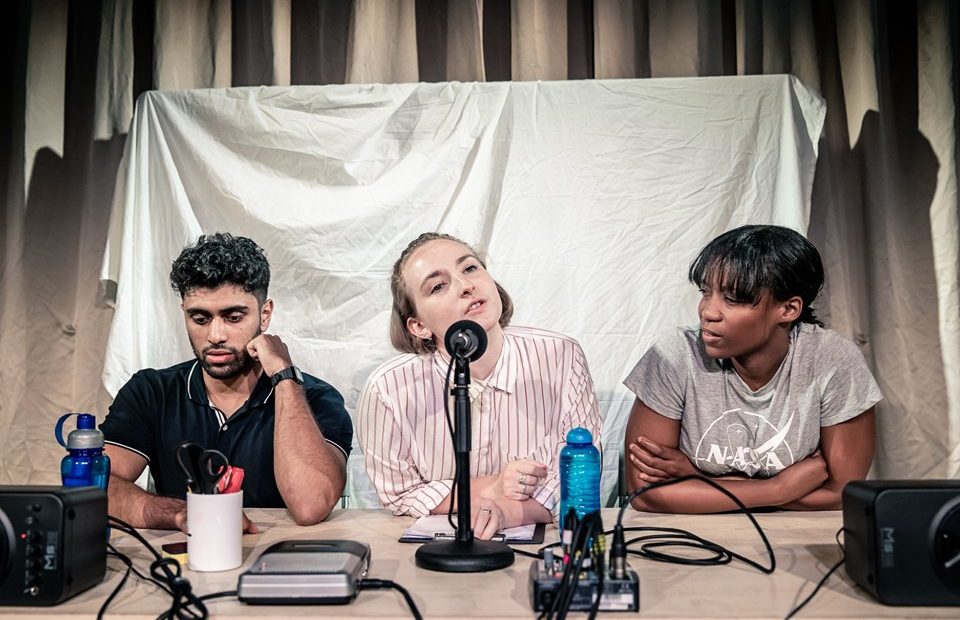 On the 69th floor of a celebrated New York landmark, the Rockefeller Center, 11 reckless ironworkers attend a lunchtime photo-call atop a girder in September of 1932, with their bodies dangling 840 feet in the air, unattached, unaided. Mysteriously, six of these men would be written off the history books, not a trace of them to be seen. Conspiracy theorists Shannon Hayes, Rose Wardlaw and Azan Ahmed would later revisit this peculiar case and try to put their own spin on it, albeit facing several eye-opening pitfalls along the way.

Following a sell-out run at this year’s Edinburgh Fringe, Conspiracy enjoys its near month-long tenure at London’s New Diorama Theatre in this wild whodunit tale that challenges the exploitative nature of modern day journalism. Breaking the fourth wall from the moment audience members enter the auditorium, the cast immerse theatregoers in the action right from the get-go, the three detectives rummaging through endless press clippings, trying to unravel gaps in the photograph’s narrative. The humour stems from the actors’ personas themselves; Ahmed, with his absent-minded antics, confounds and frustrates the stoic Wardlaw, who just wants to cut to the chase and crack the enigma. Then comes Hayes, the playful investigator who craves an adventure, even if it means that her findings deviate from the truth.

With an onion-layered setting, whereby pivotal aspects of the scenography are revealed intermittently, the production keeps that freshness alive; the final frame is a marvel to look at.

Conspiracy explores the notion of fake news, showcasing the easiness with which media outlets can feed falsified and credible information to viewers and listeners alike. Using journalism as a way of bridging the gap between acting and storytelling, the play spells out a vital message, that the more warped and dramatic the narrative, the more likely that account will sell. It paints a haunting picture of a world whose future is void of truth.

Conspiracy is at New Diorama Theatre from 10th September until 5th October 2019. For further information or to book visit the theatre’s website here. 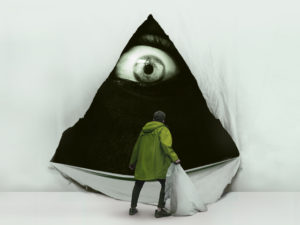