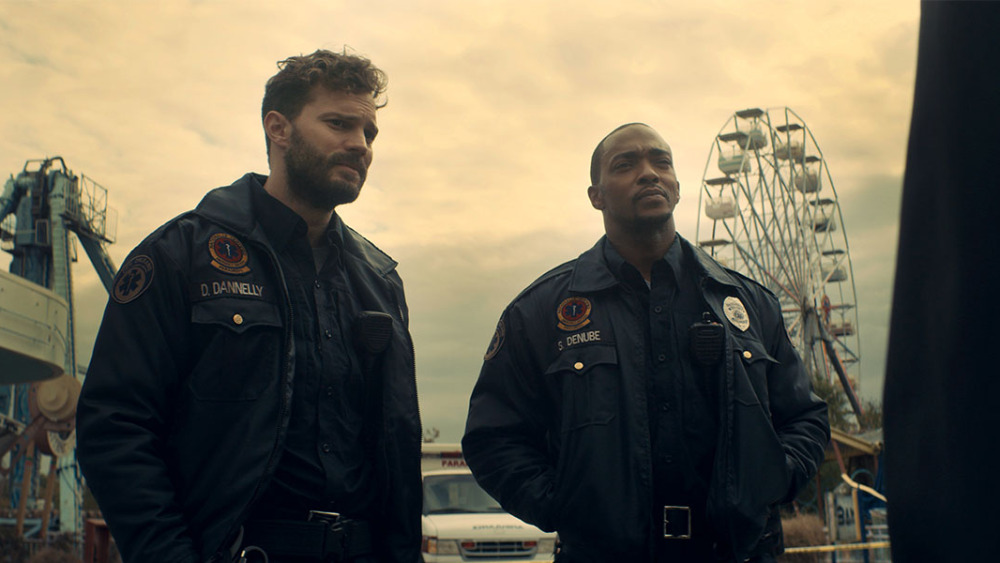 A designer drug has emerged on the New Orleans’ party scene burrowing its way into the minds of its users. It’s called Synchronic (the film and the drug) and its effects run deeper than any psychedelic high. Best friends slash colleagues, Dennis (Jamie Dornan) and Steve (Anthony Mackie) are EMT responders. They drive around town picking up the bodies of the dead and the almost there. Soon enough, a crumb trail of used Synchronic wrappers is the only consistent feature of their emergency stops.

For those of us who weren’t in the know, a designer drug is a molecularly engineered substance fashioned from an illegal drug but rendered legal because of its differing genetic makeup. It’s the exact type of 21st-century horror that depending on which circles you party is the current norm. However, Synchronic, co-directed by Justin Benson and Aaron Moorhead, takes the high one step further. The drug doesn’t induce just any trip but an actual journey to a different time (for precisely seven minutes). It’s all fun and games until a Roman soldier is swinging his 2000-year-old weapon through your torso or you’re stuck in a Civil War trench unable to return to modern-day.

Despite the high concept of a time travel inducing drug, Synchronic manages to veer away from the expected and is easily digestible. An argument could be made for the benefits of two directorial minds at work as they evidence their coworking capabilities with a consistently dense visual patchwork. They incorporate a vast selection of match cuts which function to connect the quotidian objects to our larger galactic stratosphere. Updating the time travel genre, Benson and Moorhead have created a contained self-referential film that remains energetic and endearing. The visual variety ranges from the soft hues of the Louisiana landscape to epic sandstorms creating a non-stop craving and non-stop satisfaction.

Synchronic explains that after ingesting the drug, time is experienced as it really exists. It’s in the more cerebral moments where the story leans on its bromance and existential qualities that Synchronic loses its arresting hold. The stubbornly persistent desire for the film to be an intense philosophical dialogue between the soul and time eventually collapses as a wholesome tale of self-sacrifice.

Synchronic does not have a UK release date yet.