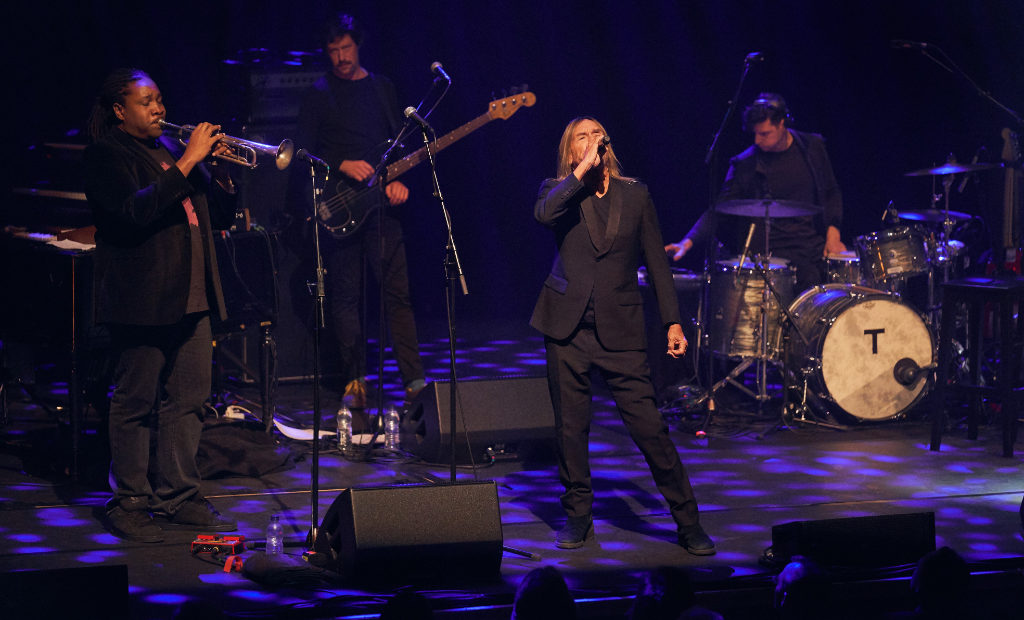 Iggy Pop at the Barbican

As part of the EFG London Jazz festival, Iggy Pop has brought his surprise release Free to the Barbican. Though the artist suggested it was his attempt at a bel canto album and critics lauded its jazz influences, tonight the make-up of the band creates a post-punk, proto-industrial onslaught that mystifies and entrances the crowd.

The whole record is played (bar the spoken word Dylan Thomas poem Do Not Go Gentle into That Good Night), but, despite a sedate yet reverential audience response as the opening seven songs are devoted entirely to that album, Iggy and his band are tight, energetic and impressive from start to finish.

Live highlights from the album are James Bond – its catchy bass line stabbed with punchy guitars, the bassist’s sultry Germanic refrain transforming the track into a sexy post-punk number – and Glow in the Dark, which builds to a deafening, proto-industrial crescendo, complete with frenzied wailing trumpet (the only blatant aural link to the jazz festival which he is performing under).

Indeed, the post-punk feel dominates much of the set. The only nod to the singer’s punk-rock early-days roots is main set closer of The Stooges’ Death Trip which sees the Iggy walk into the stalls and flocks of fans descend from their seats around him (though they are led by the chance to touch their idol rather than out of adulation for the song).

That track does, though, invigorate the performer for the encore, which is a mix of spoken word and experimental deep cuts from albums The Idiot, New Values and Zombie Birdhouse.  He poses and powerfully wails through regular crowd-pleaser Mass Production; he shimmies through the Berlin-era fan favourite Nightclubbing and he tosses the microphone stand during a chugging rock re-imagining of Sleaford Mods’ Chop Chop Chop that the artist rebrands People Places Parties with his own stories from his louche rock past.

By the end, the whole hall is up on its feet to applaud the gracious Iggy as he leaves the stage.  Even though one gets the sense that the audience were really waiting for a well-known hit (The Passenger or Lust for Life), the performance tonight is a reminder that Iggy is not just a mainstream punk-rock cliché, but a unique artist and veritable legend.

Iggy Pop at the Barbican