BBC Culture in Quarantine: The Merchant of Venice at the RSC Online

BBC Culture in Quarantine: The Merchant of Venice at the RSC Online | Theatre review

Joining the BBC’s project Culture in Quarantine, the Royal Shakespeare Company are showing their 2015 production of The Merchant of Venice on iPlayer to tackle the inevitable lust for theatre which has arisen out of lockdown. The production, directed by Polly Findlay, is generally a mixed bag. There’s beautiful music and fine casting choices coupled with an unsuccessful attempt at highlighting the brutal sides of this generally problematic play. The result is a cold, merciless version of The Merchant of Venice which does manage to highlight Shakespeare’s darker side – but at the expense of feeling a bit drab.

Designed by Johannes Schutz, the stage design is minimalistic, with a giant mirror for a backdrop and the rest of the stage left largely empty. The purpose is rather obvious and predictable – letting the audience see themselves as the uncomfortable and urgent matters of racism are highlighted throughout its runtime; it’s been done many times before and is hardly shocking at this point. Similarly uninspired is Anette Guther’s costume design, which seems to be a random selection of contemporary clothing. At least Peter Mumford’s lighting is effective and atmospheric, making the whole stage come to life with colour.

The saving grace comes with Marc Tritschler, who directs a wonderful choir singing beautiful 16th-century music at given intervals. It provides the production with a much-needed spice of life in a quiet, sombre manner and gives the theatre more gravitas as the themes of betrayal, love and racism are explored.

The cast are very well chosen and consistently display strong chemistry. The usually tyrannical – and arguably most recognisable character of the play – Shylock is played by a stoic Makram J Khoury, who interprets the role in a rather unusual but refreshingly passive way, which supports the general feeling of the production. Brian Protheroe is a deliciously energetic and arrogant Aragon. But it is Patsy Ferran who steals the show as Portia with her lively and original take on a demanding role.

This production of The Merchant of Venice does have its strong moments and is certainly entertaining enough, with a capable cast making it worth a watch. But it still has some major issues, being too uninspired and predictable in its interpretation, despite being well-meant.

BBC Culture in Quarantine: The Merchant of Venice is at the RSC Online from 23rd April until 23rd July 2020. For further information or to book visit the theatre’s website here. 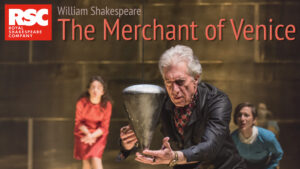 BBC Culture in Quarantine: The Merchant of Venice

“The Edinburgh Fringe is as vital as the world’s greatest pressure valve”: An interview with Anthony Alderson, director of the Pleasance Theatre Trust
An Evening with Natalia Osipova at Sadler’s Wells Digital Stage | Theatre review