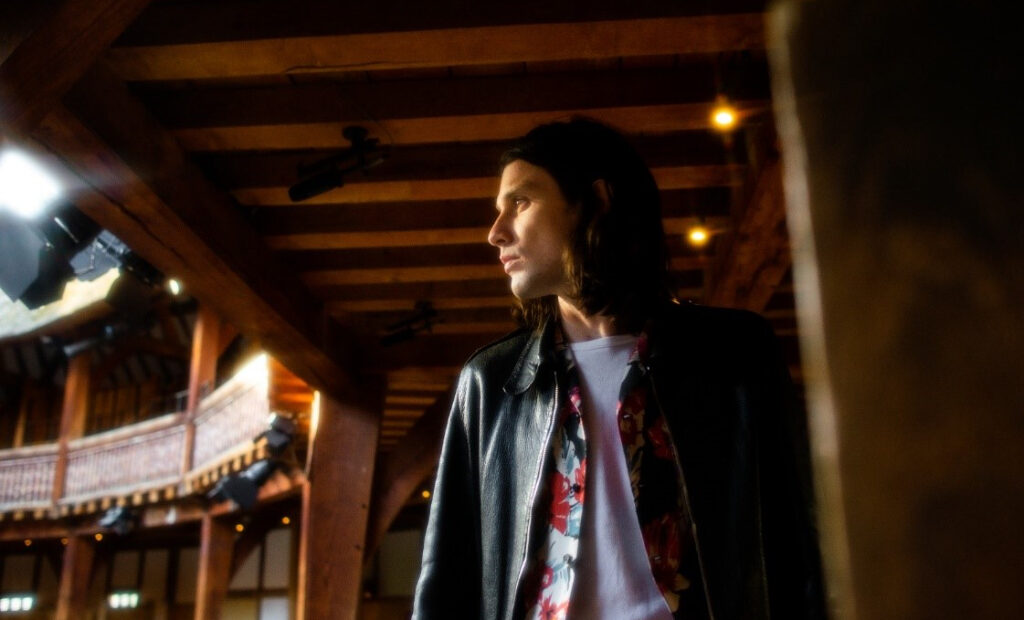 As if gathering virtual viewers in its sweep of an aerial shot of London, a camera leads us to James Bay and his guitar in the cosy tower of Shakespeare’s Globe. No introduction is needed to this exclusive live stream, as soulful vocals are at once propelled from the window to the comfort of homes worldwide.

The final notes of Scars are suspended in the air as Bay transitions to the auditorium, where his band await as if sat around a campfire. Bay’s rustic husky vocal quality and the magical ambiance draw viewers willingly into Peer Pressure. The singer’s skill on guitar creates the illusion that the instrument is almost an extension of himself, as the track blossoms from tender to fiery, supported by an incredibly textured band arrangement. Vibrant and present, especially in Us, the group swell in the space like a beating heart. Woven into one by a circulating camera, they transcend the limits of a compromised performance with magnificent spirit.

Tranquil film technique is favoured over excessive decoration, capturing the attention of the tuned-in audience and creating a powerful intimacy. The mood is fitting with Bay’s laid-back disposition as he chats lightly to a floating camera between songs. Chew on My Heart offers eerie tones, as minor notes echo in the historic arena, and he doesn’t fail to impress with chart-topper, Let It Go.

Bay soon returns to his keyboard in the tower and stills the air with Break My Heart Right and a surprise cover of Life on Mars. Melting into falsetto, he embraces a rawness like the bare bulbs that light his face, before the band reawaken and the leather jacket is whipped back on for the final set of songs.

Electric blue light floods the globe for Pink Lemonade, with synths that seem to ripple through London, and the immense energy of Craving and Best Fake Smile more than compensates for the buzz an in-person audience would have brought. Such dense sound is achieved with Bay’s earthy rasp against angelic backing vocals, creating nuance that surely translates through the screen. Hold Back the River is a familiar send-off, reinvented with colourful dynamic and collective vocals to wrap up the experience in the essence of team spirit.

Were it not for crew members briefly appearing in face masks, one could forget the circumstances that led to this new norm of live music – James Bay and his band rise to the challenge with honesty and passion, and he graces the iconic stage fearlessly. It is, to use Bay’s words, “bizarre but wonderful”; his joy at performing after so long is evident, a smile flickering amid the heartfelt emotion. A truly special performance that instils hope.

Watch the video for the single Us here: