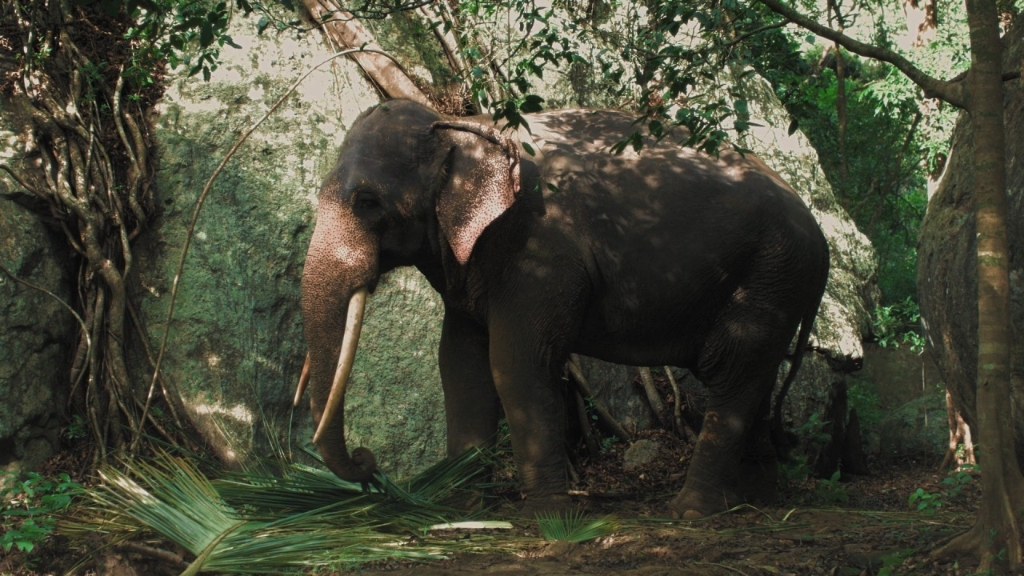 The latest project from Spanish filmmaker and visual artist Carlos Casas, Cemetery is a highly experimental and ambitiously abstract work that pushes the capabilities of avant garde cinema to its sensory limits. Structured in a collection of distinct chapters, each with its own style and focus, the film follows the pilgrimage of Sri Lankan elephant Nga to the fabled elephant graveyard in the heart of the jungle, as the world falls into an apocalypse of biblical proportions.

Despite the grandiose promises of the premise, the project is far more subdued and nuanced in its execution – even to the point of being so impenetrable at times that it becomes impossible to know what’s happening without reading a programme note. This is because, aside from some brief text outlining the general premise, Casas refuses to explain himself to viewers. Instead he uses visual and sonic language to paint vague impressions of space, time and meaning for audiences to interpret for themselves. There’s no way to tell how long Nga and their carer (a mahout) have been traveling, nor can the viewer guess how close the group of poachers are to catching them. These are insignificant details to Casa, as he weaves his impressionistic narrative that’s all but devoid of dialogue.

Image and sound are the primary tools used to create any semblance of meaning – and with jaw-dropping cinematography set to a lush, ambient soundscape carved by David Attenborough collaborator Chris Watson, the effect is frequently mesmerising, as we’re drawn into an unknowable world that’s just as frightening as it is beautiful.

Casas’s ability to paint a sensory world of light and sound is a commendable feat, which he successfully accomplishes. However, his artistry isn’t as effective when watching the film becomes an exercise of endurance. With entire sequences consisting of single establishing shots and countless other painfully drawn-out long shots that overstay their welcome without adding anything substantial to the project, Cemetery feels like a short film that’s been padded and stretched out as much as physically possible.

By no means a conventional film on any level, Cemetery is a conceptually fascinating piece of cinema that’s ultimately foiled by its own artistic ambition. Pretentious and almost impenetrable for most audiences, Casas’s film is a test of patience.

Cemetery is released digitally on demand via Mubi on 18th November 2020.

Watch the trailer for Cemetery here:

Linden Pride on acclaimed bar Dante NYC: “It’s been crazy, we were cooking meals for hospitals and yet managed to open a new location”
Crock of Gold: A Few Rounds with Shane MacGowan | Movie review