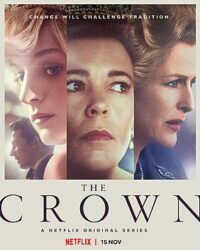 After three gripping seasons, The Crown is back with a fourth, only this time the focus has shifted to the arrival of a new Royal Family member.

It is 1979. The Queen (Olivia Colman) is eager for her son Charles (Josh O’ Connor) to settle down and find a suitable wife. As heir to the throne, the young prince is encouraged to seek an individual who embodies the warmth and kindness of a princess, the kind of person who is capable of capturing the heart of an entire nation. And so the search begins. Following a brief visit to Lady Sarah Spencer’s (Isobel Eadie) lavish dwelling, Elizabeth II’s eldest son has his fate sealed. Diana (Emma Corrin) steps into the picture and the direction of the monarchy is changed for good.

The era marked a crucial turning point in British history, a time known as the Winter of Discontent, where unemployment soared, union strikes ensued – and the general mood amid Brits was that of glumness – until Margaret Thatcher (Gillian Anderson) came into power and gave the country a conservative makeover.

Anderson is mesmerising as the prime minister. Every aspect of her being, from the way she walks to the way that she talks, is a replica of the vilified political figure. Corrin is exceptional as Diana. Not only does she resemble the late, great princess to a tee, but she  also perfectly captures her character’s shyness and later anguish at being trapped in a loveless marriage involving a ménage à trois situation that’s riveting to watch. Both the former and the latter are given sizeable screen time to explore their personal battles, battles which had undoubtedly been swept under the rug and kept away from the public eye until now.

Fans of the show will have plenty to digest, such as Princess Anne’s (Erin Doherty) relationship breakdown as well as other storylines involving Princess Margaret (Helena Bonham Carter) discovering a tragic family secret. The Crown’s fourth season shows a real human side to Britain’s most famous household and evokes an “all is not as rosy as it seems” element, because, after all, no one is perfect.

The Crown is released on Netflix on 15th November 2020.

Watch the trailer for The Crown here