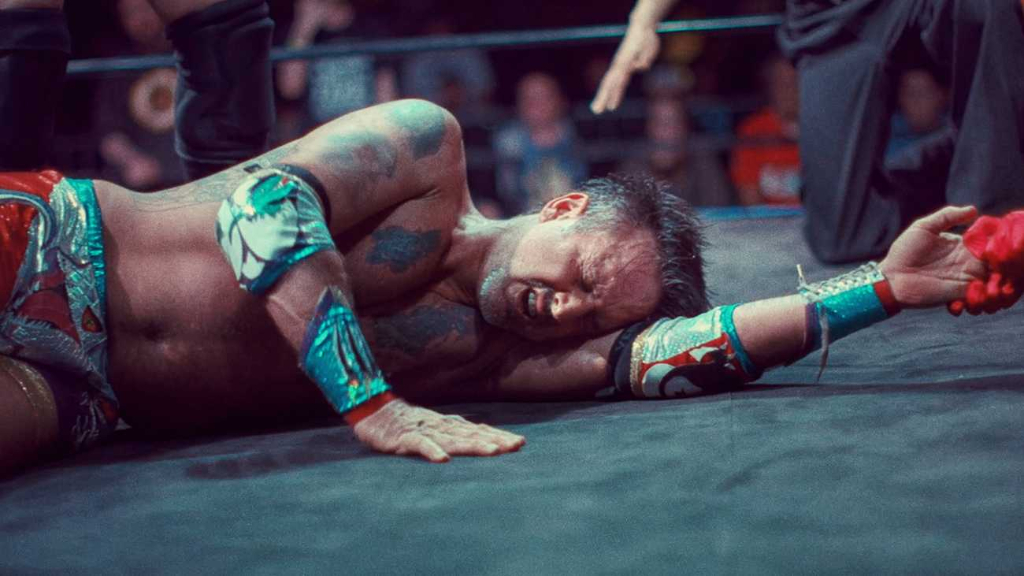 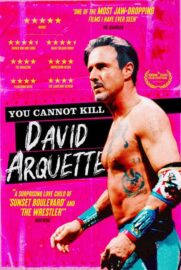 In the shadow of his gimmicky stint as WCW championship winner, Hollywood star David Arquette makes an eventful foray from his struggling acting career to train, toil and beat the odds to gain legitimacy as a pro wrestler and finally earn respect from the community he loves so much. The tale adequately fits the bill of a typical underdog journey – and is bolstered by its charismatic lead subject with insights into wrestling’s brutality – but You Cannot Kill David Arquette ultimately leaves a few blanks for us to fill.

While the film is punchy and doesn’t overstay its welcome (clocking in at a breezy 90 minutes), there is still some wiggle room for more of Arquette’s backstory, which is unfortunately glazed over. His failed attempts to jump back into the ring are given square focus too early on, so we have only a minor grasp of his motivations.. The actor’s history with WCW in the late 90s, the pressure for him to accept the championship, the politics surrounding the decision and the fan backlash that ensued are brushed over in the opening titles and with a few off-hand comments. The full, fleshed-out story is never stressed. Combine this with a lack of interviews of Arquette at every step of the way, his struggles and desires to redeem himself feel much too undercut throughout.

Although lacking detail, the documentary nicely highlights the various obstacles in the actor’s way back to the ring, namely his health troubles and inability to get in shape. Everyone in Arquette’s life is interviewed, from his ex-wife to his physician. They offer their thoughts on the star’s crazy exploits, his love of wrestling and endearing want for success in a field that will likely always be out of his reach. The wide-eyed, undying love for wrestling is quite magnetic and his eccentricity and sense of humour keeps the narrative funny and lively, even for the uninitiated. Chief highlights include Arquette showing off his wrestling persona at a photo shoot and his comedic underwhelming convention appearance.

Other detriments to You Cannot Kill David Arquette are sparse but not harmless; a pivotal training sequence in Mexico threatens to stall the movie and includes an obstacle that feels awfully staged; famous wrestler Rick Flair shows up for about 20 seconds of screen time; and the Scream actor unfortunately never interacts with the diehard fans who have scorned him for 20 years, which could have made for a great conflict away from the ring. In the ring, however, is where the feature finds its brutal emotional pull, showing just how dangerous and bloody a sport wrestling is and questioning anyone who dares label it “fake”. Even if the fights are predetermined and sometimes reliant on novelties, Arquette deserves props for both refusing to go down in history as a joke yet still managing to be pretty funny in the process.

You Cannot Kill David Arquette is released digitally on demand on 23rd November 2020.

Watch the trailer for You Cannot Kill David Arquette here:

Rob and Nick Carter on Connaught Village’s public neon installations: “Accessibility of art is crucial during a pandemic”
Erik Lorincz on Mayfair bar Kwānt: “I want you to forget about time and be taken away from London”