John Carter: Disney’s sci-fi epic is mad but worth it 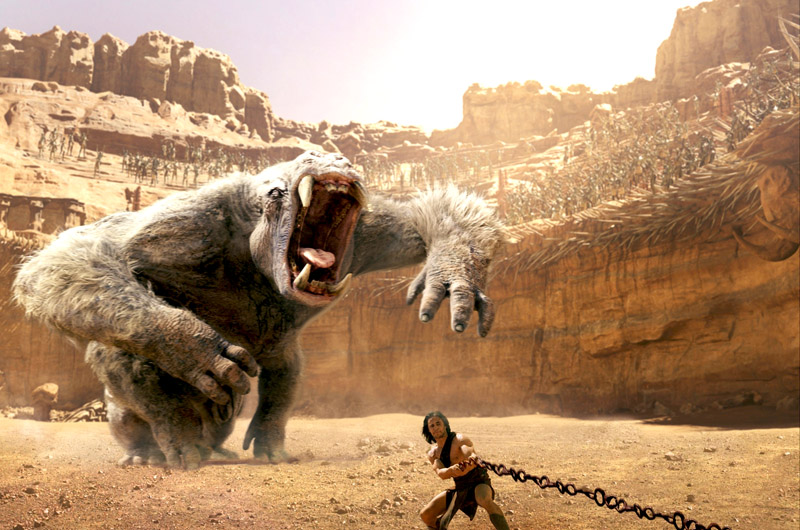 John Carter: Disney’s sci-fi epic is mad but worth it | Movie review

Andrew Stanton’s John Carter hasn’t had the best press. Rumours of a bloated budget of $250m and nervous executives have had those in the know awaiting a turkey of interplanetary proportions.

However those sharpening the knife will have to sheath it, at least in terms of criticising the film itself. With fine performances from its main and supporting cast, with Taylor Kitsch as Carter and Lynn Collins as Martian princess Dejah Thoris, a story that intrigues and fabulous CGI 3D visuals, John Carter isn’t a film bad enough to wish that it had never come to Earth.

Based on the novels by Edgar Rice Burroughs, the film starts in the second half of the 19th century as captain John Carter, a former confederate cavalryman desperate to find a cave of gold only he believes exists. After an encounter with a mysterious monk-like figure, he is transported to Mars (Barsoom to the natives) slap bang into the middle of a civil war threatening the planet. Captured by a strange race with four arms called Tharks, Carter soon finds that on Mars he has superhuman strength, which may enable him to help the beautiful Princess Dejah harness a seemingly mystical energy and save her people. Complicating matters are mysterious figures manipulating the warring tribes with the same powerful force.

So far, so bonkers, and one can see what made the executives nervous. Expectations were clearly raised in the wake of the success of James Cameron’s Avatar, but is a completely different film. It has a subtlety which that particular blockbuster lacked, what is less clear is whether it will find a large enough audience to justify Disney’s outlay.

The best sci-fi stories inevitably contain allegories to real-life issues; John Carter is full of them. There’s the reconciling of science with religion, the cold war, free will and environmentalism. One scene in particular is both haunting and exhilarating: Carter fighting off a horde of Tharks intercut with a dark episode from his past, the sort of thing you’d find in a movie aimed at a far older audience.

One was left thinking that it was straining to be a more adult film than its 12a certificate but was constrained by having to justify its budget by attracting crowds hoping to see a family friendly special effects spectacular.

If you’ve come for the whirring CGI and epically rendered battles, you won’t be disappointed; but you will have to persevere with a plot and themes which don’t give up their secrets easily. As such it rather falls between the two: thought provoking but lacking bite, visually stunning but requiring a lot of the audience.

Where it fails though, John Carter fails for the right reasons, trying to bring a complex story to a wider audience. Fans of Science-Fiction should be glad that the film was made, and one can only hope that Disney’s executives are and allow Stanton to bring Burroughs’ later John Carter novels to the screen.

Discover why the title was changed to John Carter here: