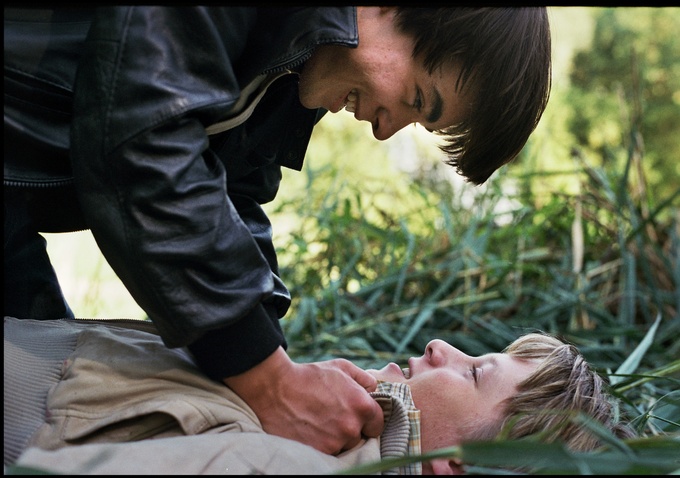 Set in a small coastal Belgium town, North Sea Texas is a touching coming-of-age drama telling the story of teenage dreamer Pim (Jelle Florizoone), who falls in love for the first time with his handsome neighbour Gino (Mathias Vergels). North Sea Texas is released in cinemas on 6th April 2012.

As a child, Pim has always been fixated on Gino and in the midst of adolescence they make the progression from friends to secret lovers. However, with first love comes Pim’s first experience of heartache and thwarted passion.

Director Bavo Defurne’s first feature North Sea Texas, adapted from the book This Is Everlasting by André Sollie, continues the themes of love and loss explored in Defurne’s highly praised short films. Selected to close this year’s BFI London Lesbian and Gay Film Festival, Defurne’s poetic debut has been eagerly anticipated by fans of the cult director. The young cast are perfect for their roles, with Defurne taking the time to audition over two hundred individuals before finding actors for Pim and Gino that were best for the parts.

North Sea Texas is not a film of high drama but of personal relationships. Pim lives with his single mother Yvette (Eva Van Der Gucht), a former beauty queen who has unfulfilled desires of her own. As an accordion player, Yvette regularly takes off for performances and spends her nights out, leaving Pim by himself. Waiting for her at the Texas bar, he’s teased by locals about not finding a girlfriend. Dreaming of Gino and his motorcycle is an attractive retreat for Pim from the banality and frustration of life in a small town.

Despite the potential for the mundane to permeate the film – even ticking clocks are audible – it is not realism that Bavo Defurne most wants to capture in the story. Talking of his work, Defurne is quoted as saying, “I don’t want to show people what they see when they look out their windows. I want to show what they can see when they close their eyes.”

The quiet Pim is an engaging character with a rich interiority for Defurne to utilize, as an introvert who spends most of his time drawing. His portraits on coasters, as he sits in the bar, are often carelessly spoiled by others slopping their drinks over his work. In a hidden shoe box, he collects intimate mementos of those around him including his mother’s beauty queen crown, the wrapper of a chocolate bar once given to him by Gino and a significant rag of material. Pim boxes up his longings along with this odd collection of things and stores them away from the eyes of others.

The story develops further complications as Gino’s sister Sabrina (Nina Marie Kortekaas), is as infatuated with Pim as he is with Gino. Later on, the arrival of carnival worker Zoltan (Thomas Coumans), who becomes an object of desire for both Pim and his bored mother, adds to the tangle of relationships.

North Sea Texas is a beautiful work of art in motion. Bavo Defurne pays as much attention to colours and the play of light as any visual artist, using each scene as a canvas. Vivid reds, yellows and oranges communicate the romance and passion of the storyline. Defurne also celebrates the male figure, with plenty of shirtless shots capturing the simple aesthetic value of the human form.

The setting on the Belgian coast allows for romantic scenes of wind-swept beaches with swaying reeds, which make for beautiful viewing. The sparse and isolated backdrop perfectly reflects the loneliness of the characters as they each deal with their personal dilemmas. The repeated refrains of the dreamy soundtrack with soft vocals adds to the artistic quality of the film.

Defurne has spoken of hoping to tell a universal story about the tender desire of first love. Slow and contemplative, with some moving performances, North Sea Texas is an emotional and affecting debut.