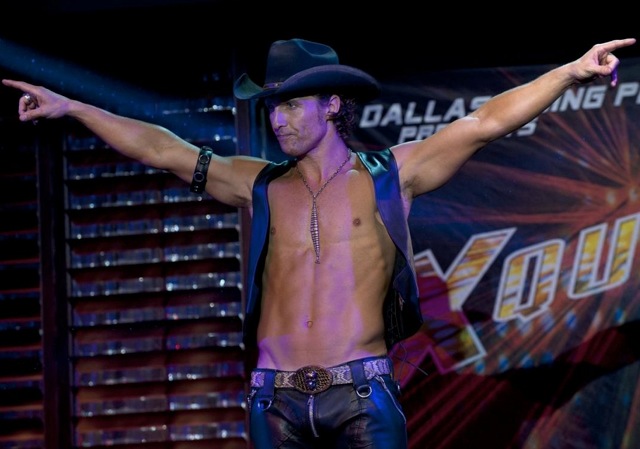 Magic Mike is Steven Soderbergh’s latest effort, ostensibly based on Channing Tatum’s brief stint as a stripper before finding fame as an actor.

Mike (Channing Tatum – 21 Jump Street, Haywire) is a construction worker, car detailer, maker of awful furniture and stripper. While at one of his plethora of jobs he meets 19-year-old The Kid (Alex Pettyfer) and introduces him into the world of male stripping. While charting the ups and downs of the life of a stripper, a burgeoning romance blossoms between Mike and The Kid’s sister Brooke (Cody Horn).

Magic Mike is an almost impossibly strange film that at times presents itself as a comedy and at others, a serious look into the pitfalls of stripping. The problem being that the depth of insight into the problems faced by the strippers wouldn’t be able to drown an ant.

The Kid takes drugs once, the next time we see him, he’s off his face and involved in drug dealing. The whole set piece is done within minutes. Some of the scenes with people on drugs are genuinely well acted and realistic, however Soderbergh makes the cardinal sin of shooting one of the drug scenes as The Wacky Montage. Flashing different coloured lights and snippets of crazy antics are used to show a wild night out. It’s obscenely basic and one would expect better of a veteran director such as Soderbergh. The comedic sections are where the film flourishes. Some of the backstage antics at the strip club are very funny, especially the scene with the penis pump.

Matthew McConaughey plays Dallas, the strip club owner. It is a truly funny performance but one has the sense that McConaughey was trying to play the role straight and serious but ended up at over the top lunacy. Intentional or not Dallas is one of the films comedic gems with even the sight of him bringing laughter from the crowd.

Tatum proves yet again that he has a great deal of acting skill and a surprising amount of comic talent, portraying Mike as a charming, funny guy. Alex Pettyfer has the rather thankless task of playing The Kid but does so ably. The only real let down is Cody Horn; as Brooke she is supposed to be the one “normal” character but comes off as smug and annoying.

The film employs a bizarre framing device of arbitrarily announcing what month it is. The events of the film inexplicably take place over three months in a ridiculous narrative pacing faux pas. If anything the monthly announcement makes the already too long 110minute running time and makes it feel longer. The problem being that not a lot is achieved in this time: Mike tries to get a loan to start a business but can’t due to a bad credit rating. He vaguely talks about the atrocious furniture he designs, that would look at home in the basement of a serial killer that loves The Fast and The Furious. The Kid takes some drugs. Mike and Brooke fall in love. Mike puts forward the idea that he’s more than just a stripper. All of these events are so lightly explored that none of them have any import or focus.

So where do all the 110 minutes go? Grotesquely extended stripping scenes of course! There are far too many scenes that show the strip tease from start to end. Soderbergh seems to have been caught in between making a serious film, a series of strip shows and a comedy.  By devoting so much time to the scenes where people are getting naked the rest of the story gets lost. At the same time the movie doesn’t achieve being a fun movie with plenty of eye candy, there is too much seriousness thrown in the mix.

While Magic Mike may have its moments the final result is a strange mess. A well directed, shot and acted mess, but still a mess. The audience for Magic Mike will most likely be disappointed. It’s not serious enough for cineastes. It’s not funny enough for a friday night popcorn flick. It’s not titillating enough to be a saucy night out for the girls. It will no doubt perform well at the box office, however the marketing of the film is odd. Semi-naked men with “Hello Girls” plastered on the poster doesn’t exactly scream seriousness and is at odds with the moral of the movie. Soderbergh needs to find his form again soon.