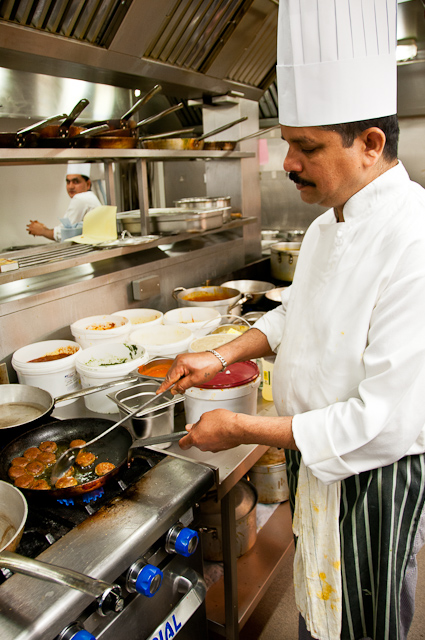 Bombay Palace resides in a top-end location near Marble Arch matched by an interior of simple elegance – dark red walls and furnishings around immaculate white tablecloths, pebble-shaped mirrors stylishly dashed over the back wall, and forests of glass surrounding the subtle lighting. Bombay Palace on Connaught Street is London’s branch of an Indian restaurant established across the northern hemisphere. The first Bombay Palace was opened in 1981 by the former fighter pilot Sant Chatwal. Chatwal grew up in the Indian half of the Punjab region that straddles India and Pakistan, and his restaurants focus on the cuisine of his childhood, consumed in the years before his restless adventuring had led him to fly around the globe, settle briefly in Ethiopia, and then strive to establish himself in several of the world’s great cities. Bombay Palace now has eight branches from New York to Kuala Lumpar. Punjabi cuisine is remarkable for having fewer hot dishes than many other regions of India, and for its alternative focus on creamy marinades and, especially, charcoal-cooked tandoori dishes. The London branch has just undergone a massive refurbishment, and while the outside still needs a lot of work, its interior is looking very sleek. The staff is infused with a greater focus to make the revitalised restaurant a success, and is warm, friendly, and knowledgeable about the food it is serving.   Despite the reasonably large size of the room in which we ate, the warm well-matched colour scheme made it feel cosy – a very relaxing, comfortable ambience allowing one to forget one’s cares and lose oneself in the eating experience. With a few tweaks everything will be very well set-up for when the restaurant re-opens to the wider public in August, but what of the most important ingredient: the food itself? We sampled a diverse range of what the restaurant offers, encompassing meat, fish, and vegetarian dishes. The starters incorporated two dryer offerings of lamb and prawn, and a creamily marinated chicken tikka.  The lamb was a disc of shikampuri kebab, mingling the meat with lentil and delightfully flavoured with chopped onion and mint, neither flavour sharp, and the whole, harmonious.

The starters were followed by main dish Tandoori Jhinga – a truly enormous prawn flavoured with herbs and superbly cooked in a clay oven, resulting in a flesh that was juicily tender throughout.  The chicken tikka was among the most straightforward of the dishes offered in the evening, but its quality was still immediately apparent: the yoghurt marinade infused with spices and each soft, mellifluous bite a noticeable refinement of a familiar flavour; we were swiftly seduced by the starters alone. The mains involved a similar range of chicken, lamb, and seafood creations. The chicken again rested in a creamy sauce, tomato-based and slightly smoky from the barbeque – it was probably the most forgettable of the evening’s meat dishes. Following this was the Goan kingfish curry, the menu stepping beyond the culinary culture of Punjab into the tropical, coastal terrain of Goa, situated along the Arabian Sea on India’s west coast. The change was immediately noticeable in the sharp, strong spice of the dish, which was well balanced by sweeter mango and coconut. Finishing the meat offerings, and perhaps the night’s highlight – drawing rapturous acclaim from my eating companions – was Changezi champen, a beautifully tender, medium-rare lamb cutlet that on serving appeared to be layered with moss. This moss was in fact an intricate marinade of mint, fennel, pepper and yoghurt, and biting through these delicious flavours to the soft flesh of the lamb beneath, and letting the concoction rest on one’s taste buds for an almost unseemly length of time, was perhaps the highlight of a generally excellent meal. The vegetarian offerings, served to my veggie companion, were less spectacular than the meat but still included some memorable moments. The Palak Panner, fresh cottage cheese gently cooked then enveloped in a puree of spinach and bay leaves, was meltingly gorgeous. The Tarka dahl was a little disappointing, somewhat bland and a little watery – but a lentil-based dahl was always going to struggle to stand out, coming directly after the storm of flavours and textures we had devoured up to that point. At this stage in the evening, having been unable to resist sampling all the vegetarian options as well as the more-than-sufficient quantities of meat and fish, we were utterly and overwhelmingly stuffed. But, of course, we had to try the puddings, which managed to extend the interesting diversity of the food offered so far. The home-grated carrot fudge was soft, warm, and sweet; a green circle of pistachio ice cream was – well we can’t really remember, so saturated we were by this point in the tastes of Punjab and Goa.

Bombay Palace is glamorously situated, warmly decorated and welcoming. But its perfectly cooked and imaginative dishes are what really make it stand out, with an especially superb use of the tandoori oven. It offers an excellent and authentic introduction to Punjabi cuisine, and the opportunity to sample delicious food from elsewhere on the Indian sub-continent.

For further information on Bombay Palace and to book a table click here.