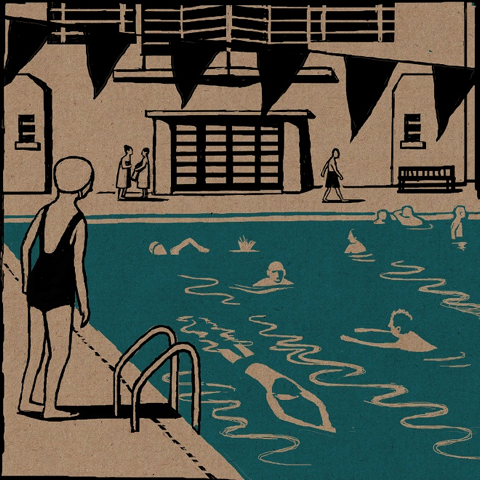 Darren Hayman, lead singer of the now inactive urban folk band Hefner, has decided to go a different route to what listeners expect, with the release of his instrumental album, Lido. Last night he still focused on lyricism by playing songs off his upcoming concept album from the Essex Trilogy series – The Violence, with a release date yet to be confirmed, and songs from his previous solo albums. Tracks like I Taught You How to Dance and Eastbourne Lights showed the importance of the folk influence that helped form Hayman’s music while still enabling him to be flexible with the genre; incorporating indie vocals with slow jazz drumming and even electronica.

But Hayman went on to stress the significance of how listening to a lot of instrumental music has shaped him as an artist. Lido is fourteen tracks of serene, guitar-based music, defined by simplicity and with a theme of outdoor swimming pools. The aim of the album, according to Hayman last night, is for each track to paint a picture of lidos, with a nostalgic feel for the one in particular that he grew up using in his hometown – now defunct. There was even a small exhibition of art at the end of the show: a painting for each track on the new record.

One may be reminded of Daniel Johnston when listening to Hayman’s unique, folk inspired voice, and his band certainly deserved credit for accompanying him to paint the tranquil scene he aimed to with the promotion of Lido. With a violinist using an iPhone against the microphone to play the sounds of a public swimming pool (sounds rather makeshift but it worked very well), Hayman could recreate familiar sights that we all too easily forget, and Lido is worth checking out for all those who, like the performer last night, respect music even when it is absent of lyrics.

Lido is out now on Clay Pipe Music, order here.

Listen to Lido and get more information on the record from his blog.