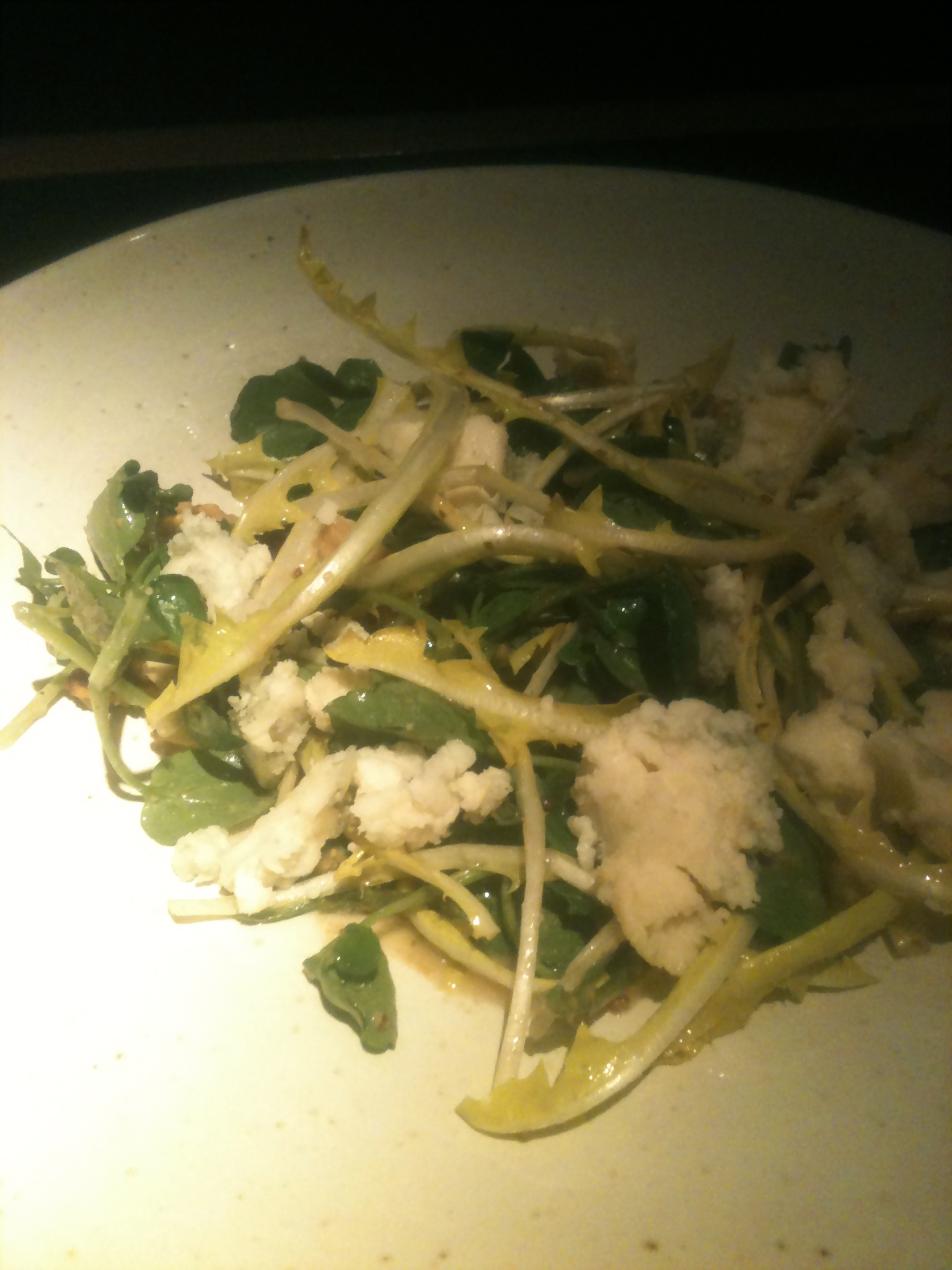 With its chic décor, integrated menu and slick service, you could be forgiven for thinking that 3 South Place in the new South Place Hotel is something of an institution. In fact, this self-described “all-day British diner” opened scarcely more than a week ago. By night, the full glass windows of the ground-floor bar and restaurant give off a comforting glow worlds away from the bustle of nearby Liverpool St station. The décor exudes a sense of minimalist elegance executed in dark colours, clean lines and golden light. The bar is furnished with coffee tables and squat square lounges, while the restaurant itself sports a huge banquet table and pop-art prints featuring quintessentially British condiments (brown sauce, anyone?). Clean yet comfortable, it sets the tone for the menu: solid, stolid British cuisine with a strong emphasis on provenance (British, of course).

The menu itself is large in every sense: at a single A3 page it is nothing if not unwieldy, and it offers a comprehensive and slightly daunting selection of salads, seafood, pies, offal, classics, meat, sides, desserts, sandwiches… you get the picture. On the reverse is an equally extensive drinks menu with a thoughtful selection of wines, juices, coffees and herbal teas. You get the feeling that not a single aspect of the menu has escaped thorough consideration; meanwhile, wait staff are more than happy to oblige with wine and food suggestions.

We chose a glass of 2007 Nyetimber Classic Cuvee and a Camden Hells Lager to accompany our basket of house-made bread (warm and just-toasted), followed by a carafe of 2011 Skillogalee rose (aptly described as “a red wine in disguise”) to accompany the meal. Service was fast and friendly, and it was almost impossible to get to the bottom of a glass without someone stopping by to top it up.

Our starters could have come straight from an English country garden: the Pea, lettuce and mint soup (£5.50), and the Dandelion and wild watercress salad, Beenleigh Blue, walnuts, mustard and honey (£7). The soup was foamy and vividly green, topped with a tangle of fine-cut mint and iceberg leaves to add flavour and crunch. I still had some bread left, but the full-bodied soup was just too good to dilute. My companion’s salad was fresh and perfectly balanced, the sharp tang and stemmy texture of the leaves mellowed by the creaminess of the cheese (apparently one of just three British blues made with ewe’s milk).

The crumbs were carefully swept from the table while we waited for our mains. The Wild mushrooms, fried duck egg, grilled sourdough (£9.50) was rich and earthy, a just-set egg perched on a tumbled stack of chewy mushrooms. The density of the sourdough slab underneath was almost too much with the dark mushroom flavours and the creamy-yolked egg – I found myself longing for something lighter and crispier to balance things out a little.

I couldn’t eat in a British diner without sampling their take on an absolute classic – fish and chips. The Day-boat cod deep fried, triple-cooked chips, mushy peas, tartare sauce (£13.50) featured a densely-herbed tartare sauce with plenty of capers and chunky peas with a whisper of mint. The chips were well done and the batter on the fish – although a little too salty for the delicate fish flavour – was delightfully crisp.

We were urged to try the chef’s signature dish – Lobster “Mac”: macaroni pasta, chopped lobster, lobster bisque & hollandaise sauce (£11.50 for an entree-sized portion) – fat worms of pasta and chunks of tender lobster meat resting in an intensely creamy sauce spiked with finely diced tomato. Unfortunately the flavour, while delicious, was no match for the overwhelming richness of the dish, and I couldn’t eat more than a few mouthfuls. I turned my attentions instead to the tomato and red onion salad (£3.50) – fresh crispy heirloom tomato chunks tossed with fine-diced red onion, chive and a light sweet peppery dressing.

For dessert we shared the Jubilee strawberry & pistachio mess (£6.50). The pistachio meringue was a pleasant surprise, as were the delightfully fresh strawberries and the occasional bite of salt with the pistachios. That said, it was the richest, heaviest mess I’ve ever tried – more of a winter dessert than a summer one – and after the weight of the rest of the meal we couldn’t really do it justice.

I should probably mention here that I’m a fairly new initiate to British food. With a palate nurtured on sharp, zesty Asian flavours and various other hot-climate cuisines,  it could well be that I’m just not British enough to appreciate the sheer heaviness of 3 South Place’s food. Perhaps, too, we inadvertently chose some of the richest dishes on the menu. On the other hand, the concept of comfort food can only be pushed so far before it topples beyond the limits of comfortable edibility. The wild mushrooms, Lobster “Mac” and the mess could all have benefited from a lighter treatment, without sacrificing any of their “Britishness”.

That quibble aside, 3 South Place is clearly run by a highly competent team of chefs, sommeliers and waiting staff. Every aspect of its presentation and menu has been thoughtfully and carefully executed, and it has none of the unsettled air so common in newly established venues. I’d venture to suggest that it will be a star attraction of the area for a long time to come. It certainly seems quite comfortable there.

To make a reservation or browse the menus click here.