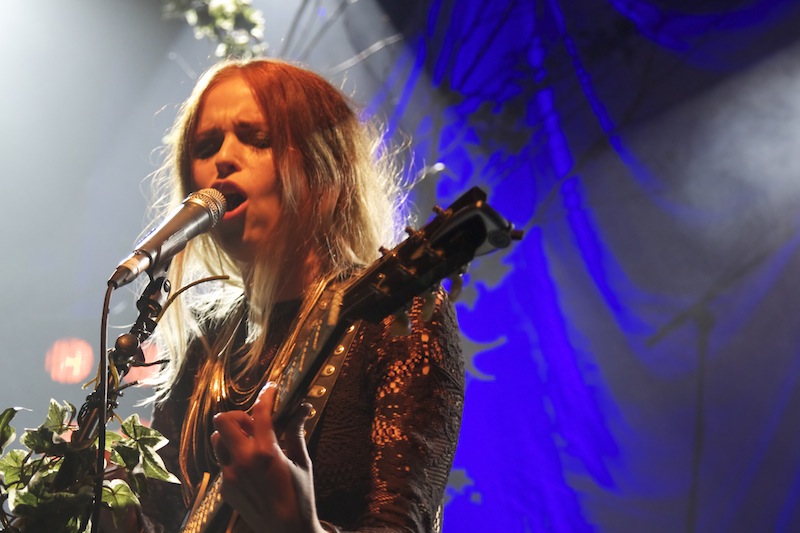 Scala nightclub in King’s Cross had a gothic and mystical ambience about it last night when Kyla La Grange played live. Supported by Sons of Lovers and Storybooks – who hardly fitted the stage that was made to look like a forest (with branches and flowers picked by the main act herself), La Grange came onstage and created a supernatural feel about the venue. With face painters in a corner of the venue just opposite the bar to bizarrely dressed – almost frightening – men on stilts who looked like they had been plucked out of a Neil Gaiman novel, the situation was right. But what about the performance? 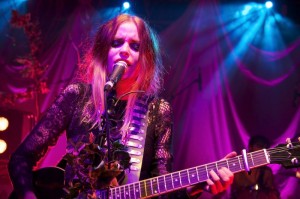 Playing songs from her debut, for a singer who supposedly likes “sad and miserable” music, she remained quite upbeat during the show, telling deadpan jokes and constantly giving her regards to the crowd. Wearing a black dress and barefoot, La Grange’s guitar was comically too big for her petite frame. Her voice was too big as well, but impressively big, rather than comically.

Beginning the set with Woke Up Dead, the venue immediately soaked up her unique timbre and reverberated, country inspired guitar strumming. The heavily female orientated crowd were spellbound by opening chants from this melodramatic pixie – she seems to have gathered quite a cult following.

Talking about lost love, failed relationships and other despondent topics that a lot of young women were touched by, Kyla La Grange likes making music about “being really fucked up”. Been Better was a perfect live song to show off this particularly dark charm of hers – with the very memorable riff, her very on-point band providing backing vocals and her booming voice, the crowd were absorbed by the sombre almost-clichéd-but-acceptable tone of her performance.

Switching to an acoustic guitar for Vampire Bite, the best song to listen to for those who need a first taste of La Grange, it was possibly the best song she played during the set – purely for its macabre lyrical wittiness and switch from the folk-inspired chorus to a more relaxed ending.

When she cheerfully bounced back on the stage for the encore, Kyla played a new song because she was fed up of “playing the same songs”. It was acoustic and mellow and fantastically apt for finishing the gig. Though gloomy and a little overly emotional, La Grange has a skill of creating a poignant atmosphere for a crowd and to call her musically sound would be an understatement – she has a lot to offer in the future.

Visit Kyla La Grange’s website for more information and the chance to listen to some of her songs.

Watch the video for Been Better here