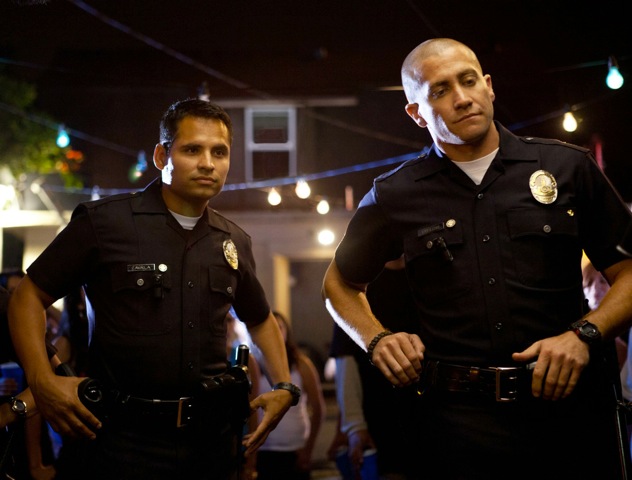 End of Watch is a film that feels unripe. Watching it, one feels like it needed time to settle and allow its more exaggerative quirks to fall away, leaving only the meat at the centre. As it is, the film is a strange mixture of broad strokes and hyper-violent drugs-versus-cop film, slow-burn bromance, and found-footage/documentary of life on patrol. It hints towards (but never a satisfying exploration of) the lives of police wives, patrol-level police corruption, and reasons for becoming a cop, joining the fraternity.

Writer/director David Ayer is probably best known for writing Training Day, and since then he has written numerous cop-centric screenplays and directed two, both set within or in the shadow of the LAPD, and his eye for realism and technical detail is hugely admirable. However, End of Watch’s reach to be an altogether more realistic film than Ayer’s previous is the cause of both its triumphs and weaknesses.

End of Watch follows a few months in the work and home lives of young LAPD officers Brian Taylor (Jake Gyllenhaal) and Mike Zavala (Michael Peña). They patrol, passing the time with banter about their wives and girlfriends, and we are witness to a cross-section of South Central’s more recent criminal issues – street wars between Mexican and black gangs, human trafficking and drug addiction. The cast is rock solid.

The cast is rock solid, and if anything performs their roles with more depth than the script will ultimately allow them. On-screen in practically every shot, Gyllenhaal and Peña become increasingly believable and endearing as a childlike duo of up-and-coming cops with big hearts and nickel heads, utterly dependent upon the women they love. Said women, Gabby (Natalie Martinez) and Janet (Anna Kendrick) are great but disappointingly, rarely seen and underdeveloped. The film deals, albeit very broadly, with the issues faced by wives of policemen, forever wondering if their husbands will make it home to see them and their children again. But this fascinating area, like several others, is not well illuminated.

With more time on-screen, one also hopes Taylor and Zavala are explored more than they ultimately are. The film’s opening features a videogame-like heads-up display through the windscreen of a patrol car, the two chasing down and killing a suspect. Much of the film resembles this videogame aesthetic, and is one of many things which suggests that the moral and psychological complexity of these standard-issue lawmen will be dissected.

Gyllenhaal is at first pretty unlikable, pompous, desperately masculine and cocksure. The tables are set for a complex exploration of masculinity and self-empowerment through one’s badge. Come the early scene in which Zavala strips off his gun and badge to brawl gangster-style with a suspect, the film seems to be ready to open up these characters and the troubling moral-maze within which sits the LAPD, much as Training Day did with regards to police corruption and ladder-climbing. End of Watch is released on 23rd November.

This is all proven to be deception though. The central thrust of the film focuses on the brotherhood formed between these two men, but with painfully little complexity. Running motifs are thrown in for good measure – violence towards children being the most notable – but we are given less thematic meat than the film seems to think.

Additionally, while the film impressively eschews a traditional narrative, favouring a documentary-like approach – events simply occur with little connection for the film’s first 90 minutes, until a strand of cause-and-effect brings proceedings to a close – this is sustained primarily by banter, engaging as it is, and what feel like contrived day-to-day occurrences. Remarkable finds on patrol mount up surprisingly often for this pair. (This feels a somewhat unfair criticism, but the film’s emphatically digital-realistic camera and dialogue grinds slightly uncomfortably with such contrivances).

This all being said, the film has a thrilling immediacy, it is well-paced, and the characters have a certain charm – even if they are allowed to quietly go about their morally-dubious business with little insight.

Watch the trailer for End of Watch here:

End of Watch is released on 23 November.