Linnea Olsson at The Slaughtered Lamb 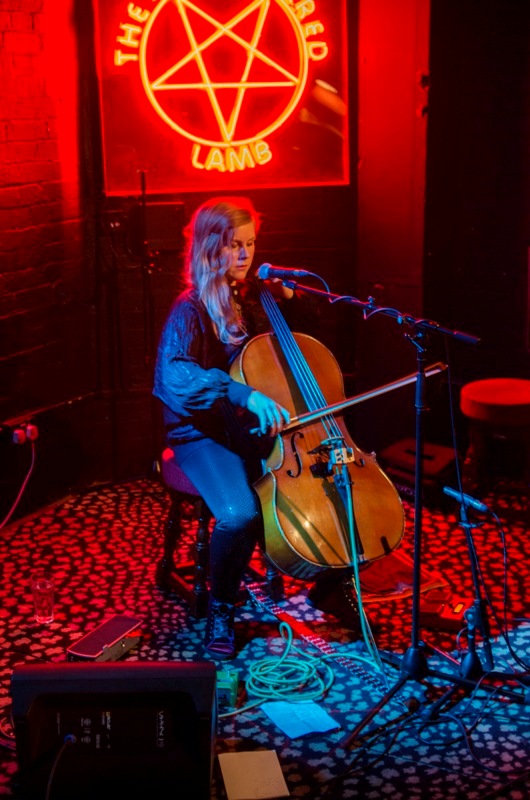 Deep in the homely, intimate basement of The Slaughtered Lamb we are introduced to Linnea Olsson. A songstress hailing from Sweden, Olsson is over here on a short tour of the major cities and towns of the United Kingdom. London was the setting for the musician’s own incredible brand of ”fantasy cello pop” utilising her implausibly perfect vocal, with genre-defining simultaneous looped cello  and music she penned for our delectation. With a hint of Kate Bush and a dash of Björk, she made incredible use of her ingredients. The 1980s influences were apparent throughout but redefined for the digital age, making Olsson the ultimate one-woman band.

The loop machine, a product long used for a laugh or a laboured gimmick, is reinvented by Olsson, especially in her song I Am Younger, where perfect timing is coupled with moving vocals to create a song she described as “tear jerking” – and rightly so, it’s a truly moving and distinct song. Layering tracks on the fly in such a way is a talent on its own, writing truly stimulating music is another. Playing the cello, singing and performing are also impressive talents, but combining them in such a spectacular way on stage is in a whole other league of brilliance.

After her first instrumental, a modern classical masterpiece, she settled the timid audience with her airy, chilled out attitude, cracking some jokes and introducing herself in real show-woman style. Each composition she performed impressed in a different way: one highlighted the singing, the other her skill on the cello, the next her improvised production style and finally her ability to get down to brass tacks and make a marketable pop song that sounded extraordinary.

All in all, in the impressive surroundings of The Slaughtered Lamb in front of an awed crowd, Linnea Olsson excelled and astonished. The artist needs – no, must – be seen, heard and experienced to be believed. Listen out for her; you will hear her name soon.