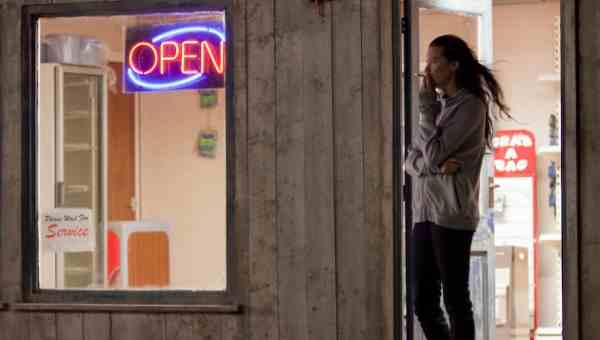 The film follows Shell (Chloe Pirrie) and her father, Pete (Joseph Mawle) who, as a result of living at a remote petrol station situated in the wilds of the Scottish Highlands, share markedly denuded lives. Pete tends to wrecked cars in his scrapyard while Shell greets and serves the patrons who frequent their tiny garage.

As the pair tacitly interact, their painfully muted dynamic is established: she undertakes the commonly perceived uxorial tasks – prepares the dinner, takes care of the laundry, tells Pete when he needs to get a haircut – and he despondently goes about his work. Yet there is something palpably not quite right with their relationship, and it is only as a result of an early chance encounter with a couple passing by that an uncomfortable truth is affirmed to the audience.

From this point in the story the drama shifts up a gear, and a general sense of unease sets in as it becomes apparent that – now on the eve of womanhood – Shell’s behaviour has reached a level that Pete (and indeed, the audience) has become uncomfortable with.

If Shell sounds like a difficult watch, it’s because it is. Fortunately, it also happens to be an impressive film.

This study of loneliness and need for human affection is remarkably accomplished for a debut picture.  Aided by superb performances from the two leads, Graham emphasises his script’s disheartening tone with starkly rendered visuals of the Scottish landscape, and some noticeably terrific sound design (a boiling kettle, use of a toilet, and howling winds, are all amped up to agonisingly oppressive levels).

The film’s lean 90-minute running time prevents it from ever becoming stagnant, and its ending offers just the right amount of fulfillment to counteract – without undermining – the somber drama that precedes it.

Shell is released in selected cinemas on 15th March 2013.

Watch the a clip from Shell here: