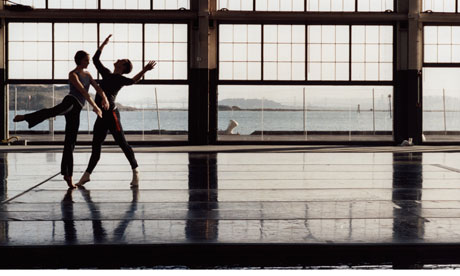 Deep in the recesses of Barbican Centre’s legendary Cinema 1, an audience buzzing with anticipation hurriedly filled every row to see former Turner Prize nominee and recent OBE recipient Tacita Dean’s latest feature-length work, Craneway Event. Having already captured the work of other important 20th century artists such as Leo Steinburg and Mario Merz on 16mm, Dean turns her attention to the famed choreographer Mercier “Merce” Cunningham, considered to be one of the greatest exponents of American contemporary and avant-garde dance. The film depicts a day’s rehearsal with Cunningham’s dancers, shot in the exquisitely chosen location of an abandoned Ford car manufacturing plant (overlooking the San Francisco Bay). Sunlight sparkles on the bay’s ebbing waters and streams into the vast, open spaces of the factory, playfully fighting with the dark shadows of the building’s interior and creating a wonderful sense of chiaroscuro in the most modern of senses. The backdrop of light frequently obscures the dancers’ faces, a move deliberately planned to keep focus upon the beauty of their physical movements, while a statuesque Cunningham looks on from his wheelchair.

Without music, the film purely focuses on the diegetic: the soft thuds and shuffles of the dancers on the tiled flooring, the reverberations of the technicians’ rolls of gaffer tape around the cavernous room, and the occasional resonant drawl from Cunningham himself, extolling his years of experience to the dancers in just a few, economically chosen phrases.

For some, the thought of 100 minutes of a nigh on single-shot film capturing expressive, interpretive dance could prove somewhat overwhelming, but Dean’s natural sense of cinematography and camera work is an irresistible factor, drawing the audience almost seamlessly into the factory itself. Clichéd though it may seem, the scenes on screen seemed to unfold for the very first time to virgin eyes. It would be remiss as well if the ability of the dancers wasn’t properly celebrated; so long the focal point of the work, they truly enraptured the audience.

Though Cunningham’s death was a tragic loss to the artistic community, Craneway Event becomes a beautiful homage to the work of a truly unique and innovative individual, and Dean continues to prove herself as one of Britain’s top conceptual artists. A triumph.